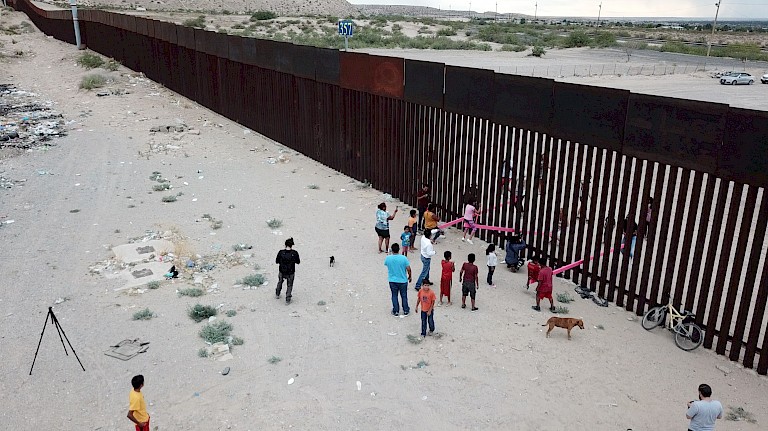 Teetertotter Wall was a project aiming to enter the socio-political arena in a playful way. The artists engaged in a creative process to find a mechanism for engaging in an angry, growing and hate-filled political discussion with a presentation that brings empathy and playfulness.

We are very pleased to announce that Teeter Totter Wall was the winner of the 2021 International Award for Public Art.

The following message is from one of the artists, Ronald Rael -

On behalf of Rael San Fratello, who is Virginia San Fratello and myself, Ronald Rael, as well as Omar Rios of Colectivo Chopeke, we thank you very much for this award. Receiving one of the most prestigious awards for public art is both an honor, and also a point of reflection for us. We never imagined that the humble event we created with communities on both sides of the border would be considered ‘public art’, although we always acknowledged that the border was ‘public space’ as it is a federally funded project paid for by tax payers, and the public should decide what happens in the borderlands. We recognize that the wall is an architecture of violence, and both Rael San Fratello and Colectivo Chopeke have for many years worked on ways to think about the issues related to solving those issues of violence at the border which have caused enormous humanitarian and ecological damage. Therefore, we accept this award with the understanding that the wall constructed between the United States and Mexico is fraught, and is a manifestation of xenophobia and nationalism that has resulted in the suffering of indigenous communities, particularly through the separation of children from their families. While this work of public art doesn’t solve the vast and complex problems created by the construction of the wall, we do hope it sheds light on this very important issue and allows everyone to see that the walls we construct between countries, between people of different cultures, different identities, belief systems, and skin colors are never productive, because the actions that take place on one side of a wall, just like in the humble teeter totter positioned on the fulcrum of the border, will have a consequence on the other. Thank you. 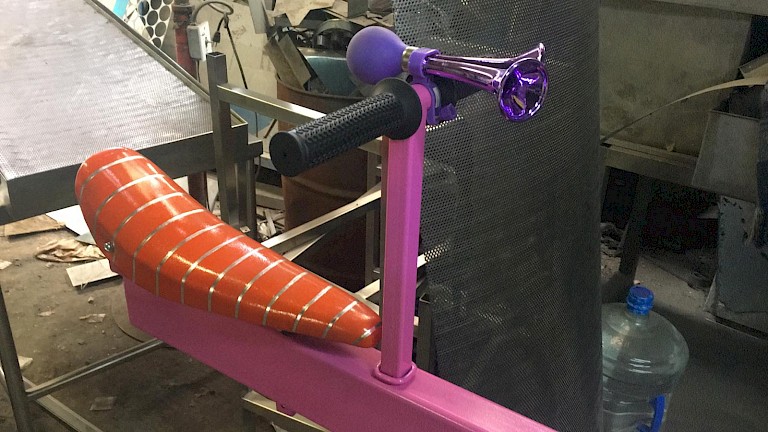 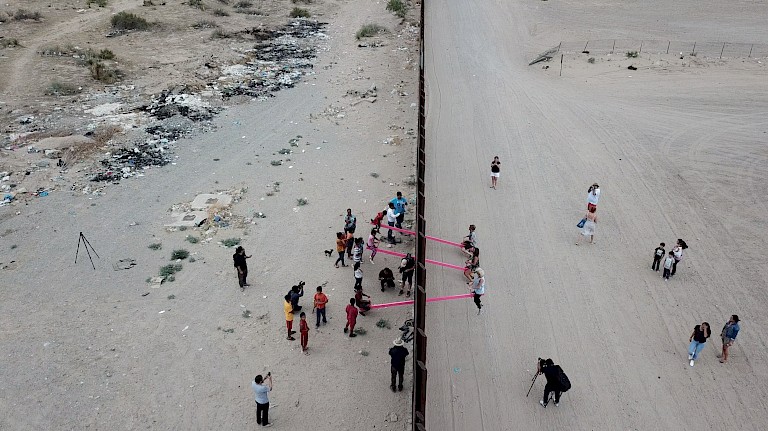 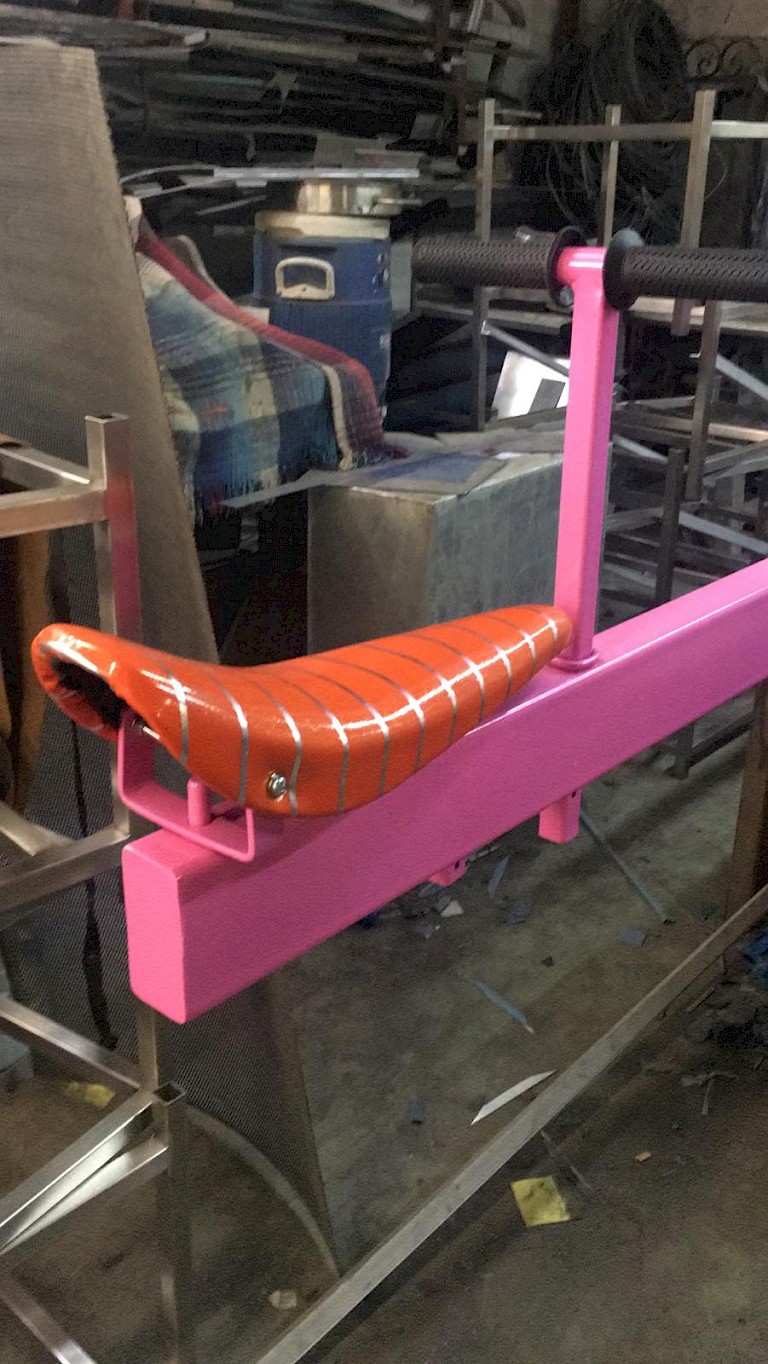 Teeter-Totter Wall was initiated by the practice of Ronald Rael and Virginia San Fratello (Rael San Fratello) in 2009 as a series of sketches, drawings, and models. They had visited the area in 2008 and had been going back to the site for years, developing deep connections and long-standing relationship with community members. In 2017, they wondered if it would be possible to construct this.

Ronald and Virginia had been involved in a number of projects in and around Marfa, Texas. They were architectural projects that increasingly became more and more political. They built an adobe house, something which hadn’t been constructed in years. Taxes were going up, and Hurricane Katrina had devastated a large portion of the Gulf Coast.
Then they built a second house, closer to the border. As they were working, a lot of questions came up for them about making things on the border. There were other projects [such as Prada Marfa] happening that investigated how architecture can communicate political ideas. In 2006, the Secure Fence Act passed, and the US government authorized and partially funded 700 miles of wall between US and Mexico. At this time, construction had started on the border wall between the United State and Mexico. Seeing the construction, Ronald and Virginia started illustrating and constructing stories about the wall and its consequences.

Ronald and Virginia started documenting and accounting for the illustrations they had made. Going back and forth between illustrations and conversations with community members, artists and creatives, and people living along the border. They developed a lot of relationships in SW Texas, from Marfa to El Paso. They held conversations with community members and asked, “what do you think if we did this?” Everyone thought it was cool and exciting, on both the Mexico side and the US side of the wall.

In the winter of 2018, Ronald and Virginia brought a robot arm to El Paso as part of an exhibition at Rubins Center. They were printing with mud on the mesa at campus, which overlooked the wall. Colectivo Chopeke came to see what they were making, and that started a long-term connection with this group of artists, philosophers, poets, and thinkers. In 2019, Colectivo connected them to fabricators that could help build the teeter totter.

This was a time when the national conversation was around increased child separation and the call for more walls. As children were being taken away from their parents at the border between the US and Mexico, it felt like time to create a bridge across the border rather than further separation, and Rael San Fratello felt this work was sufficiently important for them to do that they wanted to self-fund it. They were prepared to go to jail for this, as - even though it is in public space - the project could have been perceived as illegal.

The project is considered art across the world, but the artists themselves do not necessarily call it that. They think about it as an event, as activism. They are again blurring a boundary between art, spectacle, event, and conversation. This one piece of work has made those who critique it or engage with it in any way consider what it means for an item of play to cross between two countries that are separated by a physical structure with roots in fascist ideologies.

This project juxtaposes bright colors, youth, play, fun, and joy against policies and mis-beliefs anchored in nationalism, elitism, militarism, and anti-egalitarianism. One cannot help but engage in thought and conversations around these topics when looking at Teeter Totter Wall. This project challenges what the wall is – that no one lives there, that it’s filled with people doing bad things, that no one should go there. This project shows that is not the case – it brings a human story to the site itself, and makes the public think about what connects us all as people, no matter what side of a [non-necessary] wall we live on.

It is bold to have created such an act of resistance in the time that Ronald and Virginia created this project. It is also incredible that the mothers and children who engaged with this act of resistance understood the deeper meaning behind it, in a very public section of the wall where there are always journalists and tourists coming to see the separation the wall creates between people, resources, culture, and ideas.

A final note to put this in further perspective – the Teeter Totter Wall cost $900, and brought 40 minutes of joy to many children who have been dehumanized by this border wall. For the amount of money it costs to maintain the wall we could build 350 Seattle public libraries, or 500 miles of High Line. This project shines a light on what is really important and where our priorities lie.