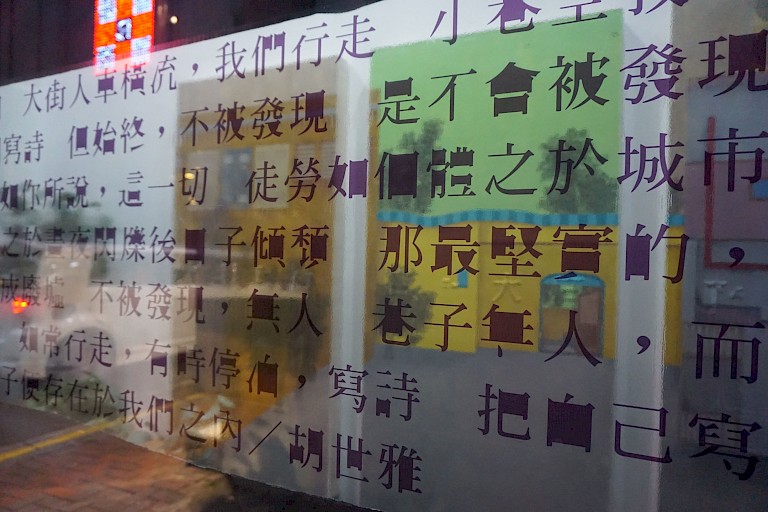 Alongside Poetry in an Alley

This is a site specific installation in a two-by-twelve-foot space rental unit on the ground level of a “Chinese building” in a back alley in Causeway Bay, Hong Kong. This kind of space is also known as “stairwell shops”. They are typically located under the stairwells of three- to ten-storey buildings. They have been integral components of the streetscapes of Hong Kong but have been rapidly disappearing due to urban redevelopment. This space was rented by Yang Yeung, researcher of this case, on a two-year contract from July 2015. Named A Walk with A3, the project, primarily aimed to compose experimental projects with artists to defend the right of art to be an integral component of pedestrians’ experience of streets in Hong Kong. The project Alongside Poetry in an Alley comprised of six “chapters” presented in A3 over two months.

The duration of each chapter and its content not fully fixed before the project launched. Each chapter emerged out of the artists’ off-site discussions and their gradually accumulating physical experience of the place.Chapter 1 focused on the artists’ personal memories of back alleys. The artists began by observing the locality of the venue and making sense of its physical presence in relation to their bodies and the surroundings. In one preparatory discussion, the idea of the comma came up. It was regarded as offering a hinge with which literature and visual art, specifically painting, could be abstracted into a different layer of meaning. There were also discussions about how the literariness of poetry and qualities of the lyrical in words could be translated into a three-dimensional space. In Chapters 2 and 3, the artists presented a total of 11 poems over a six-week period. The installation built onto Chapter 1, while shifting artistic attention away from the alley towards the shop itself, imagining it as a page in a book, a picture frame, etc. Chapter 4 presented poetry that was less narrative in content and style. Visual tactics that deliberately disrupted the linear format of writing and reading were used. There was no clear beginning or end of the poem that was inscribed in the space. Texts were also presented in multiple layers, materializing them as interwoven tissues (alluding to the idea’s etymological origin). Chapter 5 developed the layering tactic further: the emphasis was on a clash of textures between computer-generated characters printed on vinyl and traces of the hand in paintings on canvas. Some characters were broken up, others blotted out. While still legible, they took on a rhythm that seemed to sound out the action of printing itself. Chapter 6 as the last chapter returned to a more minimalist set-up. There was only one line of text, and one set of paintings that depicted A3.

In all, the project prioritized the collaborative creative processes through discussions and the gradual physical experiences of the space and place. Since the emphasis wasn’t on showing and public engagement, the artists’ collective had not record any audience reaction. However, when they were creating in situ, they noticed that the acts of ‘writing’ tended to attract more passers-by to pause and watch.

The project is a place-making one by materializing alternative visions for a place that is semi-private (in terms of property ownership) and semi-public (in terms of being part of the streetscape in Hong Kong). The project turns what is by default a shop or a shop window (due to the social organization of urban space and the imperative of the capitalist market) into a transitional space where literature and visual art meet. It produces a reality that challenges the hierarchy of value in public space and public reasoning. In streets that circulate texts that are predominantly composed for advertising products and services, where materials for buildings are monotonously glass, steel and concrete, the project intervenes with a different sensibility.

The artistic excellence of this project is multifold. On the artistic community level, the project engages poets with little or no experience in working with visual art in its spatial form to encourage understanding between the artists, to diversify cultural expressions. On the level of the publicness of art, the intervention of poetry in streets reveals that speech acts in public space are not evenly distributed. The poetry in the project reclaims the right to question and change the uneven attention different kinds of writing in public space are given. As an intervention to the back alley art space, the project breaks the silence of the non-place left out of urban ‘development’ – from being a particular case arising out of particular circumstances, it makes a general case for how voices left out of narratives of progress and urban design could also contribute to public shared life.

In addition to the showing, the process of the project is also an area of its excellence. The series of off-site discussions between the artists, some of which founder of the A3 was involved, contribute to community building among the artists. The brainstorming sessions also emphasized sharing and co-creating, which have been empowering. The socialization also contributes to opening up questions of identity that continue to be in the foreground of cultural politics of Hong Kong through shared personal memories and understanding each others’ experiences of inhabiting spaces. The generative process recognizes the individuality and freedom of each artist while being a collaborative process at the same time. There was careful and tacit regulation against any imperative to seek consensus or formulating rigid artistic directions. Maintaining this kind of process is conducive to the project’s purpose – exploratory in nature, not aiming at exhibiting or showing as an end of the process. The way the discussions unfolded translated into how the project appeared: the white space becomes like a window that transforms the alley into a different kind of texture. By inference and in alignment with the vision of A3, the project emphasizes the conditions through which a pedestrian could encounter art by accident. In view of the over-determining influence of standardized urban planning that gives priority to vehicular traffic and efficiently designed passageways that value speed of passing rather than meaningful dwelling, the project regards the streets in a more holistic light, as if asking for whom the streets are.

The project was first initiated by artist and writer Chan Sai-lok to Yang Yeung. Chan was concerned that habitual approaches in which visual artists and poets collaborated were limiting to the potential for visual art and literature to cross-pollinate. He observed that a poet might have composed a poem and a visual artist would be invited to respond to the completed work. The result of the ‘collaboration’ is often in print publication. Chan believed more could be explored between the art forms if the artists began working together in the early stage of the creative process and if physical space were also involved as an artistic condition. Chan suggested to Yeung about the possibility of using A3 as an experimental space. In this light, the project came about from the artists’ need to refresh established art forms and find new possibilities for them. When Chan and some members of the Fannou Poetry Society first visited the place, they found it inspiring in that way the ‘shop’ seemed to be left out of the consumption spaces around it (eg. Times Square as a major shopping mall in the area), and yet, in its aloneness, it carried a potential for transformation. One poet recalled the days he lived in a sub-divided flat, which opened into a back alley like the one A3 was in. The dim physical space in contrast with its surrounding brightness (light from vehicular traffic and neon signs) and the hustle of consumption activities became the source of inspiration for the first poems. It was evident that the site was recognized as appropriate for the artists’ preferred experimentation.

In terms of funding support, the artists offered to support themselves collectively in the production while Yeung agreed to their using the space at no cost for as long as they wish. As in other projects, Yeung would also work on social media publicity with the help of an assistant and offer a piece of writing as an interpretation and review of the project. In addition, as in other projects, since A3 is situated one block away from Art and Culture Outreach – a project space and bookshop in a privately subsidized ‘vertical’ art village, Chan and the Fannou Poetry Society were able to rely on using ACO’s materials for production, like wheeled cart, ladder, etc. In Hong Kong, such relations are known as ‘street mates’. Note that the composite term gaai1 fong1 means street and lane, but in colloquial Cantonese, the term could be used not to refer to places but to persons living close to each other, at a street- or lane- distance. It is a specific idea of neighborhood.) The collaboration is by mutual agreement. No formal scheme for funding or other aspects of production was set up. 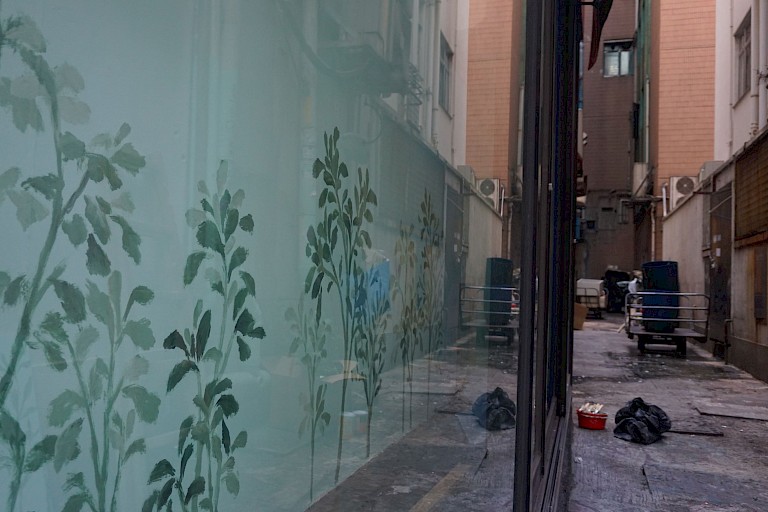 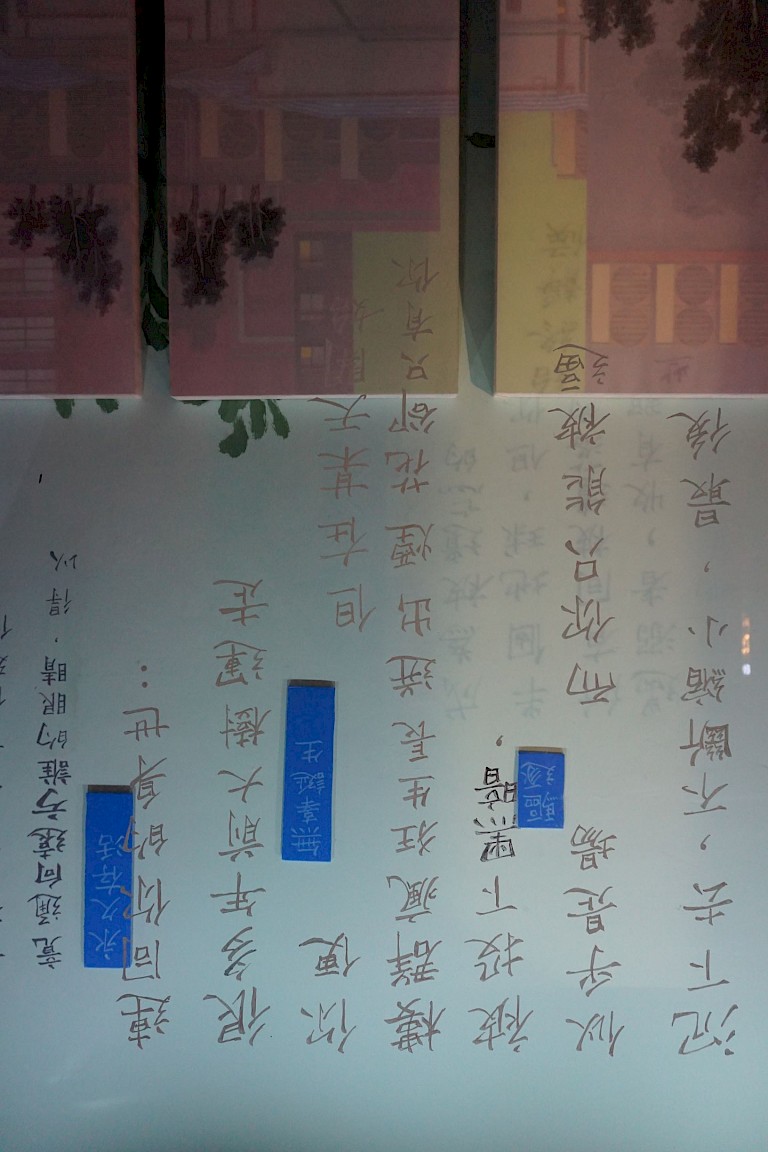 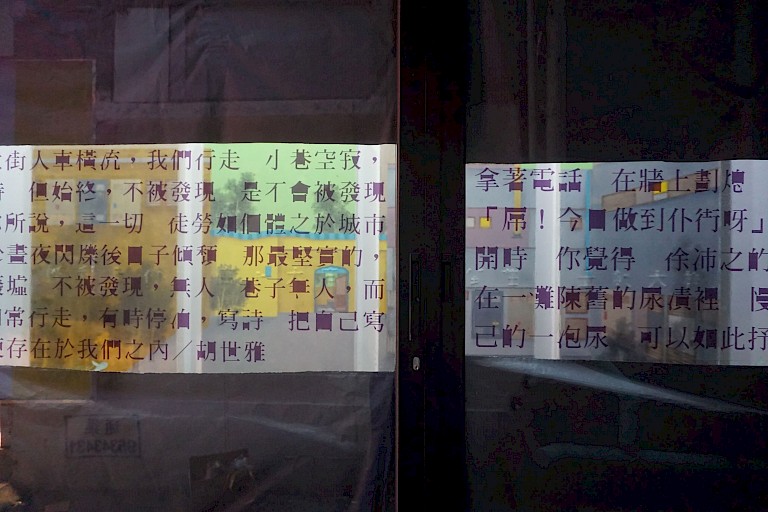 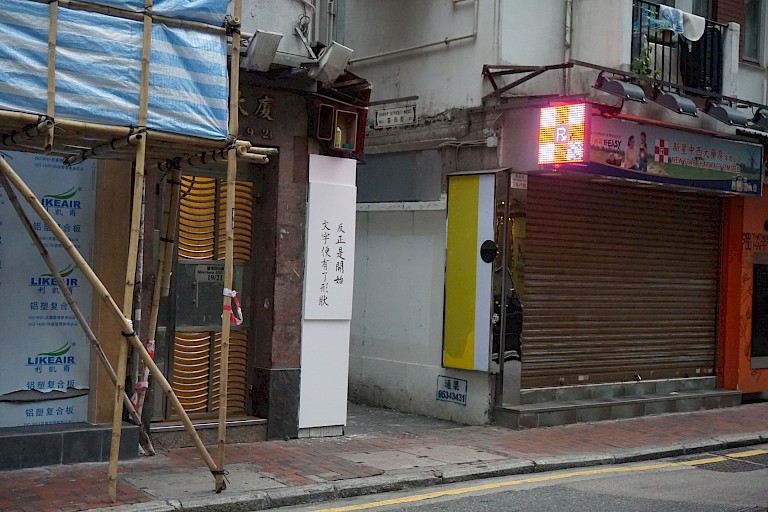