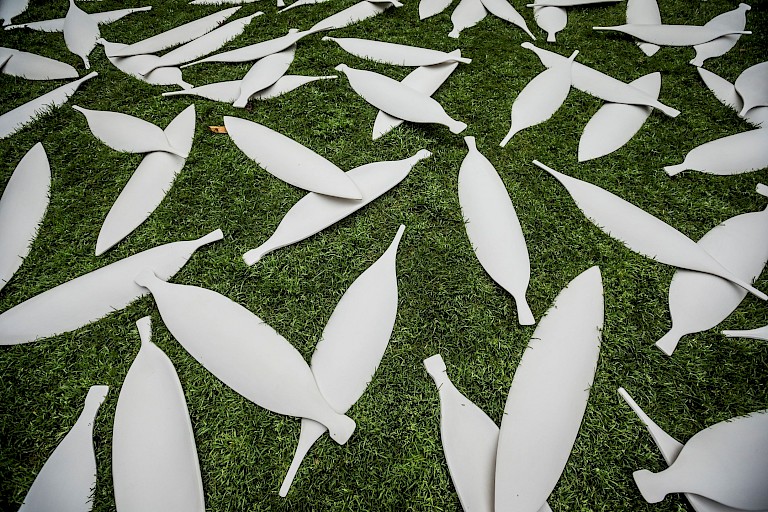 barrangal dyara (skin and bones) (2016) was a vast sculptural installation stretching across 20,000 square-metres of the Royal Botanic Garden in Sydney, Australia. The installation recreated the footprint of the 19th century Garden Palace building before it burnt to the ground in 1882. Built to house the 1879 Sydney International Exhibition, the Garden Palace then became home to government departments and stored countless and irreplaceable Aboriginal treasures and ancestral remains. barrangal dyara (skin and bones) was artist Jonathan Jones’ response to the wealth of Aboriginal cultural material lost by fire and also more broadly in Australian culture. The art work represents an effort to commence a healing process and a celebration of the survival of the world’s oldest living culture, despite this traumatic loss of cultural heritage.

Although virtually obliterated from the mainstream Australian conscious and burnt to the ground more than 130 years before, the Garden Palace is as a recurring symbol for the project — a symbol of lost culture and also of historical attitudes and discrimination. A symbol of both nation-building and internationalism, the Garden Palace had an Australian Court and an Ethnological Court. The first displayed raw materials and objects representing the colony’s ‘progress’. The Ethnological Court — a display of ceremonial shields, spears, artefacts, and indigenous ancestral remains collected in the colony — promoted ideas of savagery, Social Darwinism, and encouraged the assertion of terra nullius_a concept that shaped the colony of Australia and its treatment of indigenous people.[1] The comparison between the two Courts was clear was clear, ‘progress’ against ‘primitive’.

barrangal dyara (skin and bones) is a multi dimensional work engaging its audience on many levels. The project is physically made up of three elements: white shields marking the destroyed building’s perimeter, a meadow of kangaroo grass, and eight soundscapes in Aboriginal languages. Each element can be said to speak to a core concern of the overall art work — the shields representing ‘loss’, the kangaroo grass representing ‘regeneration’, the soundscapes representing ‘reclamation’.

Shields: Against the green of the Royal Botanical Garden, some 15,000 custom-made white gypsum shields retraced the outline of the destroyed Garden Palace and echoed the masses of rubble left after the fire. Not only the ‘bones’ of the destroyed building, the chalky objects stood in for the loss experienced at this site. Speaking of the shields and other cultural artefacts destroyed including those of the Wiradjuri and Kamilaroi nations, ancestors of the artist, Jones has commented “Countless Aboriginal cultural objects housed in the Garden Palace will never be seen again; objects our ancestors made and used, objects that our communities could have built upon.” Not only were objects lost, but also human remains held in the building. The problematic colonial museological practice of displaying the remains of indigenous peoples is directly referred to in the works title — the fire left not only rubble on the ground but literally the skin and bones of Aboriginal peoples. Based on four typical designs from Aboriginal nations of the Australian south-east, the shields evoke the thousands of shields (many ceremonial) that would have had cultural presence in this landscape over generations. However, the shields in barrangal dyara (skin and bones) are void of unique markings or personal designs, speaking to the erasure of cultural complexities through practices of institutional collection and removal from cultural use.

Kangaroo grass: The year barrangal dyara (skin and bones) was created (2016) was 200th anniversary of Sydney’s Royal Botanic Garden, an institution that displays an ongoing connection to and care for land, but through a colonial lens. In 1938 to mark 150 years of European settlement, the location of the Garden Palace’s destroyed dome was reworked into a carefully manicured English-style Memorial Garden. Created to honour “the pioneers who had transformed this vast land into a prosperous country” the garden ignored the indigenous communities who had inhabited, cultivated, and cared for this land across far longer than 150 years. Jones chose precisely this site to become the conceptual and physical heart of the project. barrangal dyara (skin and bones) saw the same site burst with an abundance of native Kangaroo Grass (Themeda triandra), reclaiming a proud Indigenous agricultural tradition and speaking of an unbroken connection to ‘country’ across thousands of years.

The term ‘country’ is critical to the art work and has a rich and specific meaning in Aboriginal culture. The notion of country does not simply mean land but includes all living things. Country embraces the seasons, stories, and creation spirits; it is a place of heritage, belonging, spirituality, and way of believing. “Embedded within the landscape are our ancestors, our past, and, like the Garden Palace, their skin and bones make up country” the artist tells. Country can be understood as a living environment that sustains, and is sustained by, people and culture. Before colonisation, the reciprocal relationship between people and the land underpinned all aspects of life. Today, this relationship remains fundamental to the identity and way of life of many Indigenous people yet is overlooked or forgotten in both law and popular belief. The artist’s decision to plant a native grassland evoked complex and often buried histories of Aboriginal agricultural traditions. While a persisting belief is that Aboriginal peoples were simple hunter-gatherers, recent research has unearthed strong evidence of farming and skilled land management. The artist reflects “Plants tell histories. Most plants at the Botanic Gardens are introduced species, we wanted to challenge that site, challenge that history.” Native grasses, long forgotten in Australia’s history, have been cultivated and sustained life for thousands of generations. Grindstones used to turn seeds, including those of kangaroo grass (or native millet), into flour have been discovered in northern New South Wales and dated to 36,000-years-old. Today, Aboriginal Australians are considered the first bread-making people, well ahead of other early civilisations, and kangaroo grass is considered the first cultivated grain.

Soundscapes:To share the story of the site the artist drew on language. The project is named in the local Sydney Gadigal language and brought together people from eight language groups.[2] The soundscapes presented reinstate contemporary Aboriginal voices into the landscape and recall both the lost objects and the material that was largely excluded from the ethnological collection—objects relating to women, children, agriculture— and to broader cultural practices that challenge the imperial vision of terra nullius. The relationship between language and empire is long established, the stripping of language is part of the stripping of culture. As in many colonised countries, indigenous Australians were punished for speaking their languages in public. Voiced by a new generation, this aspect of the art work reclaims language, history, and access, allowing the work to transform a space of grief into a celebration of the strength and uniqueness of south-east Australian Aboriginal cultures.

Binding the historical and the contemporary, the simultaneously ancient and modern, barrangal dyara (skin and bones) gives voice to a narrative of site, lost cultural heritage, discrimination, the repercussions of forgetting, and ultimately hope. As artist Jonathan Jones comments “In this way Aboriginal communities and their survival offer hope to other displaced people of the world.” Perhaps the greatest strength of barrangal dyara (skin and bones) is that it allows us to look at contemporary art and history in a more complex way, instead of reducing it to a Western model, and to confront how we see with a new set of imperatives. “I’ve begun to question what else we can forget as a community, if something so grand and visible and spoken about [the Garden Palace] has disappeared from our vision” Jones has stated. “…the Garden Palace becomes a fault line in the nation’s memory, which has enabled the project

[1] From the time of Captain Cook's arrival in 1770, the British Government acted as if Australia were uninhabited, claiming possession of the East Coast of Australia for Britain under the doctrine of 'terra nullius’, despite Indigenous people occupying the land for at least 60,000 years. In 1992 the High Court of Australia ruled that the treatment of Indigenous property rights based on the principle of terra nullius was wrong and racist. 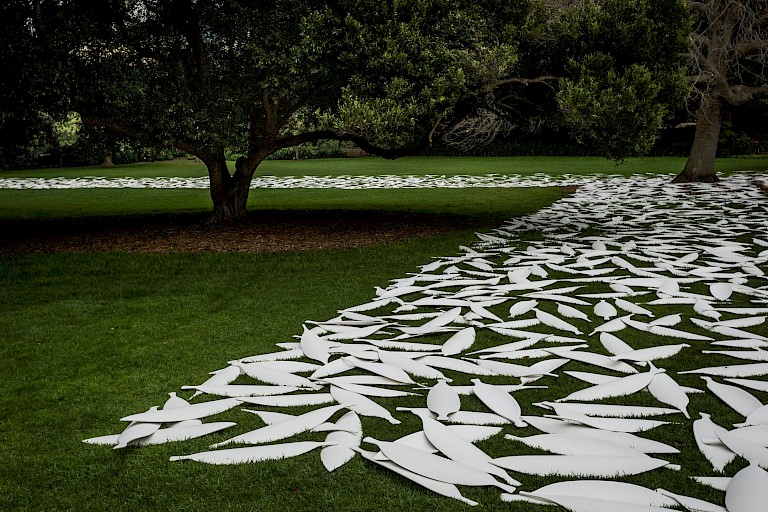 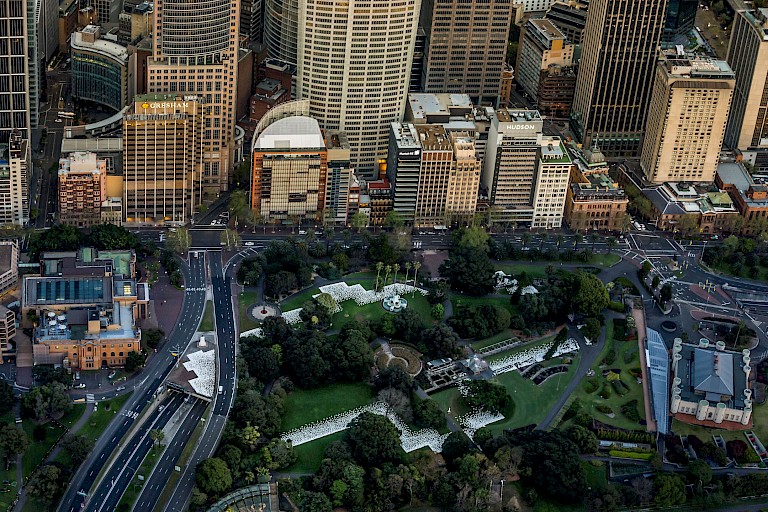 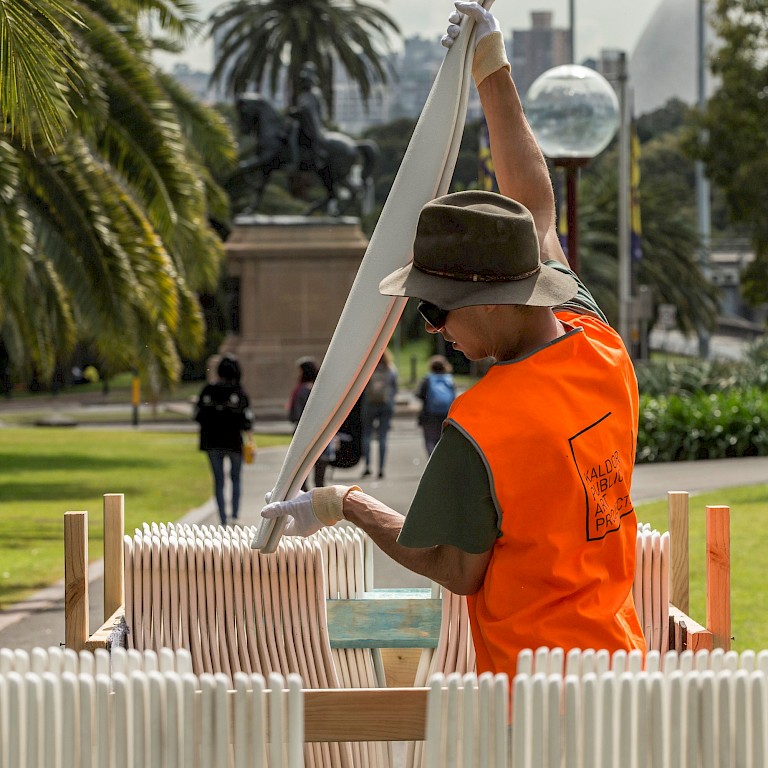 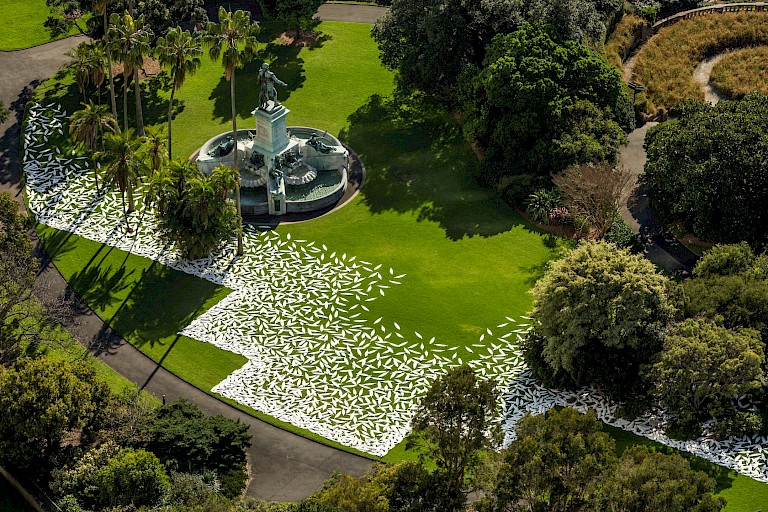 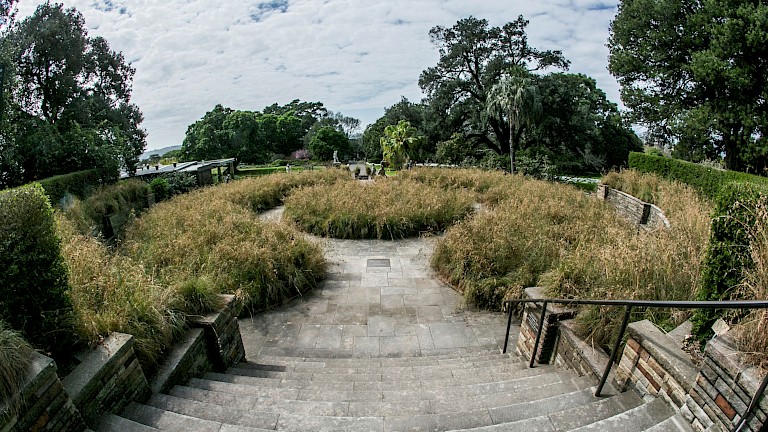 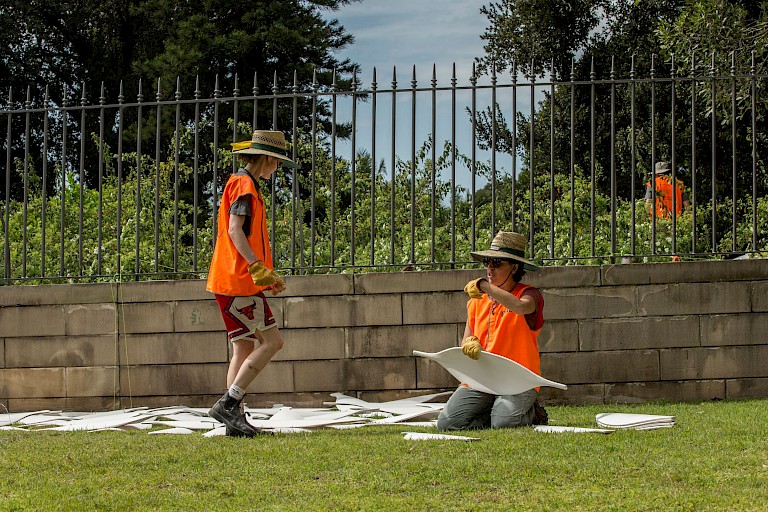 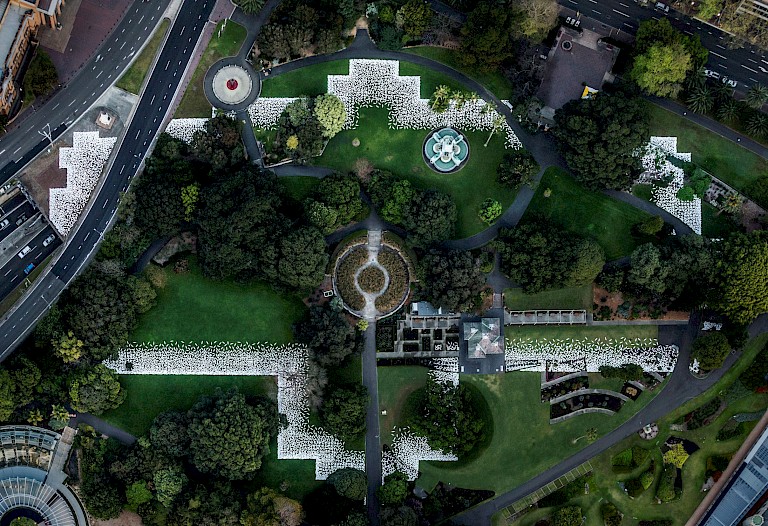