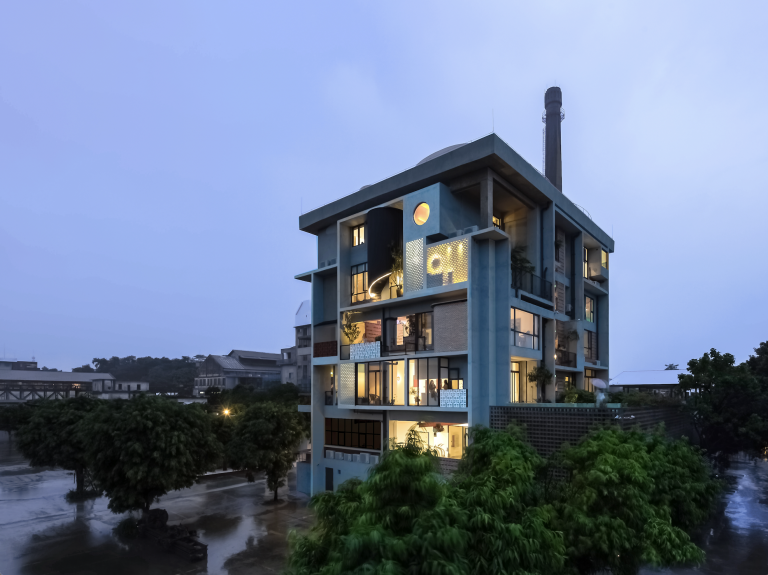 The predecessor of the Borderless Community of Zi Ni Twelve Portals is a fiberboard workshop, which is located in a large state-owned industrial zone in Guangdong in the 1950s. With slash youth as the main space users, the project intends to break the definitions of space function and boundary: the streets between houses could be turned into markets on weekends; the living room might serve as both studio and art salon; the bath can also be transformed into a reading corner, a discussion area or even a children's ball pool … The exterior wall that defines the boundary of the space is composed of different grey spaces, which showcase the colorful life inside, endowing the facade with expression and coziness. The unique experience of such space evokes collective memory of the harmonious neighborhood relations in the good old days, and provides inspiring life experiences for new communities born under the current sharing economy–thus various kinds of activities can be initiated to endow the space with different definitions and more possibilities will be explored. By strengthening human-nature and interpersonal relationships, architecture becomes an exposition of life and an accelerator of creativity.

The project is tailor made for 7 "slash youths" in the internet era as a mingled space for both public and private life covering work, habitation, news conference, exhibition, business and social gathering. The "slash youths" are engaged in various industries and their work demands high social exposure. Therefore they would like to exhibit their works, products and even their operation model and everyday life so as to usher in a brand new urban lifestyle distinguished from the commuter's routine followed by most of their peers.

Almost every unit is equipped with various complex or mingled function space. Thanks to the innate characteristics of decentralization of “slash youths”, the hierarchy and traditional definition of space need to be broken. As a result, the sitting room can be both studio and display room; the bathtub could serve as a study for reading and resting, or a sand pool for kids to play. Furthermore, there are not only shared front gardens and even backyards for every two units, but also a number of open space areas designated along the ambiguous border between public and private. Therefore, the residents would be able to see how their neighbors create their art pieces or make their handicraft works through the French window or long horizontal window; they could also wave to and chat with their neighbors upstairs or downstairs through the windows or on the balconies of their homes. The open space rooftop offers another venue for big gatherings among more family members or visitors. Such reiterative reinforcement of social connection makes the whole building a vertical borderless community; while the reappearances of such borderless feel of space and field not only realizes compound use of space and creates flexible border for mutual infiltration between private and public space, but also further illustrates the potential differentiation of the vocational identities of “slash youths”.

In the context of the whole Zi Ni Tang Park, the renovated building is more like the public parlor of a large community. In this vertical space, design is not only an attempt to integrate private daily life and public activities that makes it a space container with cohesive power, but also to combine the rich introvert activities of the building with the outside street space in the park. Such approach to space featuring inward connection and outward exhibition, on the one hand, displays the work and life of the “slash youths”; while on the other hand, incorporates the industrial heritage site and natural scene, with each other as its backdrop, to make it an integral whole for exhibition. 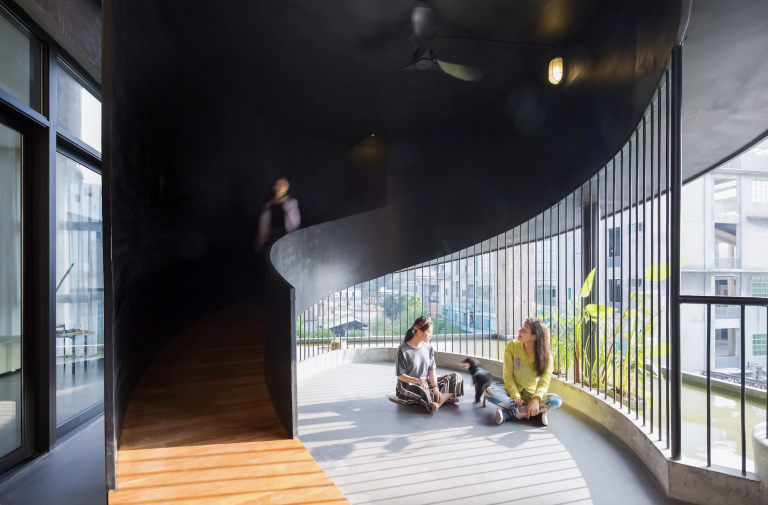 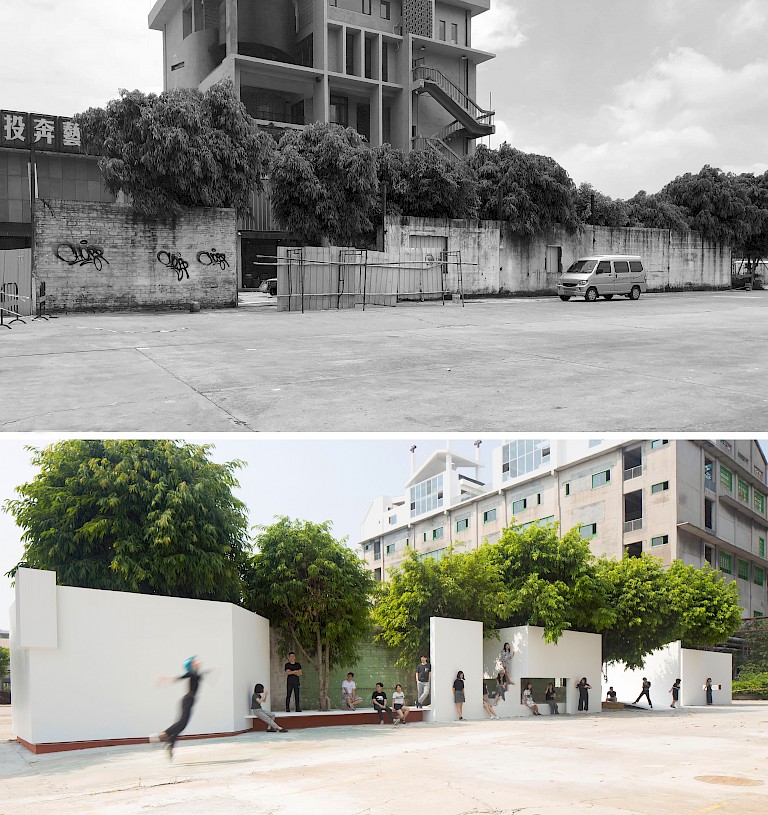 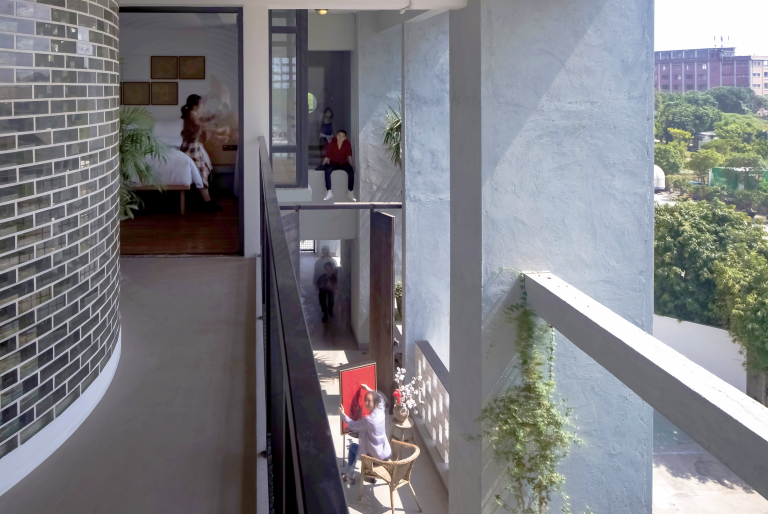 At that time, a few renovation projects just started up from ruins in the Zi Ni Park, making the park an experimental field for a group of artists and architects. This wasteland full of space for imagination let me see the possibilities. The architect found a potential property owner, a founder of co-working business, and persuaded her to rent a 200 sqm electromechanical equipment room in the park and turn it into an Airbnb property for family tour during weekends, or let it for party/show, or even make it a suburban version for co-working and short-term accommodation. However, our first edition of perfect Borderless Community merely stayed on the drawing board owing to her quit from the start-up company. But the seed had been planted and I tried to find another space for it to grow into a tree. This fiberboard factory became my next target exactly because it had no landscape, no features, and thus low rent. Therefore, I discussed with a few very close friends in design and art circles about building a Utopia, where work, life and exhibition could be merged. They belong to a new class spawned in the Internet Era – "slash youth". Through Internet, they can freely give play to their expertise and participate in the complex and broad social and economic operations as independent individuals.

In 2019, after three years of twists and turns, the factory of 1000 sqm finally became an "Immortal's Cave" carrying various dreams about home for the group of friends — once there was a hill, and there were six immortals living in the hill...The facade of the house is not designed, but generated by the space needs of each individual, where a community life featuring pluralistic symbiosis is plainly presented. We had originally thought it was only a way of life for the minority of pioneer groups, but after it had been filmed by Yitiao and become the most searched hashtag on its website, we were surprised to find that actually immortals do live in the hearts of tens of thousands of people.

Since the Covid-19 pandemic broke out in January 2020, a "borderless" lifestyle of working, raising/educating kids and socializing at home has become the daily routine for most people. How will we live together in the post-pandemic era with "quarantine" as the keyword?

Industrial civilization hastened the birth of Bauhaus and brought out modernism, which has been leading the design circle for a century. Everything started from the change in living space. The Internet already has a profound influence on our daily life, but our house seems to remain in the industrial age. Can a "machine for living" be turned into a "symbiotic community"? The spirit of Internet is for people to build and share together. A hundred years ago, Bauhaus claimed to "design for the general public"; today we hope to "design with the general public", so that more people can realize their personal needs and at the same time, connect with each other through sharing in the real world. This is the construction from "I" to "we".

The architect launched an online and offline game research for the design workshop namely, "6 friends are calling you to share a house". The data received from thousands of participants show that changes in lifestyle do require response from residential space.

In November 2020, the Borderless Community of Zi Ni Twelve Gates won two international awards, i.e., WAN (World Architecture News) 2020 Gold Award (Mixed-Use) and Dezeen Award 2020 (Housing Project). The Judges comment that "Apartment buildings can be seen as isolated spaces but this helps us go back - to a neighborhood feeling, where there are moments of interconnection."

It's been almost 15 years since we did residential design last time, while this time the awards encourage us to further explore the continuous improvement of living space and living environment in various forms.

In 2021, it is expected that the Borderless Community will become the ideal home for more people.

In his book Transparency, Colin Rowe wrote that with "its extensive transparent areas", the Bauhaus dormitory realized the kind of "transparency of overlapping planes" in analytical cubism; while by contrast, Le Corhusier's villa at Garches is primarily occupied with the planar qualities and a transparency is effected not through the agency of a window but rather through the primary concepts which "interpenetrate without optical destruction of each other." We may say that Colin didn't "design" the facade but through graphic design, the facade is constructed (or generated) by space directly.

Similarly, in the Zi Ni Twelve Gates project, we didn't "design" the facade but let it be generated by the courtyards and backyards of the 6 houses jointly with the "illegal structure". It could be compared to a garden whose fences have been removed, thus mountain and rocks could be seen through the pavilions, terraces and towers that are placed in a way "without optical destruction of each other". Dong Yugan wrote in his essay Appreciating Rockwork as Mountain that "In Guo Xi's mountain and water works, the scenic spots and resorts in mountains are often named after pavilions, terraces and towers; while in this painting by Li Gonglin, there are lots of caves and maintain terraces that become classical combination for maintain dwelling thanks to their remarkable resemblance to pavilions, terraces and towers." We are attempting to interpret the transparency described by Colin into Li Gonglin's Mountain Villa - a peep into the courtyards and sitting rooms of the mountain villas would lure one to explore further. The fragmented facade surely doesn't need to be unified in terms of material and color in the name of minimalism.

The entire Zi Ni Tang Park was undergoing constant construction and development from 1950's to 1990's and has thus become a museum of building materials. We just picked one piece from its history and used 13 kinds of material to build 6 houses in order to simulate the free state of a private property. The unique facade consisted of a pile of seemingly "unlicensed constructions" constitute shortcuts for the neighbors and their pets to drop around, so the people here would be as happy as those lingering around in pavilions and caves among mountains in ancient paintings.

We attempt to blur the boundaries between the interior and the exterior, and to bring Nature into architecture in an either abstract or concrete way. Adopting an approach of "broadening the border" to turn the surface, on which the space depends, into space perse, the definitions of both interior and exterior become ambiguous.