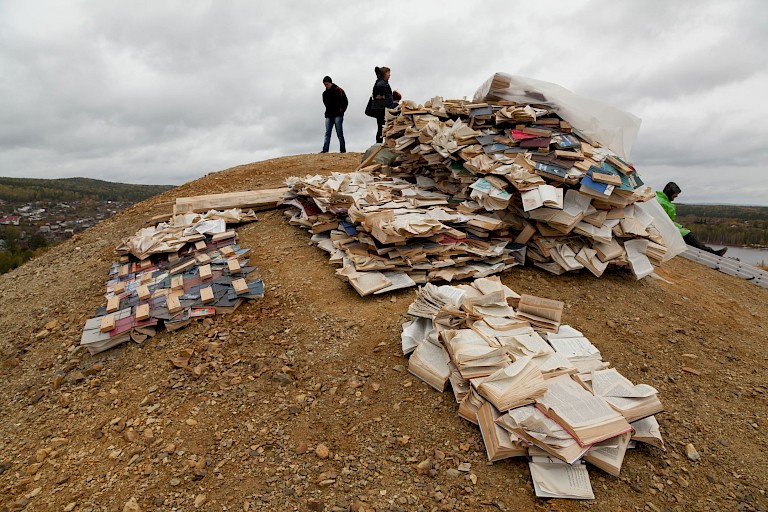 «Camus» was a project developed by Tima (Timofey) Radya during his residency at the 2nd Ural Industrial Biennial of Contemporary Art, which took place in Yekaterinburg as well as in smaller industrial towns of the region. In the outskirts of one of them, namely Degtyarsk, the artist found an abandoned slag heap, which he decided to turn into a plinth for his artwork. Tima Radya created a wooden frame in the form of a sphere with a diameter of 4 meters, sheathed with 2 000 books decommissioned from local libraries. With the help of a group of friends, the artist was working on the construction for about ten days. After that, as intended, the ball of books rolled downhill. The work was dedicated to the French philosopher and writer Albert Camus and his story of Sisyphus that offers a liberating interpretation to the seeming absurdity of human life. Sisyphus, who was condemned to repeat forever the same meaningless task of pushing a boulder up a mountain only to see it roll down again, becomes a symbol of eternal struggle for understanding the universal causes that grants a new sense to futile efforts. In his written statement that accompanied the work, the artist, quoting several passages from Camus, asserted «the quiet joy of Sisyphus», who «owned his fate».

Taking into account the social context of Tima Radya’s work, it is important to note that for Albert Camus the figure of Sisyphus also stood for the working class: «The workman of today works every day in his life at the same tasks, and this fate is no less absurd. But it is tragic only at the rare moments when it becomes conscious. Sisyphus, proletarian of the gods, powerless and rebellious, knows the whole extent of his wretched condition: it is what he thinks of during his descent. The lucidity that was to constitute his torture at the same time crowns his victory.» (http://second.uralbiennale.ru/catalog/item/233/degtjarsk) Albert Camus. The Myth Of Sisyphus And Other Essays. Translated from the French by Justin O’Brien. 1955. (https://postarchive.files.wordpress.com/2015/03/myth-of-sisyphus-and-other-essays-the-albert-camus.pdf)

Yekaterinburg, the main site of the Ural Industrial Biennial, is the fourth most populous city in Russia, and ranks third economically. It is located east of the Ural Mountains, in the middle of the Eurasian continent. Founded in 1723 as an ironmaking plant, it was named after Yekaterina, the wife of the emperor Peter the Great, who later became the empress Catherine I. The city soon turned into the mining capital of the Russian Empire, and an important gateway between Europe and Asia. The main road of the Empire, the Siberian Route, was built to run through the city. Just as Saint Petersburg was dubbed «the window to Europe», Yekaterinburg was known as «the window to Asia». During the Soviet era the city was named Sverdlovsk, after one of the Bolshevik leaders, — the historical name was restored in 1991. Degtyarsk, located 34 km to the southwest of Yekaterinburg, emerged in the end of the 19th century, as a settlement for workers engaged in the provision of birch coal for the needs of the plant located nearby, as well as the production of tar from birth substrates (therefore the name of the town, from «degot’», that is, «tar» in Russian).

Officially, the town was founded in 1914, when the production of pyrites began in the area. With the population of 16 thousand people (as of 2017), Degtyarsk had some peculiar moments in its history. In 1959, the 36th American vice president and future 37th president Richard Nixon visited the town: in 1925-1930, his parents worked at a local copper mine, which was run as a concession by the American firm Lena Goldfields that had operations in Russia. On May 1, 1960, the Soviet Air Defense Forces famously intercepted an American spy plane right above Degtyarsk. Coming originally from Yekaterinburg, Tima Radya had a keen knowledge of life in the rundown industrial areas of Sverdlovsk region. By marking an abandoned industrial site, a landfill, as a temporary public space, the artwork offered a poetic way to read urban socio-economic conditions and environments in their relation to the everyday life in provincial Russia. When public space is twisted, tattered, and uninhabitable, one may just as well make initially uninhabitable spaces a site for interaction, inviting the process of an overall rebirth and renewal.

According to the artist, one of the intended messages of «Camus» was to promote reading as a tool for the transformation of self and the world. This idea curiously correlates with the merger of used books and wasteland, while art became a way to recycle these, at least for a temporary project. Ultimately, there is no such thing as used information or used space — it necessarily transforms into something else. Looking at the project, it is important to remember that Tima Radya is first and foremost a street artist, who often uses urban sites for very subtle and minimalist messages that nevertheless bear a strong political stance. His laconic inscriptions infiltrate the cityscape, at times imitating the fonts used in advertising or the style of billboards. Recently he has been working with neon letterings, installing them both in the urban environment and in places less public, like a spatial astrophysics observatory. «Camus» was not a typical work for the artist who rarely produces objects — however, it reflected his style and his manner to work with metaphors.

The project in Degtyarsk might also be read as a comment on urban ecology, as well as on the nature of political struggle in present-day Russia. The 2nd Ural Industrial Biennale of Contemporary Art analyzed the ability of art to master and transform the surrounding world. Curated by Iara Bubnova, Dmitry Ozerkov, Valentin Dyakonov, and Viacheslav Samodurov, it focused on exploring the possibilities of going beyond the opposition of production and consumption in the artistic, cultural and social spheres, and explored the possibility of contemporary art to «appropriate» and transform various non-exhibitional spaces and create new communities of participants that could enter into complex interactions with traditional social groups. «Camus» was a humble and poetic work — in spite of its complex construction process, it was an ephemeral and short-lived installation. In fact, the artist had planned for the sphere to stay on top of the hill for a while, but, just as the myth of Sisyphus would suggest, it rolled down soon after it being installed. Nevertheless, its fragility was precisely what made it such a strong statement in the context of industrial small-town Russia. The work carries profound sociopolitical connotations, triggering reflections on labour, environment, and recycling of knowledge. 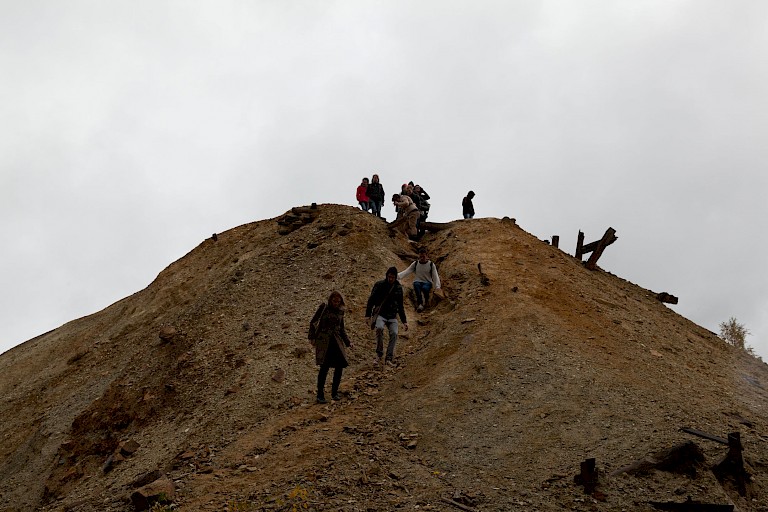 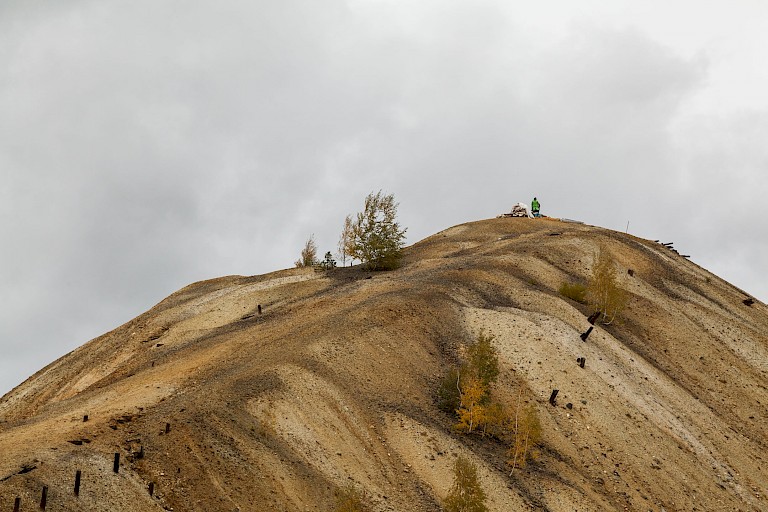 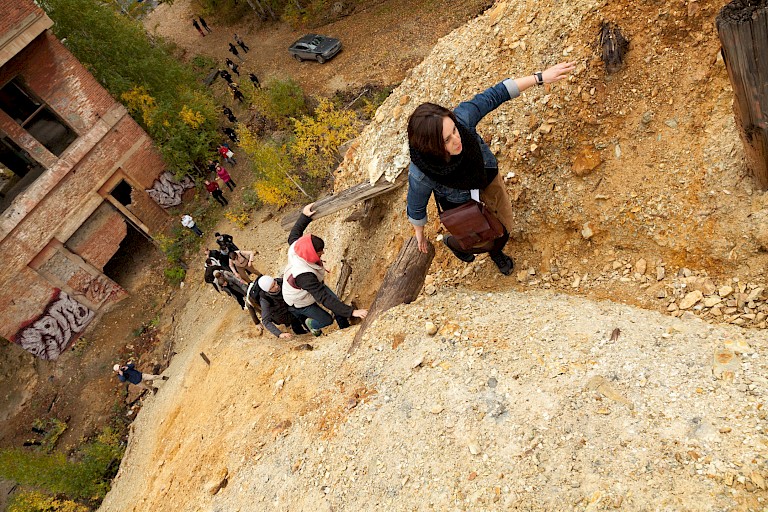 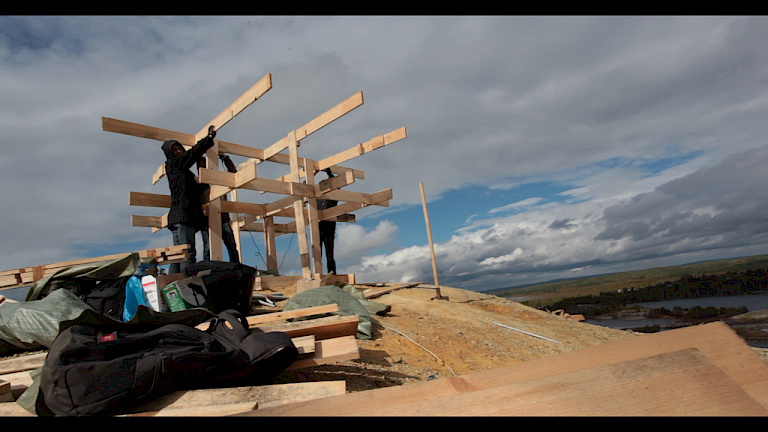 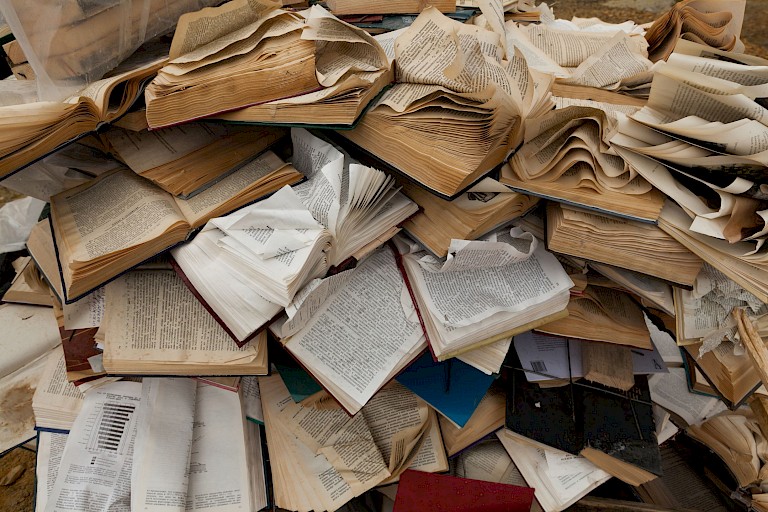 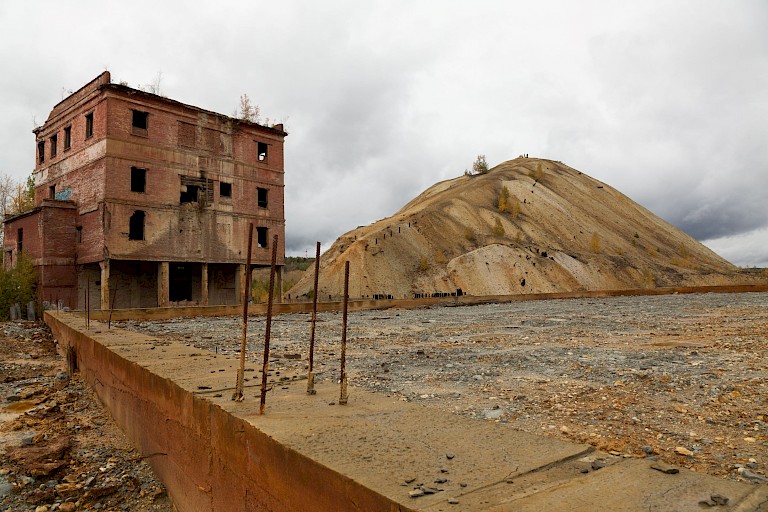 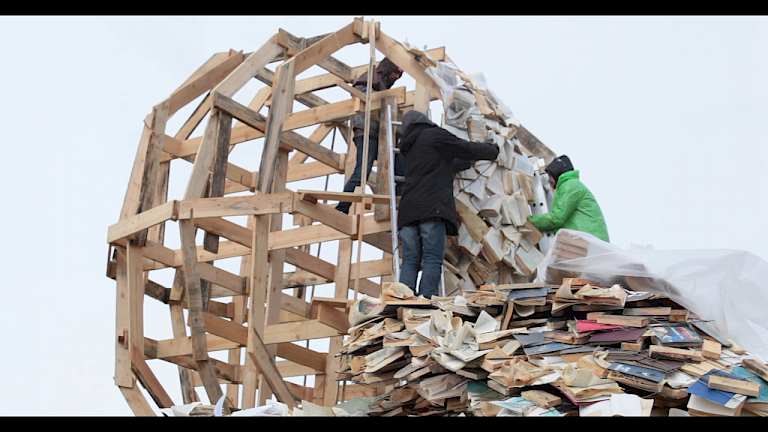