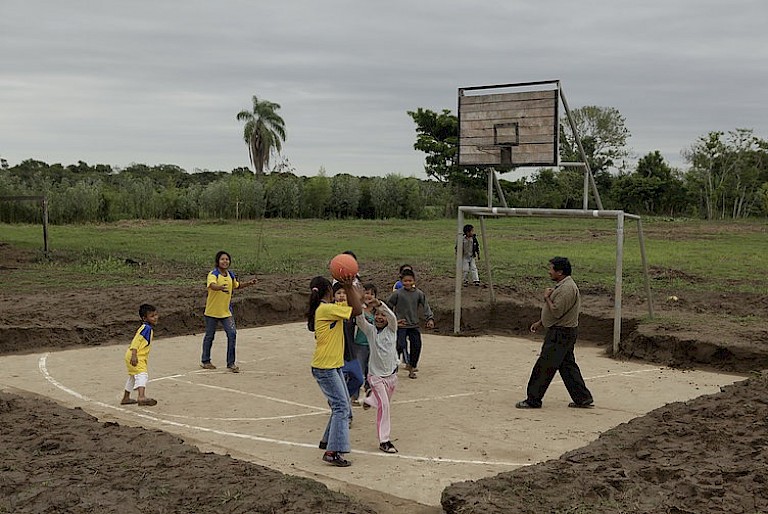 The project “cancha abierta” (open court) developed by Jesus “bubu” Negron is a direct response to the natural disaster emergency that happened several months before his visit to Bolivia. One of the communities affected by the flooding was the community of El Rosario, located approximately 500 meters away from the Mamore River in the region of Beni, in the Bolivian Amazon. One of the most distressed areas was the basketball court, which was buried underneath three feet of mud. Considering this context, the artist organized an "archeological" excavation to dig out half of the court. After working for four days with the help of the community and other invited artists, they were able to remove most of the accumulated sludge. In this process people from the community and other resident artists participated and were the first ones to play. 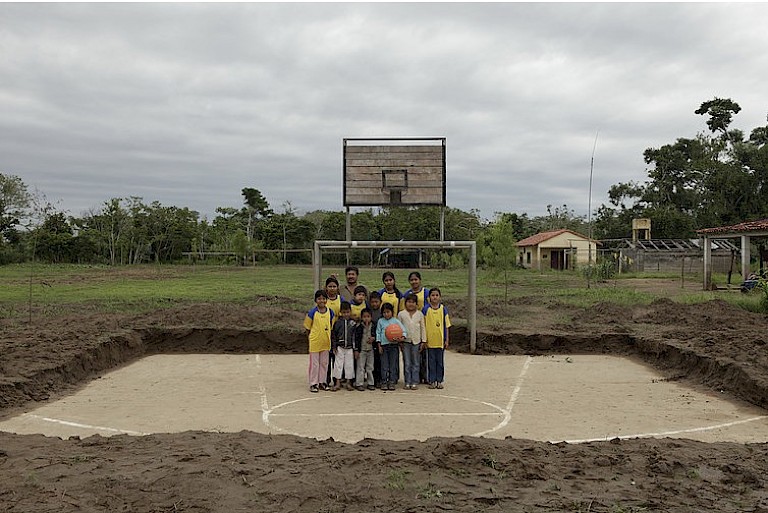 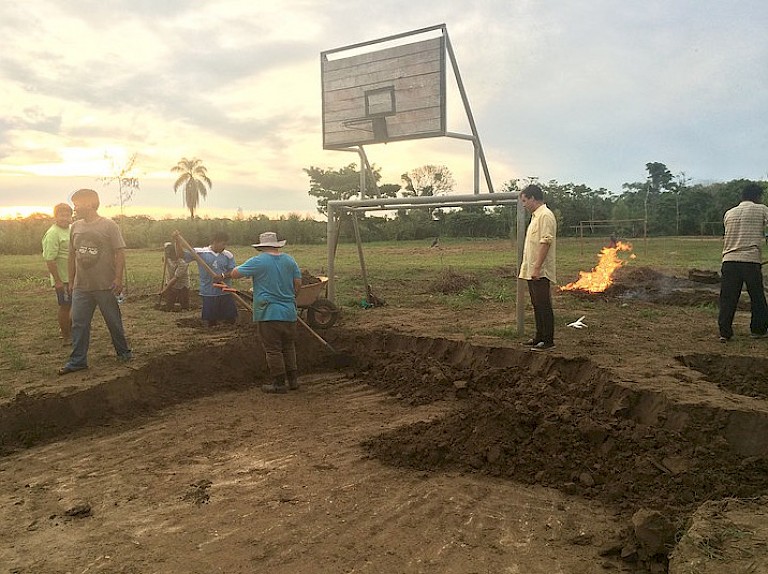 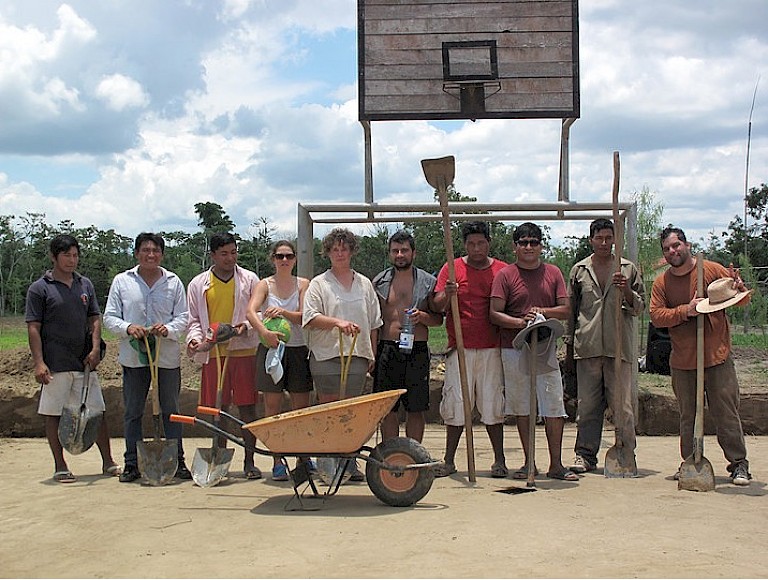 In November 2014, 26 artists, curators and filmmakers from countries such as Argentina, Brazil, Bolivia, Chile, Colombia, United States, Mexico, Peru, Puerto Rico and Venezuela, carried out a program of activities that included the study of the silvan environment of the Mamoré River (which in the local language means mother of all rivers) and established contact with the Mojeño community of El Rosario in the Bolivian Amazon on board a boat called 'Reina del Enin' (Queen of the Enin) in which they would live for a total of 17 days. A cultural exchange, dialogue, and knowledge exchange within the residency, was part of the process for the project that was organized by Kiosko Galeria, (based in Santa Cruz de la Sierra, Bolivia), a "not so much of a gallery, but a space for the production of contemporary artistic events.

Artist Raquel Schwartz is the director of Kiosko Galeria. She led this particular format of residency and workshop called Abubuya, with the purpose of creating a space for creation and exchange. Among the artists and with the community of El Rosario, located about 500 meters from the Mamoré River, this experiment resulted in a series of actions, interventions, photographs, videos and other pieces that would become an exhibition called Km0 Abubuya in a municipality near El Rosario.

Among the invited artists was Jesús "bubu" Negrón, who presented an initial idea or as he calls it a "generic" idea, a drawing project, that included several drawings of plants. When the artist established contact with the community, this plan stopped making sense to him. The artist put on the same page his ethical questions and his aesthetic questions about what art and the art world mean and the place where he himself comes from. All this in relation to that community and the geography he was stepping into. He wondered about what was really left for the locals with this exchange. Jesus began to dig into casual conversations about what was "important" to that community, and he heard one story constantly: The tale of a major flood that affected the vicinity the previous year -the largest recorded to date- with which the location had been practically buried under the mud. One of the most distressed areas was the basketball court, which was buried underneath three feet of mud.

Taking into consideration the site context, Jesús 'Bubu' Negrón organized an "archeological" excavation to dig out half of the court. After working for four days -with the help of the community and other artists from the 'Abubuya' workshop- they were able to remove some of the accumulated sludge, opening half of the field. When the project was finished, the community organized the first basketball game; and through that simple act, the court was restored. This action devised by Jesús was called Cancha Abierta (Open Court). According to the artist, at first, he started without the community support. He marked the perimeter of his excavation, took a shovel and a car, and began to dig. As Jesus progressed, the community of El Rosario and his fellow artists were motivated, joining him to dig out the mud. In a few days. they were able to reveal enough of the basketball court. It was a celebration, but also a moment of learning about self-management for the community.

Curatorship, as a form of management that summons multiple artists of diverse backgrounds, brings with it not only the challenge of promoting the creation of artworks/new processes, but the challenge of understanding that, when you arrive to a place of cultural exchange, in this instance the boat were the artists lived together for 12 days and the El Rosario community with about 100 inhabitants of indigenous origin, the initial proposal, whatever it might have been, will inevitably change, subtly or radically. In this case the residency process of Jesus ‘Bubu’ Negron transforms from an initial idea more centered in the observation to a project that answers to the conditions of a place where a research process is developed.

Cancha Abierta is a project that uses art as a facilitator agent of an action, not as an objective in itself. This action takes place on the activation of a collective or community ephemeral process with the objective of recovering the basketball field that has been blocked by the rising of the river. When the artist uses the archaeological excavation as a metaphor the process of digging up the field in a solitary action it provokes the other artists of the residency and the other members of the community to respond and to join efforts. The recovery of the field after many months of inactivity signifies the reactivation of a ludic public space for a community that is constantly beaten by the inclementness of life in this part of the world.

If it is seen through the prism of globalized art, this project works as a poetic political action that activated different individual agencies and articulated them in a collective process that affected life in the community, by intervening one of its public urban architecture, tightening the community intelligence and sensibility. If read this way the residency succeeded steadily in its objective of being culture in exchange under limited time margins. But from another perspective, it is interesting to think about the reason why this community had not rehabilitated the field in relation with two aspects that the project doesn't go deep in: First the ludic specific dimension of this community and its characteristics. Second the logic of andean cultures in relation to decision making and its communitarian actions. With all that, it is worth stressing that this is a piece that implies contact with realities and ways of understanding reality that are different and that, under the circumstances of the residency, a temporal encounter and synergy were achieved; and are this characteristics the ones that makes it a big challenge to circulate the artwork without falling into the rhetoric of the art as social work.