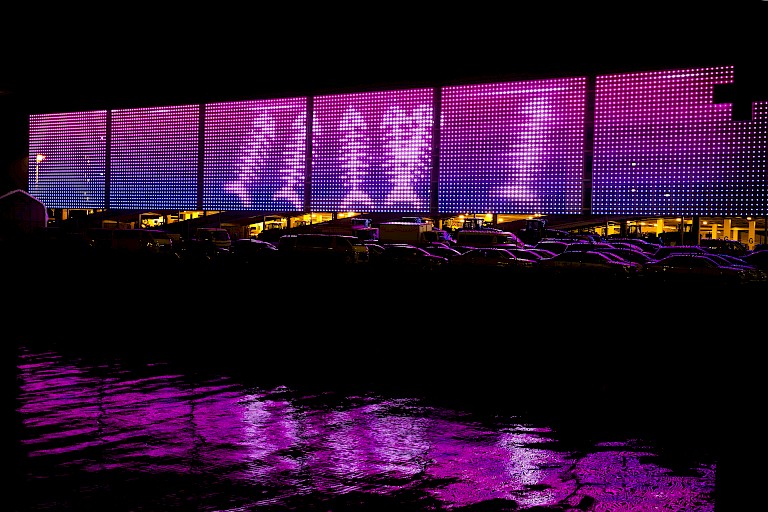 Come Up For Air

The Lightship is a new site for contemporary art, which was launched by the Ports of Auckland in October 2020. The large-scale digital light wall on Quay Street provides Tāmaki Makaurau Auckland with a unique place for public art to be enjoyed.

The Lightship is a 110-metre-long, 13-metre-high light wall that wraps around the western façade of the port’s new car handling building. It is made up of seven panels with nearly 8,500 individually programmable LED lights and is visible from busy Quay Street, city wharves, local buildings and the water.

It also sits near another significant public artwork, ‘The Lighthouse’ by Michael Parekowhai on Queens Wharf, cementing the area as a destination for contemporary public art.

Sorawit Songsataya’s Come up for air studies the ecology of the water and its edge. Reducing these large and intricate habitats to patterns and movement, the artist maps processes of coordination in the harbour’s natural life and the port’s industry. Borrowing synchronicity from these two differing rhythms, Come up for air looks at the idea of sustenance through contrasting scales of mass economic systems and day-to-day gathering of food. 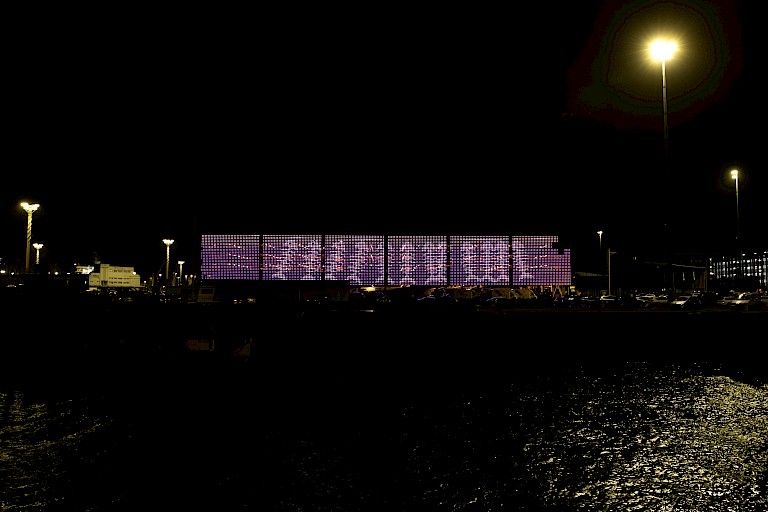 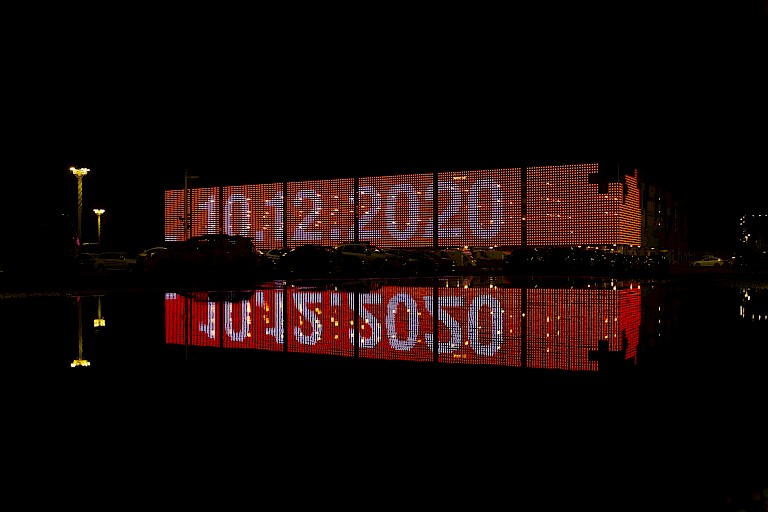 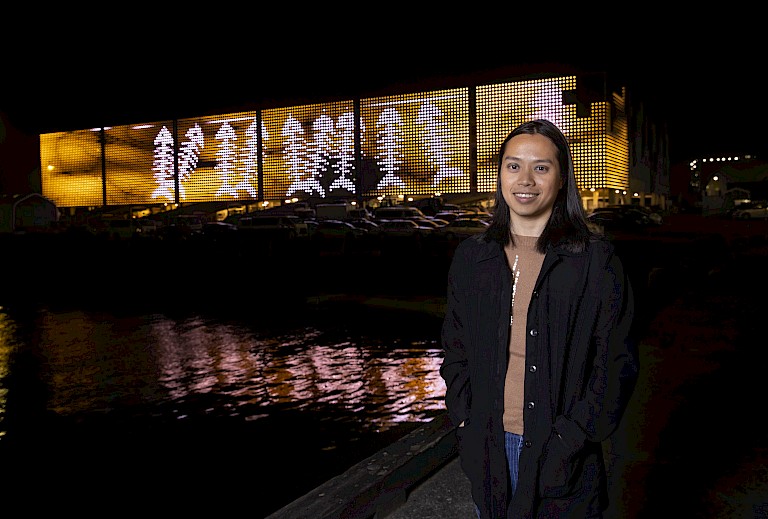 The Lightship was created by Ports of Auckland as a “gift to the city of Auckland and a thank-you to local artists” and installed on the Auckland CBD wharf, a prominent placement visible to most of downtown Auckland. It began with its first artist project in October 2020, and is updated with a new commission every two months.

Each commission consists of a programmed digital video presented on the 110-metre-long, 13-metre-high light wall that wraps around the western façade of the port’s new car handling building. It is made up of seven panels with nearly 8,500 individually programmable LED lights.

Sorawit Songsataya’s Come up for air takes the port and the local ocean ecology as its inspiration, making reference to the the “schooling” habits of both for their operation and livelihood. The work juxtaposes the schooling habits of the fish in the local area around the port as they scavenge for sustenance with the complex coordinated processes that make up the natural patterns of the port’s activities and its connections to the wider networks that sustain the human ecology.

The work attempts to compare the synchronized behaviors of individuals within semi-rational systems of behavior - whether it be coordinated movements of many trawling fish, or the hunting and fishing behaviors of small groups of people, to the mass standardization of the logistics and shipping industry that vibrates as the engine of our global economy.

These three systems are contrasted by an ideation of need - the fish only eat what they need; small groups of humans hunt beyond immediate need based on a projection of future requirements of the group; a globalized system of consumption is entirely disconnected of the usual mechanisms of need, instead producing desire and consumers: in such a system it is the product that has a need to be consumed.

Songsataya’s work makes use of the idiom “coming up for air,” as in the need for rest, to relax, after a period of “being in over one’s head,” or being overwhelmed by some task. The work then, is anchoring an urgent and vital call for a pause in human systems of extreme consumption to a location which has seen evidence of all three stages, from addressing need to over consumption.

The Lightship came about through a confluence of factors: the Ports of Auckland having a long term plan to reconcile their sprawling imports operations with increasing pressure from the local council to address what is a controversial mess right on the Auckland Harbour - a massive piece of polluting and aging infrastructure taking up a vast area of prime waterfront real estate with the appetite of the public increasingly leaning towards full removal, POAL need a public relations campaign that casts them as the good guys. This urgent need aligned with their marketing partner - who were previously artists - coming up with an idea to create a public artwork on a grand scale, at a moment, mid-pandemic, when the arts community in New Zealand were recovering from lockdowns, business closures, people increasingly out of work, a lack of sales, and the local Auckland Art Fair cut short by another small Covid outbreak in the week it was open.

The Lightship, then, is a public relations campaign that supports multiple functions: it disguises what is an otherwise unsightly car parking building right on the waterfront in a prime location (also adjacent to the location of the Auckland Art Fair and a large public. Sculpture, “The Lighthouse” but Michael Parekowhai); it gives POAL an opportunity to present The Lightship, and by association, the building behind it, as a “gift” to the nation’s struggling artists, the arts community, and the city of Auckland; and it operates as a piece of “washing” in multiple senses - it enhances the reputation of the business through association with the arts in a hyper-visible way; it enables the POAL - a company with a history of engaging Māori and Pacific Islander workers as cheap labour, and a longer history of being anti-union - to “black wash,” that is, to appear like a business that cares and has concerns for the issues of Māori and Pacific Islanders through presenting work by indigenous and Pacifica artists (all of the artists in the project so far have been Māori, Pacifica, or Asian); and it enables the POAL to “green wash” their business, which is historically, and still, a major polluter of the oceans and a massive contributor to climate change.

Seen in this context, Songsataya’s participation in the project is rather interesting, in that they seem to articulate all of the benefits that the company seeks from association - young emerging artist, Asian, gender non-binary, making work about the myriad impacts and intersections between people and the natural environment. Songsataya’s work alludes to the natural processes of the ecology of the ocean in the area, of the schooling fish and their interactions with this artificial habitat of the port structure - he alludes to the synchronicity of the port work with the that of the fish - contrasting the almost mechanical movement of the schools of fish with that of the heavy machinery which operates as if autonomously, in pattern-like behaviors - not only that but there is an implicit suggestion that the fish have readily adapted to the ecosystem that the port operations provide - the mollusks growing on the pilings, for example.

Come up for air, while it can, and is meant to be, interpreted as a call for breath, for a break from the rampant consumerism that makes ports necessary, it nevertheless makes no argument that ports aren’t necessary - quite the opposite, it places port operations, and by association, the global capital system that requires them, within a historical continuum, that reads from nature, to small settled human development, to expansion and settlement, to modern port facilities. Placed within this context, as an inevitable conclusion of development, ports - and all the environmental damage associated with them - are as natural as the schools of fish that came before them, no more than an extension of the canoe, and before it the fishing net. Ports, in this schema, are simply tools, extensions of the human arm and appetite

What one actually sees in the work however is two sets of repeated digital images, one that appears to be shoals of fish moving backwards and forwards across the length of the screen in a susurrus-like pattern, followed by cartoon-like fish skeletons being hung out on a line, as one would hang out fish to dry naturally in the sun in the pre-colonial era. The automated nature of the port is not evident in the imagery, instead, it is left implicit in the site specificity of the screen.