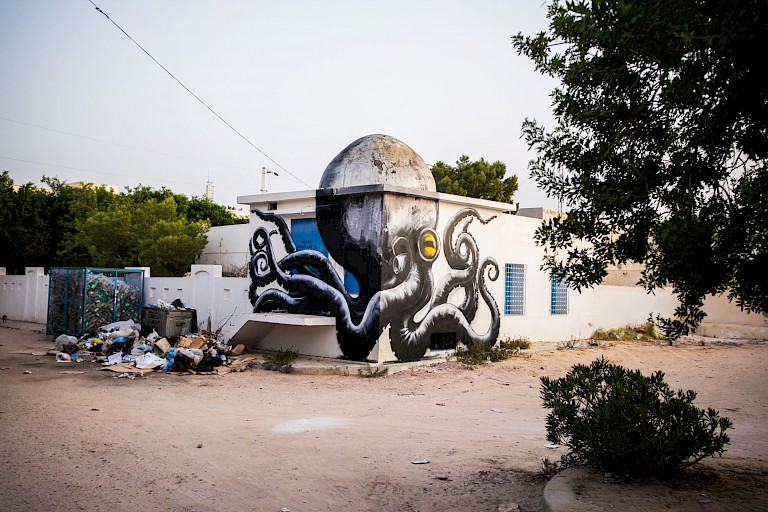 A cat watching the by passers from a letter box, the portrait of two women in golden colours overlooking ruins of crumbled stones, children playing with rabbits on the walls of an unfinished construction site, a man painting a wall with an elegant design, and a young adult starring towards the sky at the back of a deposed truck. These are only some of the 250 works of street art that have covered Eriadh since 2014, which display a fascinating assemblage of contemporary urban art.

With the Djerbahood project, the village of Eriadh has become an “open sky museum” as project founder Mehdi Ben Cheikh explains. Today it presents a “worldwide panorama of street art”. Based on the idea of making possible encounters between street artists from all over the world and local inhabitants, this project has transformed the village on more than a visual level as the participating Monica Calai sees it: "I think the best part of things, of projects like this, is that they are very community oriented, so many people get to communicate with them, see them, experience them."

In an impressive effort, the initiative by the art gallery Itinerrance has truly managed to produce an accessible, integrative and open museum showcasing some of the finest street art, while visitors wander through the traditional architecture of a village in Djerba.

The excellence of the project Djerbahood lies first and foremost in the very high quality of the 250 works produced. The paintings realized testify the high aesthetic skills of the invited artists, especially as many of the works manage to either (critically) comment on local structures, global problems or impressions gathered in Djerba. Some, if not most, of the works perfectly blend in with the materials on which they are painted and re-interpret their enviornments. This contextual sensitivity characterizes the pieces of immobile street art works and have become to forms of perfection in the Djerbahood project as artists did not have to fear being prosecuted for painting walls.

The quality of the works that insert themselves organically and provokingly into the local architecture became possible by the approach chosen by the organising team of Djerbahood. With the invitation to locals to actively support the street art project by offering their own buildings walls, the inhabitants, organizers and artists opened a space for a conversation about art, politics and different lives around the world. The coming together of such differences is what sociologist Andi Merrifield calls a “politics of encounter”, which is crucial for today’s struggles for a right to the city. A right, which opens spaces for bringing together differences and commonalities, local inhabitants and international guests, street art and traditional architecture. Such processes involve people and offer them the chance to appropriate spaces, their own spaces.

The works realized in the project Djerbahood did not only add a layer of aesthetic, but have transformed the village Erriadh in a more profound way by re-defining its public spaces through art. A process of highest aesthetic and social qualities.

In 2010/2011 the first revolution of the Arab Spring in Tunisia swept away president Ben Ali and opened new spaces for public art. Street art movements like the collective Ahl Al Khaf have spread like a rhizome and local Tunisian artists have left the capital city of Tunis and other major cities of the country. But how do some of the best street artists from more than 30 countries come to leave their traces in a village on Djerba island?

Mehdi Ben Cheikh found the project “Djerbahood” to bring 150 street artists to the Erriadh in a ambitious attempt. As director of the Itinerrance Gallery in Paris, Cheikh could draw on previous experiences of the project “La Tour Paris 13”. In this he had gathered 108 street artists to decorate a former housing tower in the 13th arrondisment of Paris and opened it for a 30day exhibition before the tower’s demolition. In project Djerbahood, the scale of the project expanded once more. This time Cheikh invited street artists who came from 30 countries all over the world and opened an entire village in Tunisia to the work of street artists.

A major reason for choosing the place of Erriadh is directly linked to the revolution leading to a decrease of tourism, worsened by terrorist attacks in 2014 and 2015. With a collapsing garbage collection system, the village of Erriadh that has not made it on to major tourist tracks, witnessed its architectural jewellery decaying due to economic hardship. In order to re-create the beauty of the old town and open Erriadh for tourists, the project invited inhabitants to offer walls, doors, windows, fences and other spaces to the street artists brought in by the Djerbahood project. Within four months in 2014 the impressive result was realized and quickly made Erriadh known as one of the most exiting villages for public art worldwide. Major media outlets – New York Times, Le Monde and AlJazeera – portrayed the project and today the village attracts more visitors than ever before. 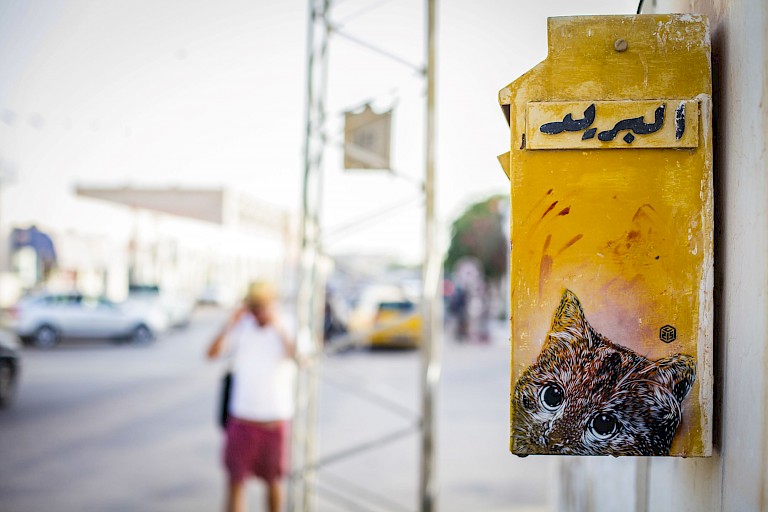 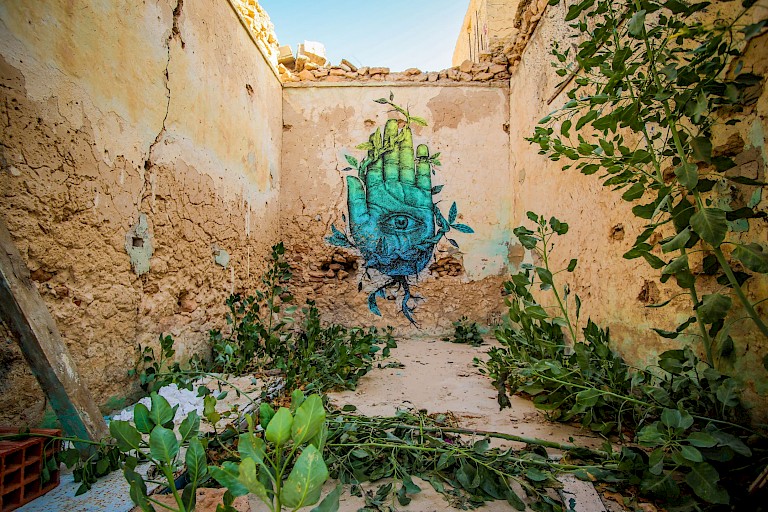 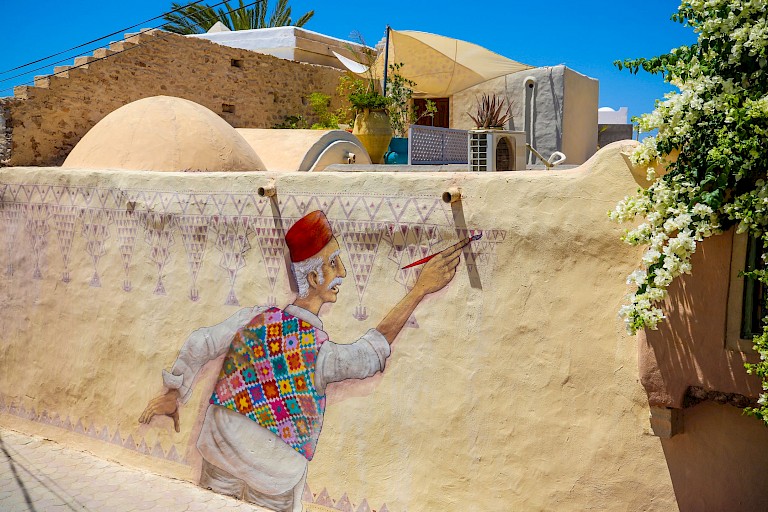 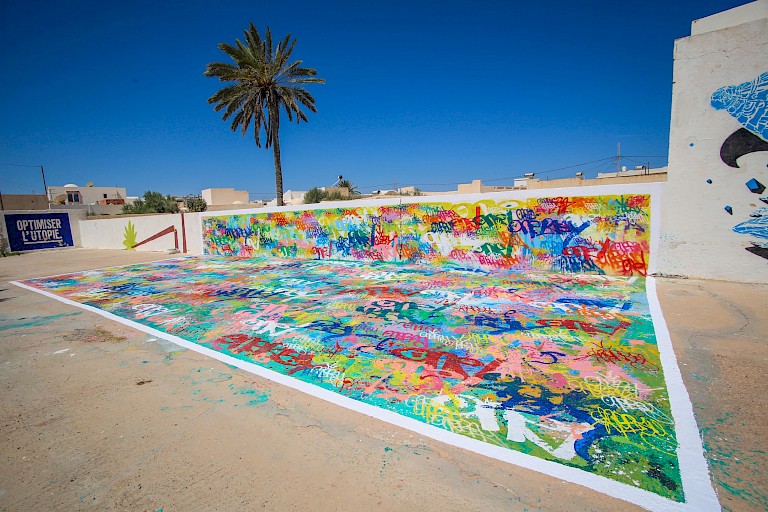 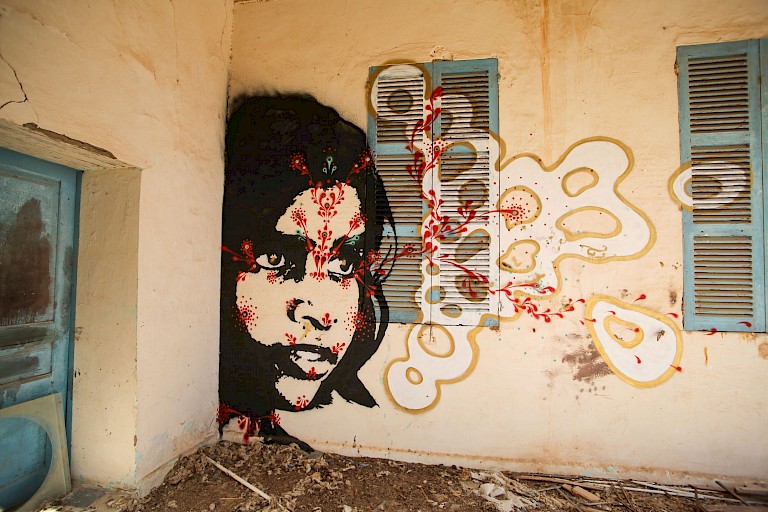 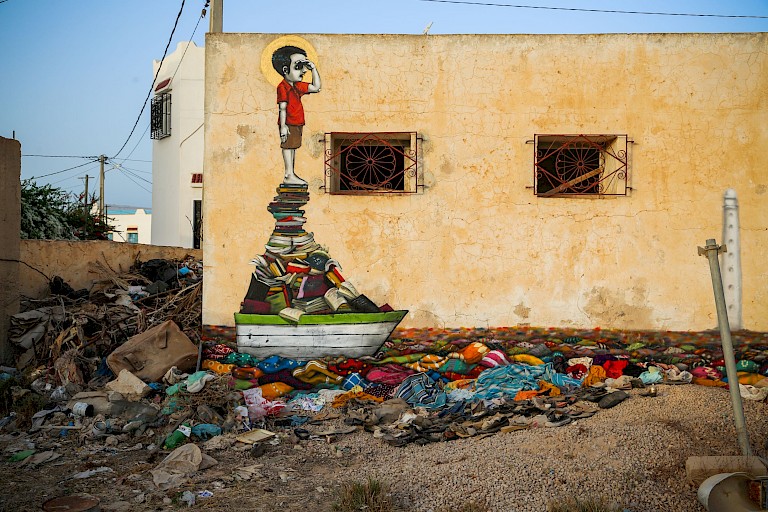 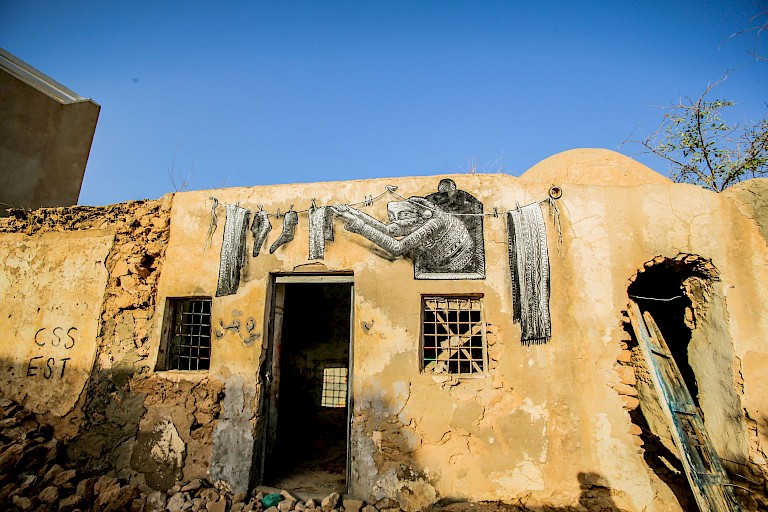