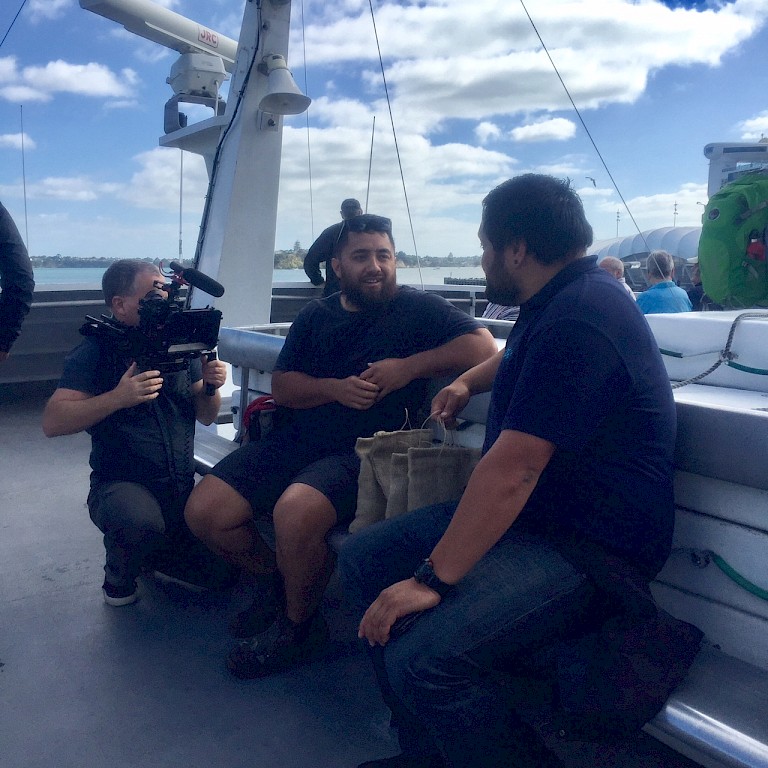 Jeremy Leatinu’u is an artist of Samoan and Maori heritage who makes art works that subtly intervene in the places we live. His performative-based practice makes visible the spaces, interactions and social structures that constitute urban places. His practice has a deceptive simplicity, yet his art works engage with complex histories and pose conflicting questions regarding societal order, global mobility and the precariousness of marginalised lives. Earthpushers (2017) was a performative and participatory art work developed for the 2017 edition of Sculpture on the Gulf on Waiheke Island. Leatinu’u created his work around the ferry ride to Waiheke, which provides transportation for commuters to Auckland city, and for hundreds of tourists each day to visit the Island. Earthpushers invited people to pick up a small bag of soil from the Auckland ferry terminal and contemplate the idea of transporting earth over water and from one place to another, in this case from Auckland to Waiheke. Along with the small bag of soil participants were given a flyer with information on the project and the concepts behind its creation. Once transported, the bags were left at a marked drop-off point on the Matiatia Bay foreshore.

Earthpushers drew its impetus from the history of shingle extraction from Waiheke beaches, and also the notion of how digging, shifting, and selling earth around the world has been a human practice for centuries. As Leatinu’u points out “In Māori legend even the great Māui talks about how his brothers were quick to carve the skin of the great fish into rough and jagged mountains and hillsides.” In colonial times, the reshaping of land through earth movement took the form of the removal of thousands of cubic metres of shingle and sand from Waiheke beaches in the 1880s. Used for concrete construction to create buildings and roads in the new settlement of Auckland, huge quantities of shingle and sand were removed. In about 1920, with the best beaches already mined out, the practice was stopped on Waiheke to protect the land. However it was too late, shorelines had already been stripped and exposed to environmental damage, leading to coastal erosion that is still visible today. Known as ‘shinglepushers’, the men who worked the beaches gave Leatinu’u’s project its name.

Consulting with Waiheke Island historians and the local community, Leatinu’u also created dialogue with and sought the blessing of the Ngati Pāoa iwi (the indigenous tribe connected to Waiheke Island) for the project. By drawing on the Island’s history of extraction, the project offered a very site specific response to Waiheke’s past and still visible present. Leatinu’u sought to create an art work that addressed a history not commonly known to those outside of Waiheke’s own residents, and offered a gesture of remediation to the land. To honour this, for the artist the provenance of the soil was crucial, it had to be biohazard and contamination free, and also from the rohe, or area of land within a generally recognised boundary of Ngati Pāoa but outside Waiheke Island. This gesture of transporting earth can be seen as a return to the Island as well as a time to reflect on our own relationships and histories with the concept of earth. “Through this action of transporting close to a tonne of soil through the actions of a large number of tourists, visitors and locals - plus the artist’s support team who made, filled and stitched up the hessian bags - the material body of Waiheke Island is reunited and rebuilt” critic John Hurrell commented of the project.

Land and connection to earth and place is important in every culture. For Māori, the indigenous people of Aotearoa-New Zealand, earth has deep significance. Māori have strong spiritual bonds to the land and the word for land, whenua, also means placenta. Traditionally, the whenua of a newborn baby is buried in a sacred site, the practice reinforcing the relationship between the child and the land. Land was also significant to the colonial settlers for more commercial reasons, yet the action of sand and shingle extraction also plays into the early European history of Aotearoa-New Zealand in a significant manner.

As a participatory project, Earthpushers exhibits a desire to embed things back into a visible dialogue between people. While object-based art work allows the viewer to walk on or look away, the collaborative nature of Earthpushers extended the critical moment and immediacy between audience and art work. Transforming the audience into active participants, Jeremy Leatinu’u created what Robert Rauschenberg called “a living, palpable force of contact.”

This is especially evident in how the Waiheke community embraced the project. Many commuters travelling from Waiheke to work in Auckland City would pick up a bag in the mornings at the Auckland ferry terminal as they arrived to ensure they could participate, knowing that Jeremy would have packed up by the time they finished work. Taking the bag to work and keeping it with them for the day, they then would return to Waiheke on the evening ferry and deposit the bag of soil at the depot. Creating more connection with the local community, Leatinu’u arranged for the bags of soil to be gifted to the Waiheke Resources Trust after the exhibition. Used to create gardens, the soil now forms part of a garden that grows vegetables and herbs for free community meals. Earthpushers was a project that spoke to and relied upon collective effort. Transferring 500 bags, or roughly one tonne of earth across the Waitematā Harbour during the project’s duration, the art work inspired overwhelming participation from virtual strangers - tourists, visitors to Sculpture on the Gulf and ferry commuters.

Earthpushers is a reconstruction and remediation of a particular environmental, historical, and social event in the history of Aotearoa-New Zealand. Like much of Jeremy Leatinu’u’s practice, Earthpushers consisted of a humble action that profoundly engaged with the complex nexus of time, place and people. Earthpushers sits at the intersection of art, place, and community, offering an active and purposeful engagement with the social, political and ecological histories that make up our cities. 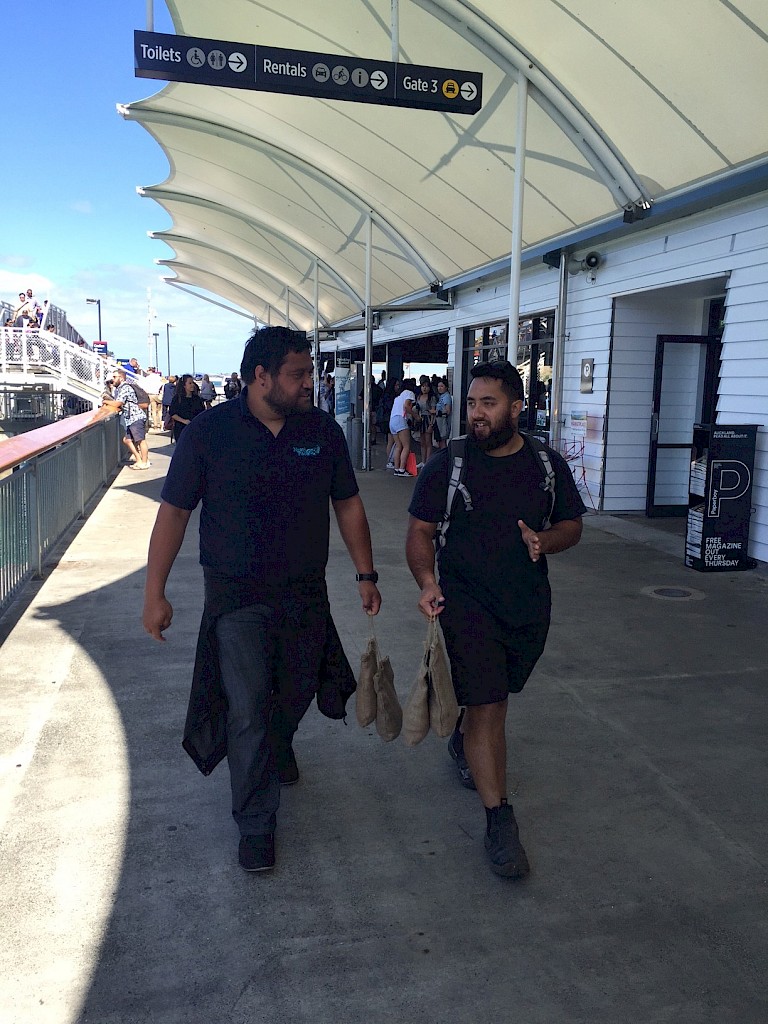 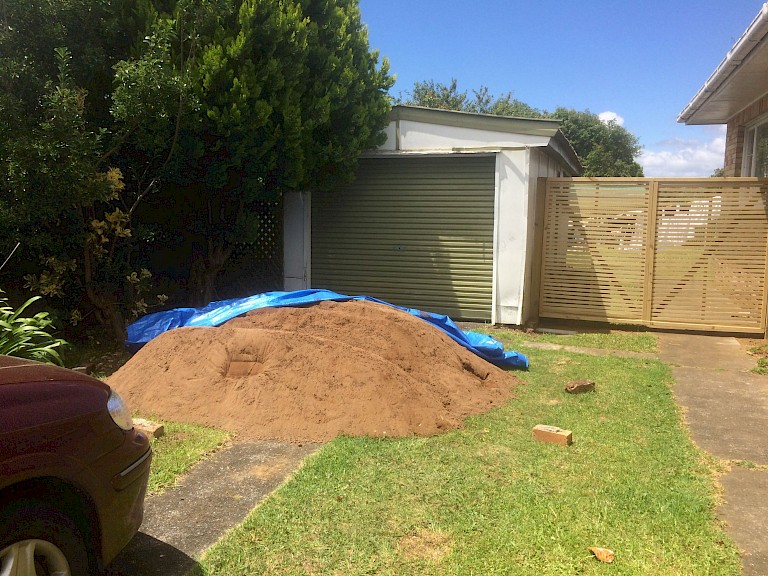 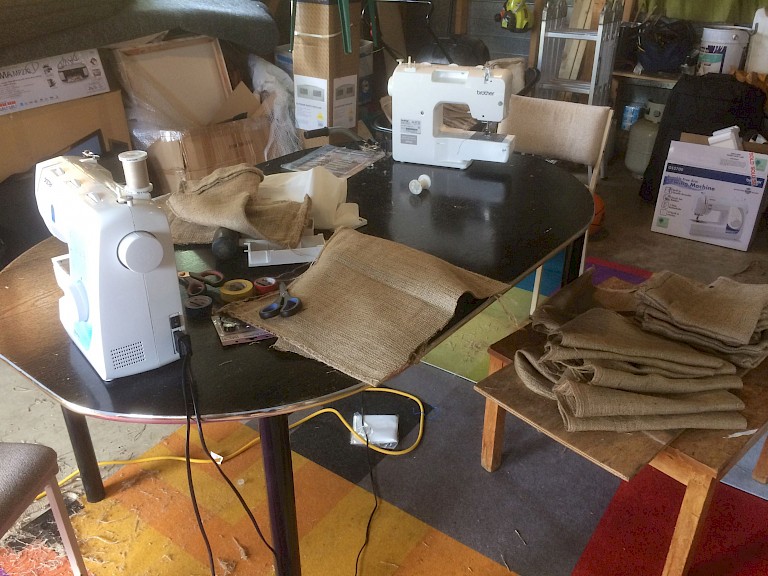 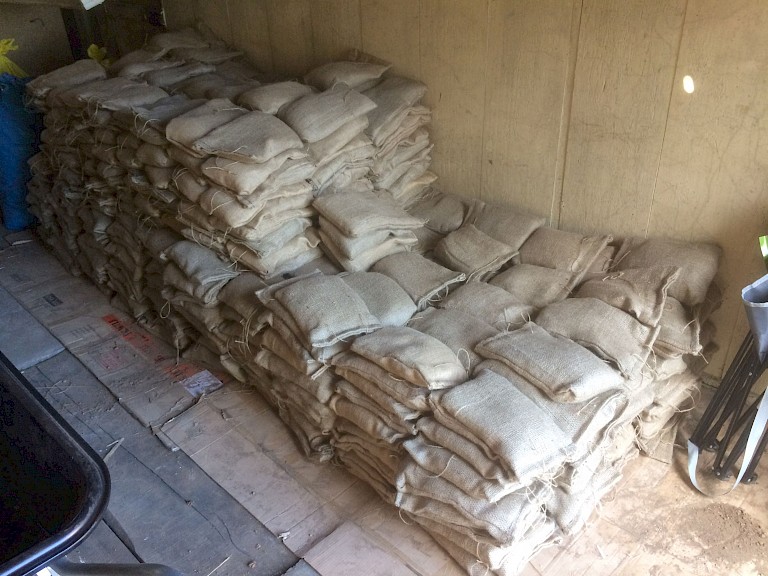 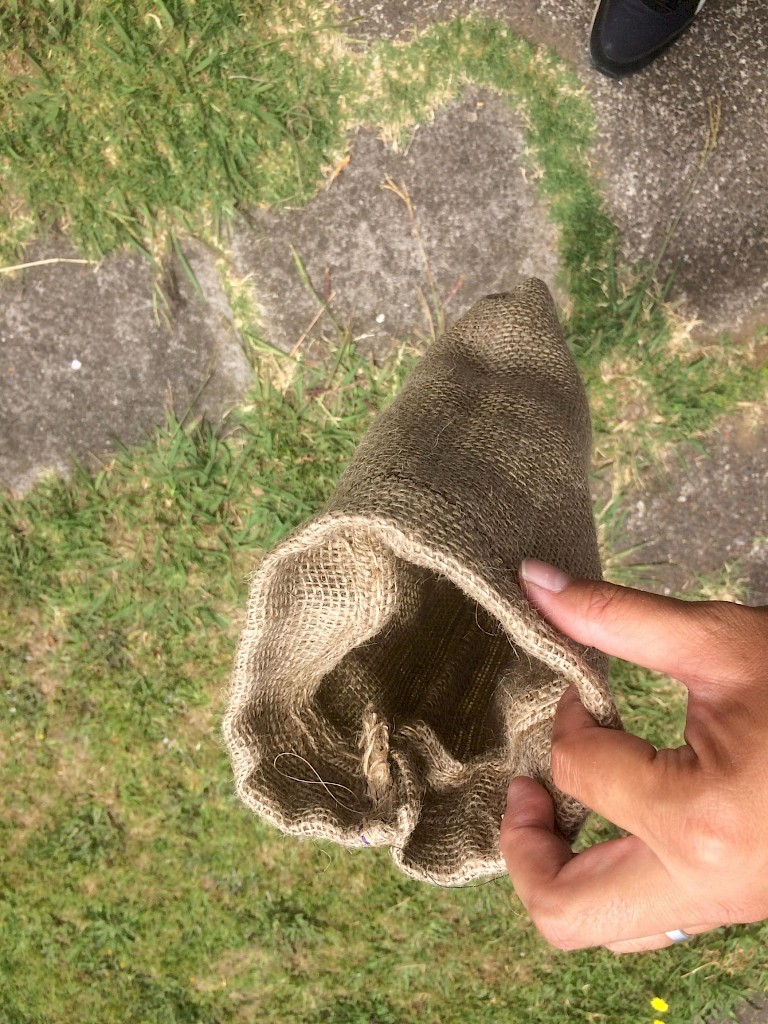 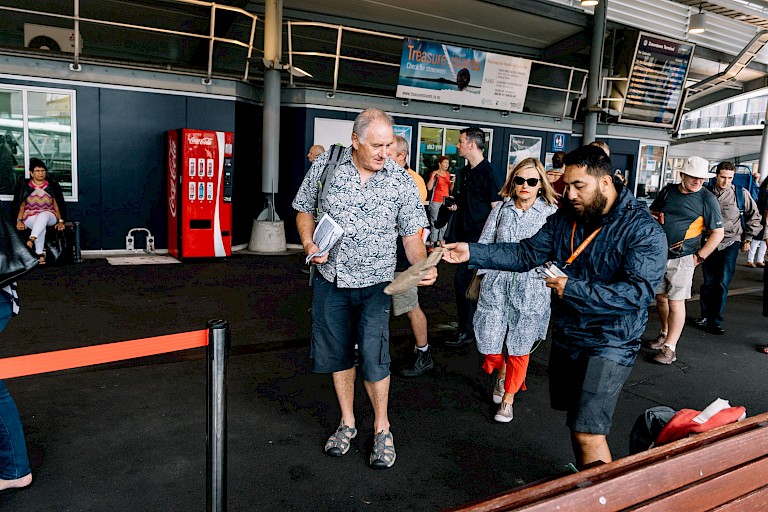