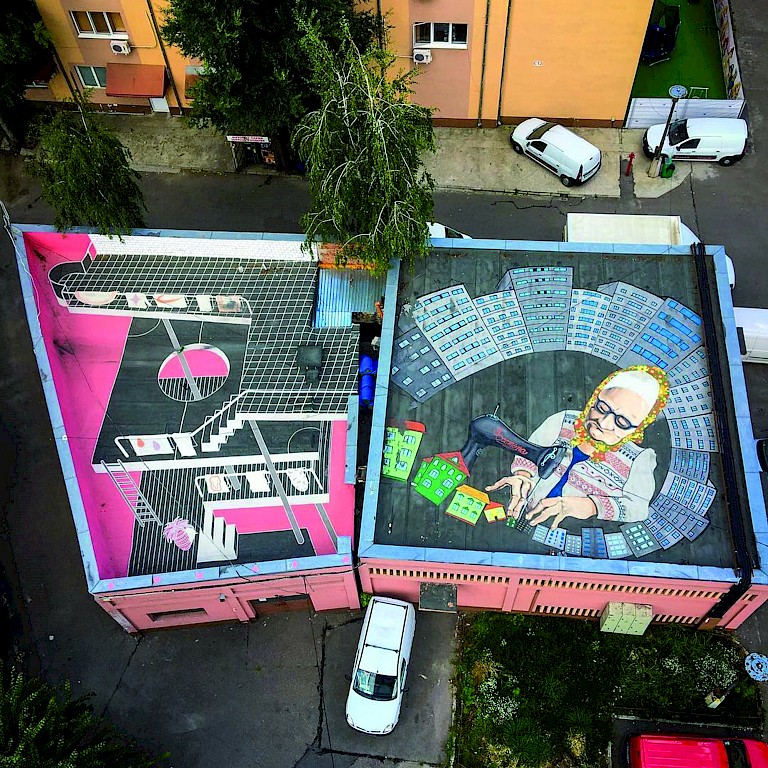 The Giants of Pantelimon project was initiated in 2016 and developed by Mădălina Roșca and Paul Arne Wagner, documentary artists. The project started from the idea that “without the past, there is no future. There is a real need to get in touch with our recent history, a need to try and understand the big transformations behind us, in order to be able to understand and shape the transformations lying ahead”. In 2017, with the help of an anthropologist, Andreea Drăgan, the stories of the neighborhood were collected on a post-modern anthropology platform. The neighborhood’s inhabitants tell their stories, the national and international artists climb the rooftops, and the public admire them from the tower. The life of the neighborhood, which is not written in any history book, remains there, for anyone who finds it, whenever one takes a stroll through the past and the contemporary history of Bucharest. 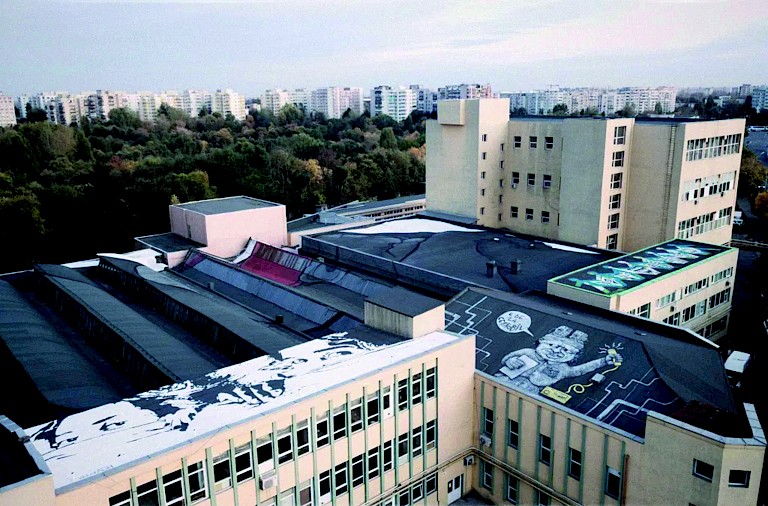 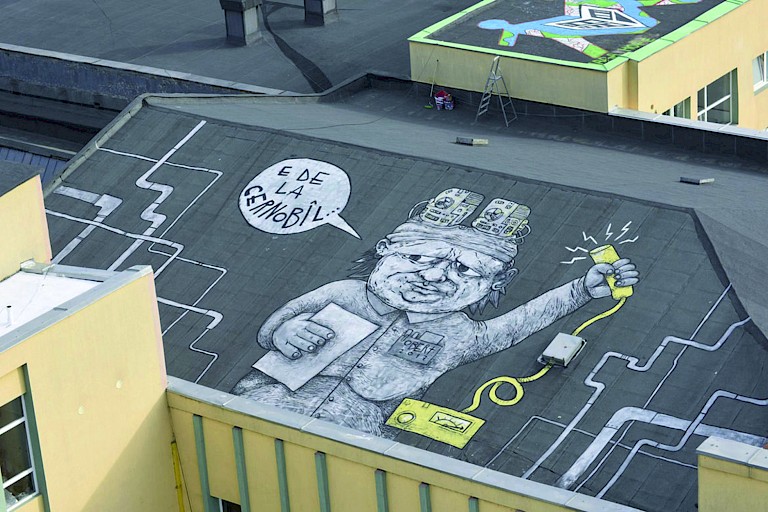 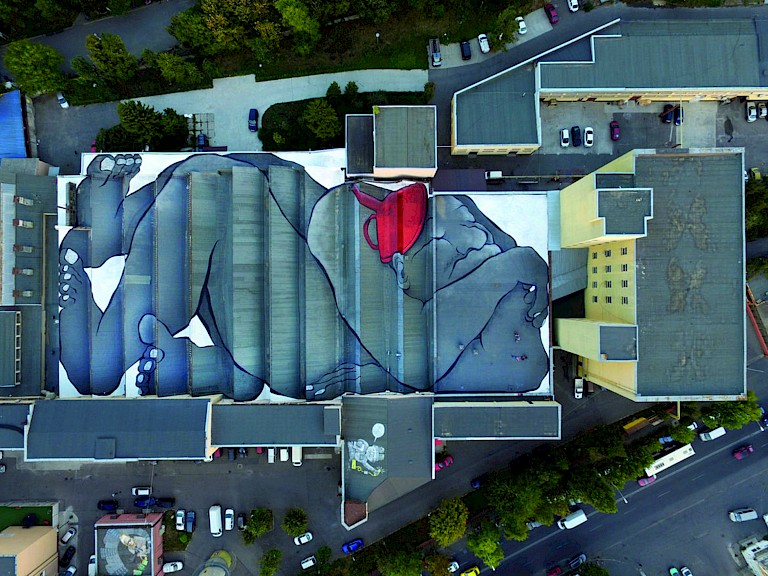 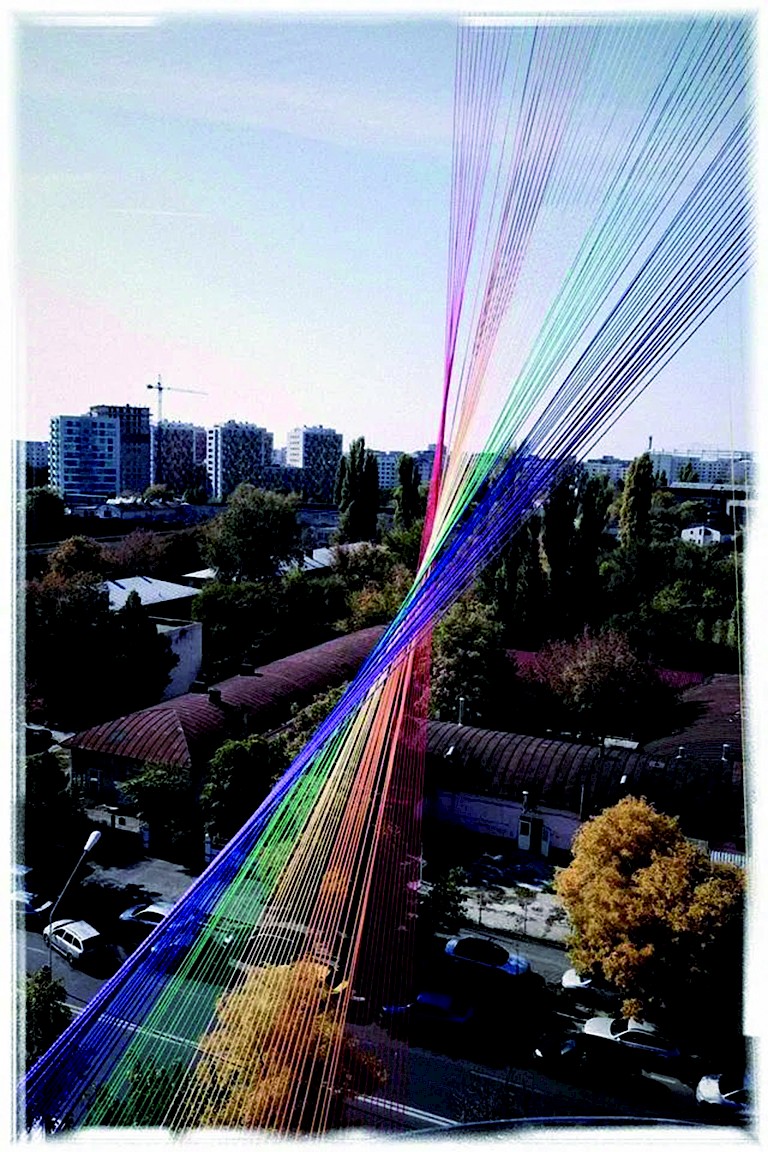 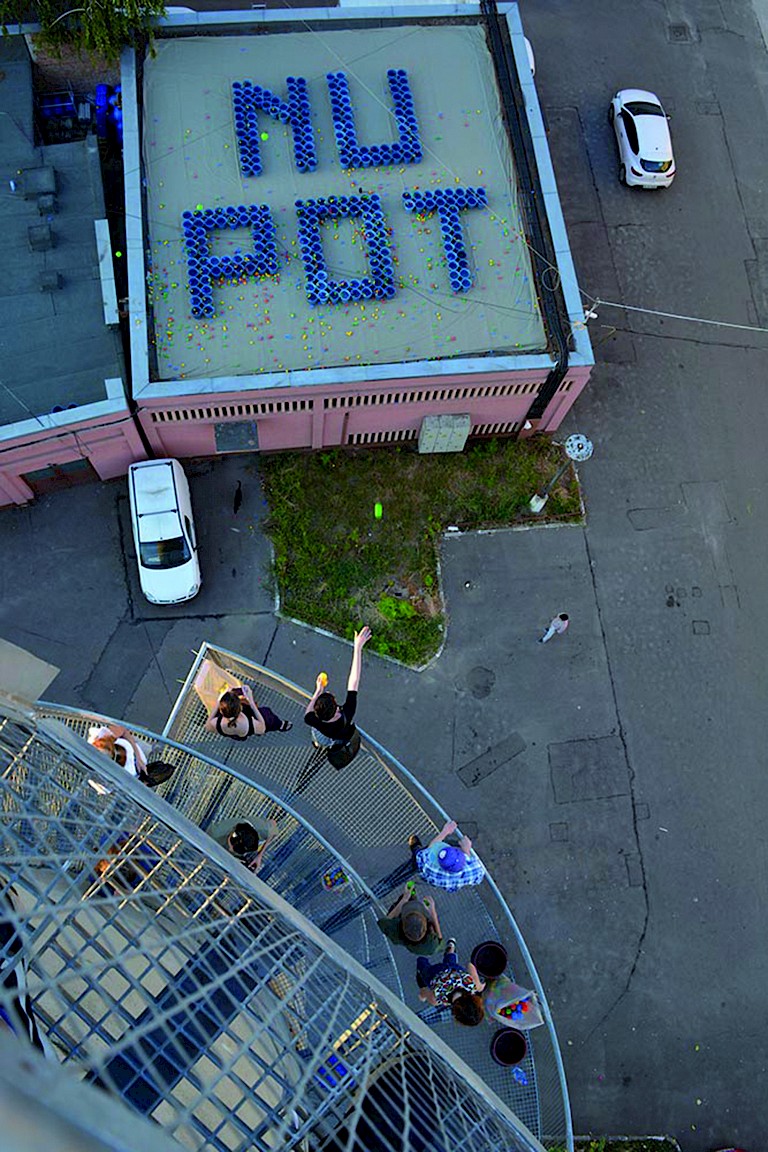 The Giants of Pantelimon project was initiated in 2016 and developed by Mădălina Roșca and Paul Arne Wagner, documentary artists. The first work made within the project was by the couple of artists BoeMona, from Constanța, Romania. In the middle of the work, the textile worker is evoked, the one who in the ’70s, at just 17 years old, was brought from a village in the south of the country to work in the factory, in three shifts. Demolitions of the neighbourhoods around the factories gave way to blocks of flats for factory workers and their families.

Tom (Sorina Tomulețiu) named her project an eco-friendly installation made of grass, “Where No One Looks”. Sorina was impressed by the story of the urban spaces where the nature manages to survive under the indifferent eye of the passers-by. Her message draws attention on the lack of clarity in managing the public space, the places “hidden in plain sight” that nobody cares for.

Robert Obert interprets the story of the woman sent by the factory to measure the radiation level after the tragedy of Chernobyl. He was impressed once by the story itself and then by the way it was told, how she was put in that situation, and especially the repercussions she tells more jokingly or more seriously in the short story he chose.

Nomado (Onar Stănescu) was intrigued by the colours behind the grey blocks, where the people hang their clothes to dry, live, love, fight, look for their meaning in life while making their living in the concrete layers of the city.

Nada Krstajic, from Belgrade, paints a human-city mandala, a “hora” (a Romanian dance in which the performers form a ring) made of life and concrete. In the Serbian artist’s vision, the contemporary architecture with its modern buildings next to old blocks of apartments is mixing with the industrial architecture, and all of them alternate in a colourful dance between people and nature.

Alexandra Cristina Comănici comes with strings attached. Using mannequins and strings – former materials of the factories in the area – she illustrated a little of each neighbourhood story: the generation with the key to the neck or the work in spinning.

Other artists were invited based on their reputation in the field. Known for its large monochrome murals and inspired by the stories of Romanians during communism, Victor Ash, a Copenhagen-based artist originally from Paris, France, chose to paint, in Bucharest, two inhabitants under the duvet. Ash’s two sets of piercing eyes are a stark reminder of the illegal abortions performed in Romania between 1965 and 1989. Moreover, the half-hidden faces point to the lack of heating in apartments.

Street art duo Ella & Pitr draws cramped, sleepy giants. Known for creating some of the world’s largest murals, the latest on the rooftop of Parc Expo in Paris, the artists adorned Pantelimon with a contorted giant wearing a funnel on his head. Their inspiration was an old porcelain trinket depicting a drunken man holding a bottle of wine.

The Milan-based socially engaged artist, Biancoshock, known for his ephemeral installations, created a site specific installation “NU POT” (which means “I can’t”). Hundreds of buckets full of water were placed on one of the roofs next to the tower to reproduce the words “NU POT”. The roof surface was covered with cloths found in the industrial area, the same cloths that were produced for decades by the factory former workers. The visitors could climb the tower staircase (a metal grill core staircase that made people feel uncomfortable and dizzy the more they climbed up) and, from up there, they could throw coloured balls trying to get them into buckets. This had the aim of discouraging in a simple and funny way the concept of impossibility. The important thing wasn’t sending the balls into the baskets but their attempt. The written words NU POT were deliberately divided into hundreds of parts (the buckets) to prove that the desire of freedom of thought can be satisfied thanks to everyone’s attempts and effort, and it gives us the opportunity to forget years and years of bans. The hundreds of people that took part in this “funny” action forgot pretty soon about their vertigo. This work is dedicated to Miss Nela and all her colleagues who worked for several years inside the building and who told the artist what it meant to work under a dictatorship based on just one belief: you can’t.

Within the global protection of the built heritage different possibilities concerning the preservation of industrial heritage becomes more and more popular. The intervention deals with the re-use of post-industrial buildings within the framework of culture-led regeneration. In an era of ever increasing globalization, together with a growing competition between cities and urban regions, “identity” becomes a key notion. And there is a vast potential to use industrial heritage for promoting a positive regional image through the organization of cultural and artistic events.

Make a Point developed Giants of Pantelimon project starting from the idea that “without the past, there is no future. There is a real need to get in touch with our recent history, a need to try and understand the big transformations behind us, in order to be able to understand and shape the transformations lying ahead”. Pantelimon is one of the most notorious neighborhoods in Romania, which owes its reputation to the Hip Hop movement which exploded here in the early ‘90s. Very explicit songs boasting about the dangerous life in Pantelimon, drugs and hustlers were to be heard from old tape recorders all throughout the country, in every park, behind the block, in any garage. The Hip Hop that emerged here focused on contemporary life and issues in Pantelimon, still it was relevant everywhere in ‘90s Romania. It represented the soundtrack of a flagrant break between generations. Today Pantelimon is struggling to find an identity.

After the second World War, many blocks inspired from the cvartal typology were built, low, only three or four stories, organized around a vast interior courtyard, with green spaces, playgrounds, trees, gardens, even fountains (still to be found today in those parts of Pantelimon closer to the center of the city). Up until the mid ‘70s, Pantelimon had been a neighborhood of modest houses, where small scale farming with animals, pigs and the entire compound, were cohabitating with humble factories dating back to the ‘20s, surrounded by lakes and a lush nature scape. After ‘70s, these houses become hidden to the eye due the construction of a continuous chain of grey and grandiose blocks of flats.

Despite the initiative of the city hall of taking advantage of European Funds to start a process of thermic rehabilitation and in the course also give Pantelimon a new, more colorful face; the results are far from optimal. Pantelimon today, in the struggle of finding its identity, is kind of lost between all these realities which continue to exist side by side, often antagonizing each other. Tall blocks with views to the main street, small blocks of inferior categories hidden behind the first chain, conflicting with giant remains from the times of forced industrialization and the potpourri of small houses, and even some villas, survivors of the demolitions. Pantelimon has a soul, there are almost 100,000 people striving to make a life there, and with Giants of Pantelimon there is hope to inspire them on the way.

The aim of the project was to contribute to this necessary process, to bring to life the often overlooked local dimension of history, the unexplored little stories which deserve to be heard because only they can bring the past of a neighborhood into the light. By looking only from the center, without exploring the neighborhoods of the former socialist workers, where the majority of the city’s inhabitants still live, the Eastern European cityscape cannot be understood.

Once the exhibition was opened, there were organized activities and visits to the exhibition. The people had also the possibility to vote for the most appreciated work. The most voted work was the network of rainbow threads made by the artist Cristiana Comănici around the Art Tower, a tower that, since October 2017, has become the zero point of another kind Pantelimon, a more colorful one.

The works can be seen from dozens or hundreds of apartments and office buildings around, but also through Google maps, drones and similar technologies. Unique is precisely the fact that the sum of the works can be viewed from a fixed point, on the last platform of the Art Tower. [The Lebanese artist and architect, Daniel Georges was chosen by public vote for the first pilot work on the water basin; so, he created the Green Curtain.]

So, Giants of Pantelimon offers access to culture in the cultural desert from the east of Bucharest. Its purpose is an open-air urban art gallery, unique in the world, which brings in the attention of the people from Bucharest another face of the neighborhood, proposed by those who know him best: its inhabitants. In other words, through fieldwork and the call for stories, the initiators of the project proposed an alternative to the stereotypes taken from the lyrics of the songs composed "after the gray blocks".