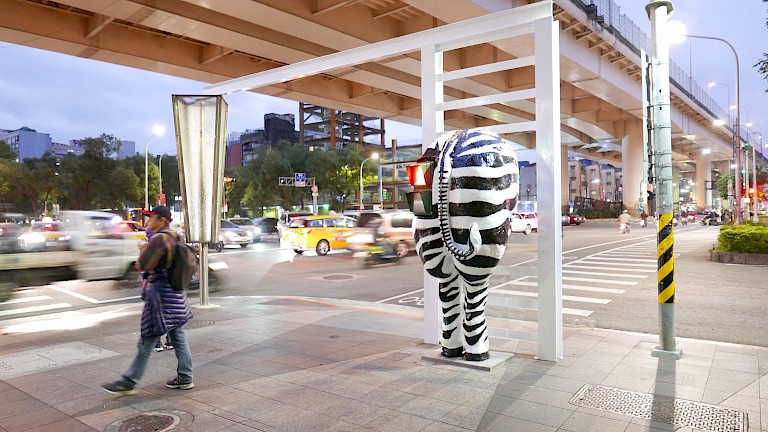 "Time Zebra Crossing" is a sculpture that has been standing on the bustling streets of Taipei for more than 20 years. Its creation was born at the same time as the public art laws and regulations promoted by the public authorities in Taiwan. Nine permanent works of art, "Time Zebra Crossing" is one of the masterpieces. Due to its distinctive appearance, high interaction, and popularity among Taipei citizens, it became a key demonstration case for re-examining and improving Taiwan's "Public Art Installation Measures" in 2017, and it is a microcosm of the implementation of Taipei City's public art policy. After optimizing the implementation of the work, it has a new life. It not only reconnects with the place, but also serves as a model for the government to promote the optimization mechanism of public art. 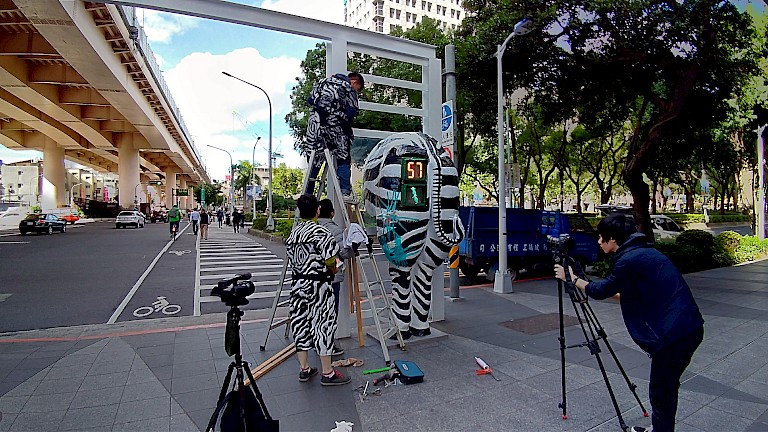 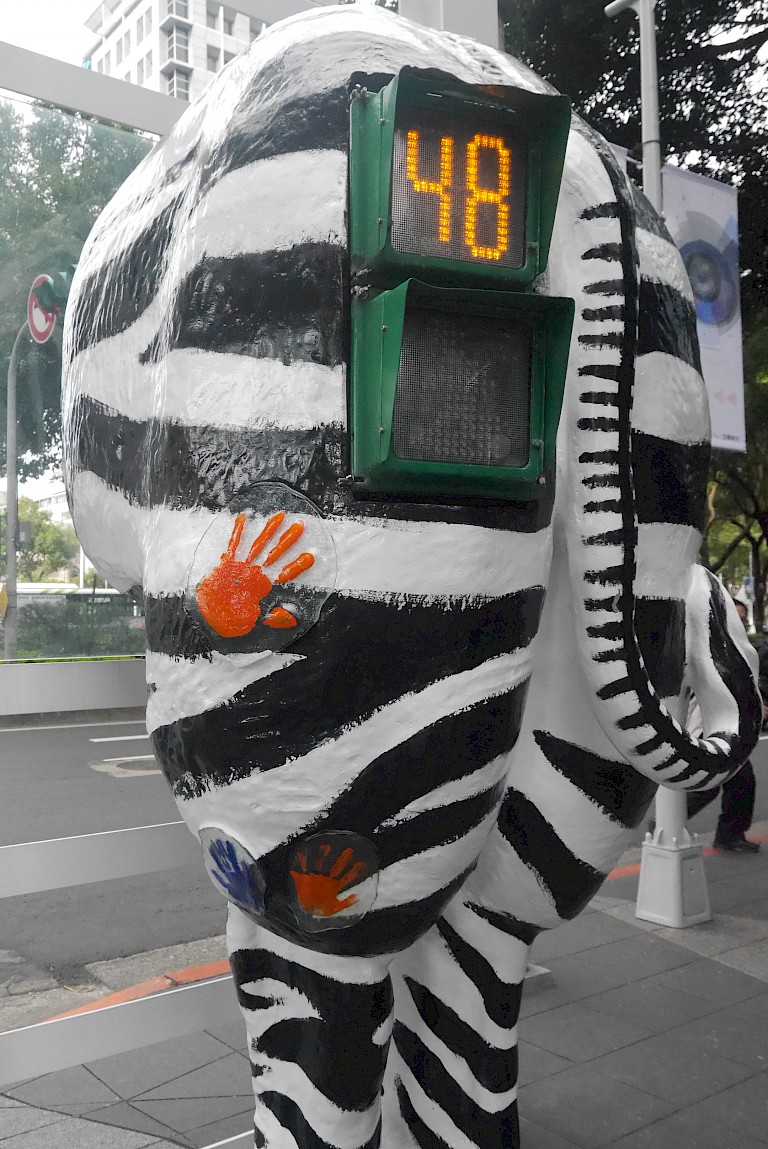 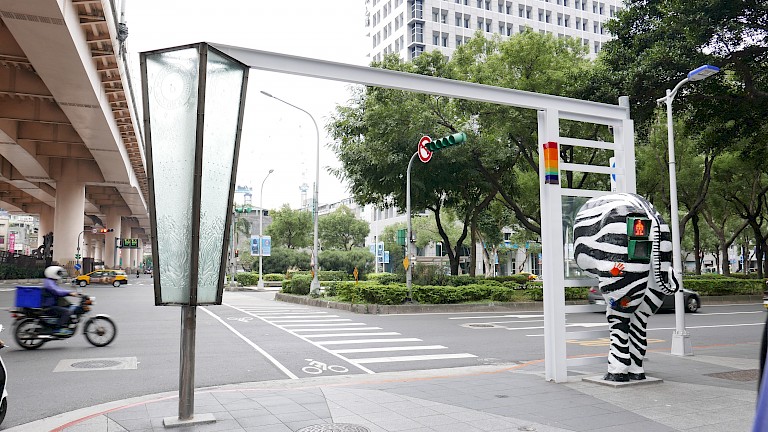 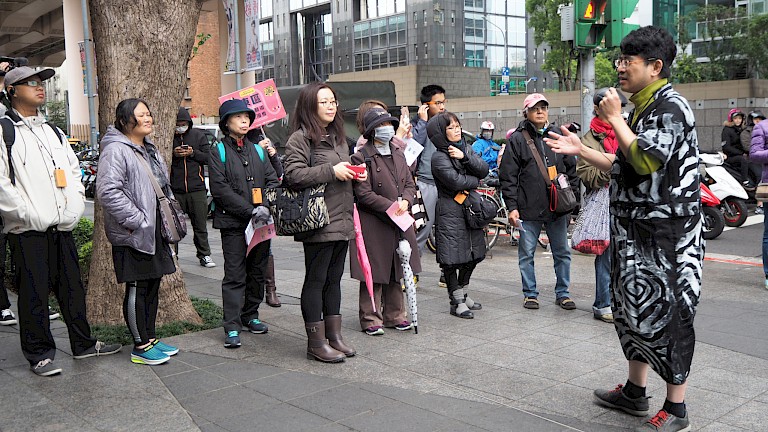 Artist Huang Zhongyu’s "Time Zebra Crossing" was set in 1999. At that time, the Taipei City Government set aside funds for the newly promulgated "Measures for Public Art Installation" and promoted the transformation of the urban public environment. "Art Corridor" is hoped to be an inspiration and raise the public's awareness of public art.

Although the nine works have their own merits and show their own interests, "Time Zebra Crossing" is still a rare type of humor in Taiwan's public art today, more than 20 years later. It is at a crossroads filled with people, next to the zebra crossing, facing the road in a zebra half-length position, and the horse butt is facing the pedestrians waiting for the traffic light. When the pedestrians look at it, they will also see two handprints on it. One red and one green pat on flattering impartially. The traditional culture of "flattering" means to please others through praise and flattery. Seeing the visualization of "flattering" makes people can't help but smile.

There are countless public arts like this that have "fallen out of favor" because of their lack of brilliance. According to the public art inventory research conducted in Taipei many years ago, the main cause of public art "aging" is "time", then "material and construction quality", and secondly "external environment."
In addition, although it is not listed in the top three, it is "human factors" that often cause unnecessary major "damage" of works. "Unintentional damage" is improper maintenance and cleaning methods of the management unit; "intentional damage" is Graffiti, nicks, stepping, etc., were forced to leave the mark of "come here".
From 2016 to 2017, the Taipei City Government initiated a review and investigation of the management and maintenance of public art. In this way, the "Time Zebra Crossing" under the background of time and space brings together various phenomena that have yet to be explored and resolved in the development of public art in Taiwan. In this way, the Emperor Gate Art Foundation proposed the "Highlight Project" and developed the "Optimization Trilogy" with "Time Zebra Crossing", directly inviting the artist Huang Zhongyu to work together, and through actual operation and recording, it will be provided for future public art works to launch. A model of "Circular Mechanism".

After ten years in France, Huang Zhongyu, who is also an architect, interior designer, photographer and art worker, has been actively engaged in public art and space planning after returning to Taiwan. One of the most well-known works is the "Time Zebra Crossing" located in the Dunbei Art Gallery-a traffic light shaped like a zebra butt. Beginning in 1999, Huang Zhongyu established the "Image Chronicle Creation Workshop" and opened a mixed-management "Diffuse Café" in the community where he grew up. From coffee cups, table tops, lampshades to door doors, they are filled with the ingenuity of glass light and shadow. think. The café also often holds glass kiln-firing teaching, so that children from retired silver-haired people have the opportunity to experience the mystery and fun of glass creation. In addition to continuous teaching and creation, Huang Zhongyu also actively participates in the design and production of domestic self-made kilns to make the promotion of glass art more popular, hoping to let art enter the community and life.