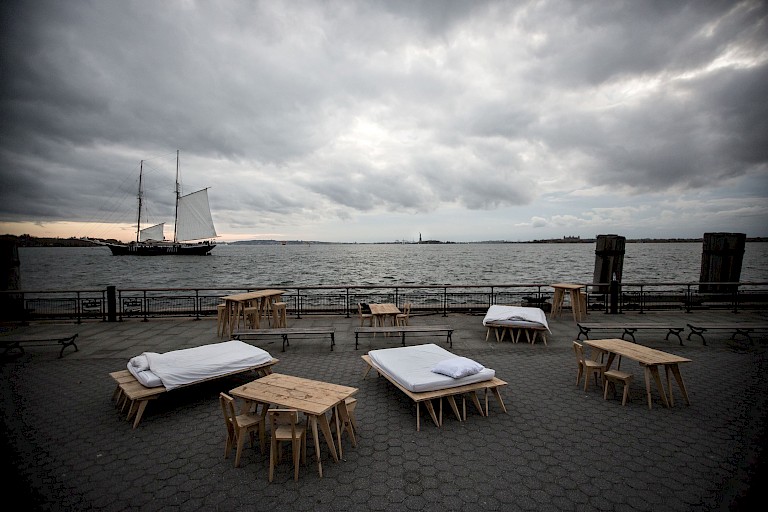 Hotel Empire : The New York Crossing (2015) is a public art work by the French artists Laurent Boijeot and Sébastian Renauld, collectively working under the name boijeot.renauld. The artists work in ‘actions’, performative durational works that take place internationally across a number of cities and towns. Hotel Empire : The New York Crossing took the form of a one- month migration through the length of Manhattan, New York, via the celebrated Broadway axis. Starting at 125th Street in Harlem and covering roughly five blocks each day, the action progressed south to Lower Manhattan, passing through some of New York City’s most well- known landmarks. The action culminated at Battery Park, looking across to the Statue of Liberty, on 25 October 2015.

Carrying simple tables, chairs, bedding, and suitcases, the artists lived and slept out on the streets of New York for 30 days, accompanied throughout the action by photographer Clément Martin. Assembling the furniture by day to create seating and shared public areas, Boijeot and Renauld made coffee for and invited passers to engage in conversation, a game, or a meal. At night the artists reconfigured the furniture to create numerous beds and slept on the street, offering space to anyone who wished to sleep in one of the beds, and bathing at the homes of strangers who became friends. As they moved, ate, slept and engaged with the public through various districts and neighbourhoods along the length of Broadway, Hotel Empire : The New York Crossing created occasions for shared connection and collective memory in ways that are uncommon in large cities.

boijeot.renauld have conducted a series of such actions internationally, changing logistical configurations according to the location and expanding into greater numbers of beds (50 in Nancy, France) or contracting to just a few pieces of furniture carried by hand (Venice, Paris, Basel, Dresden). The artists are clear that Hotel Empire : The New York Crossing and other performances undertaken in the series are firmly considered performative art works, and not a statement on homelessness in any way. With backgrounds in the disciplines of architecture and sociology, as well as graffiti and juggling, the artists’ practice playfully explores concepts of urban communal space, architecture, and questions what it means to be able to freely inhabit a public area. Asked about their approach to public space the artists contend that “‘Public space’ is not a concept we use (there is no public and space is an invention of modernist architects...). We use ‘street’ or ‘common ground’.” Yet, as public shared space in Manhattan and many other international centres shrinks due to private ownership and heightened anti- terrorism security, questions of access to and behavioural controls in such spaces are evoked by the work. As measures to restrict critical voices in the public sphere increase, Hotel

Empire : The New York Crossing offers a gentle activism and advocacy of inclusion. Each ‘action’ jostles patterns of expected behaviour in public places and asserts the public’s right to the streets and squares of their city.

With its total-immersion durational form, and that it took place along one of Manhattan’s busiest stretches of pavement, Hotel Empire allowed both the artists and those who encountered the art work to relinquish status and the social norms of public areas in several ways. The celebrated urban activist and New Yorker Jane Jacobs, who elaborated on the significance and importance of sidewalks as the sum of trivial incidents, advocated for an unplanned and messy vitality to such spaces in a similar way to Hotel Empire. With only the most essential of wooden furniture items, designed and handmade by the artists themselves, the stripped back aesthetic and open invitation of Hotel Empire to play, talk, and share food encouraged notoriously tough and unfriendly New Yorkers to stop and connect. “The ambition of the action is to share a common and very well-known everyday tool (the furniture and the living aspect) with everyone, without choosing [participants] or creating rules that exclude people. [The action is on the] street, in open air, 24-7, and free...” the artists comment. Intentionally the art work collapsed distinctions between performer and observer. Renauld comments: “We refuse the idea of an audience; we speak about inhabitants. The flow is a kind of city ballet: dense choreography, true intention, no makeup. We don’t know who the spectator is.”

The artists’ desire to speak of ‘common ground’ rather than public space is indicative of the shared intimacy that Hotel Empire : The New York Crossing seeks to generate. “Our work is based on collective memories and immateriality....we try to build communal emotion” Renauld and Boijeot explain, and perhaps the art work is best understood as a frame for memory-making processes, an activation of the community through engagement with the action. Renauld continues “The street is humanity’s first space for being together. If you just use it only to pass, you miss something about the first stone of civilisation. An open space, where you can have a conversation, is the most passive meaning of politics.” “There is not only public and private space; there is the intimate space of a conversation” Renauld reflected about the action. Psychologically and symbolically the simple wooden table acted as a unifying force in their action. “There are no classifications” Boijeot explained. “There are no rich people or poor people. You can speak freely at the table and we see that people go very quickly into a sort of intimacy. When we sit at the table sometimes we see that within only a few minutes we have such a deep relationship with one another, with private life stories coming out.” It is this third space - neither the public or the private, but the intimate - in which Hotel Empire : The New York Crossing has most impact as a public art work.

What does it mean to share public space, especially in one of the world’s most expensive and capitalist cities? The street is a space like no other. It offers a litmus of the social habits, mores and etiquette of our times, and continues to preoccupy sociologists exploring the ways that individuals relate to one another in public places. The street may be shaped by the state and market forces, but it is acquiescent to neither. Considering how Hotel Empire operates as a public art work begins to dig into the psychology of public space in general, and New York City in particular. As each action in the Crossings series undertaken by Renauld and Boijeot uncovers how the particular rules of proximity and intimacy function in each culture, and what the components for a psychologically healthy city may look like, Hotel Empire : The New York Crossing offers both a universality - in its provision for everyday needs and encouragement of connection and intimacy - and locally specific response. Unlike many art works in public spaces that intentionally engage with people or groups, Hotel Empire : The New York Crossing doesn’t seek to promote social-political change or permanent physical change in the areas the work passes through. Instead, Hotel Empire makes visible and holds the space, that’s to say reimagines space, reshaping rather than territorialising as it progresses. Hotel Empire : The New York Crossing understands and amplifies the street a key site where the contradictions and complexities of contemporary society are worked through, and where the possibilities for new forms of connection, intimacy and interaction in urban areas take shape. 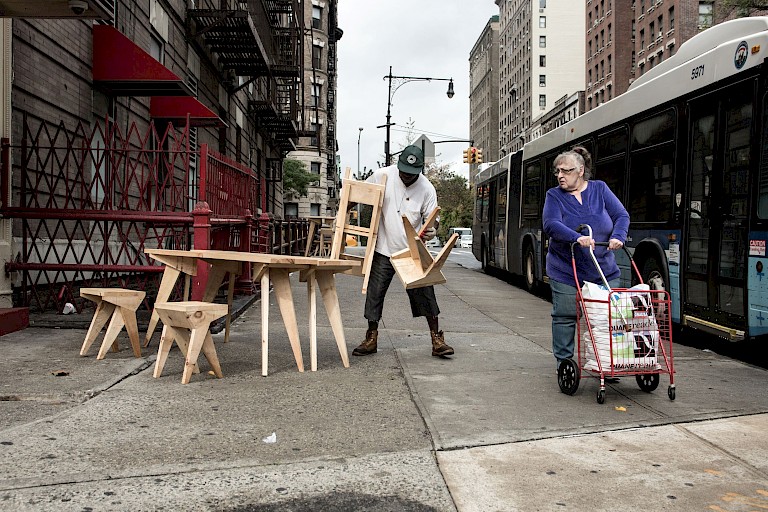 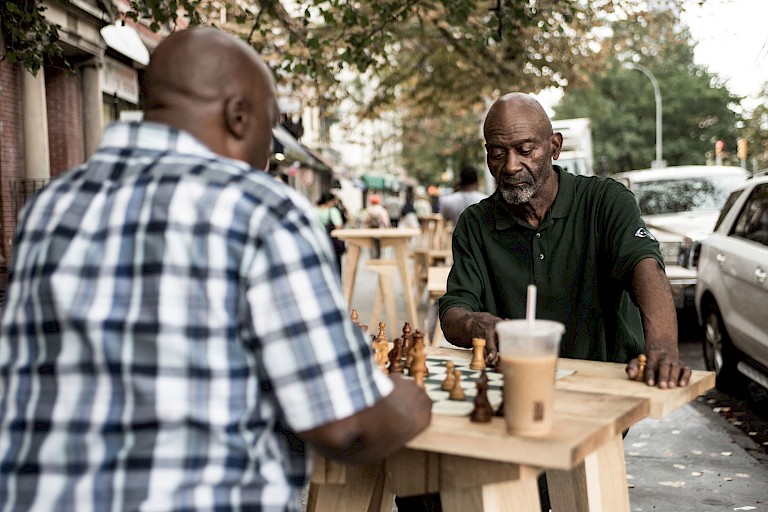 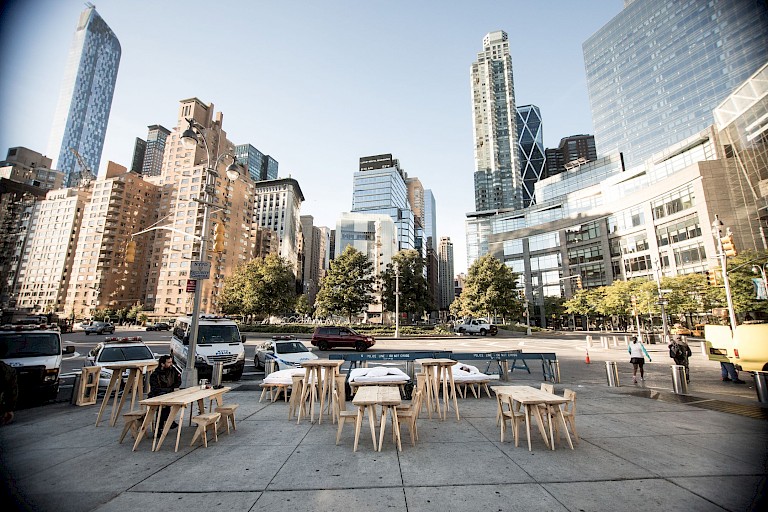 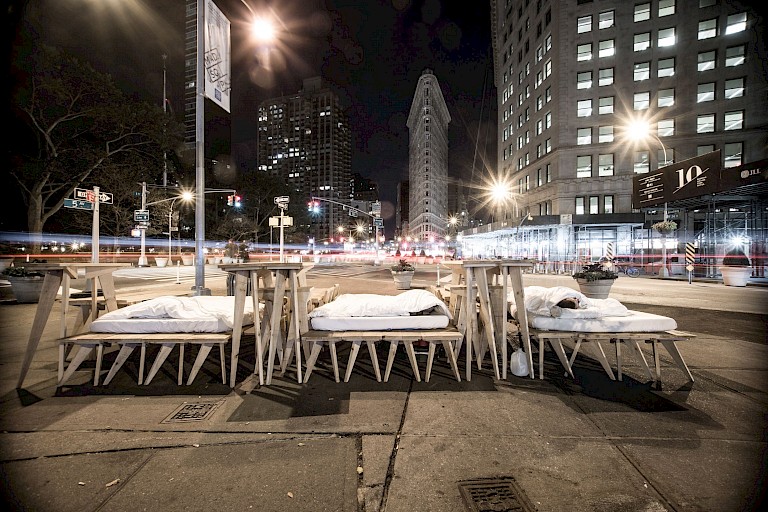 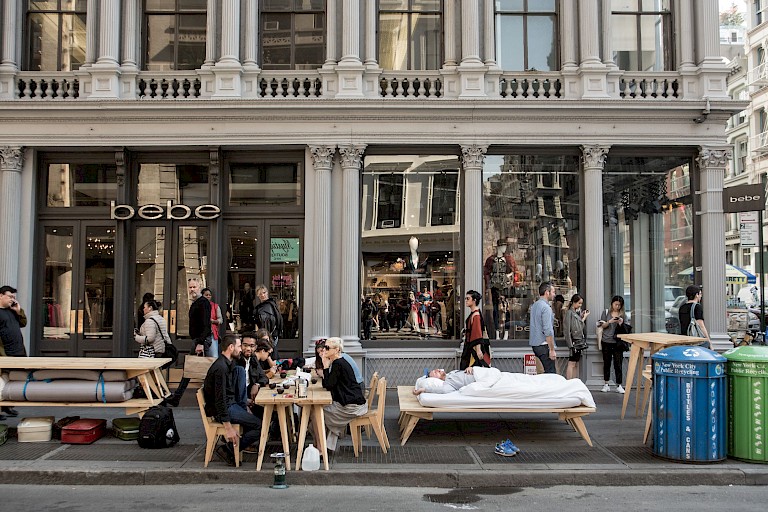