How Goes the Enemy

Valsan Koorma Kolleri is a Kerala-based sculptor who has turned his focus to working with natural material and creating partially ephemeral works (with palm leaves etc, which are left to naturally decompose within the work). His exhibition in the second Kochi Biennale (2014-15) seeks to communicate the philosophy behind his work with the audience.

Kolleri takes up the non-functional Cabral Yard, a remnant of Fort Kochi’s past as a Dutch trading outpost, and transforms it with multiple sculptures made of locally found material including laterite stone, mud and clay. Central to the arrangement is the sculpture at the entrance, responds uniquely to the sun, following the same principle as the sundial. The sculpture sits on a laterite base, with a small square water receptacle. A needle-like point emerges next to it, from which Kolleri suspends a human figure upside down. In the course of the biennale, Kerala’s constant rainfall and humidity will erode the laterite and the mud surfaces, and with this act of time the beauty of the installation will slowly emerge. 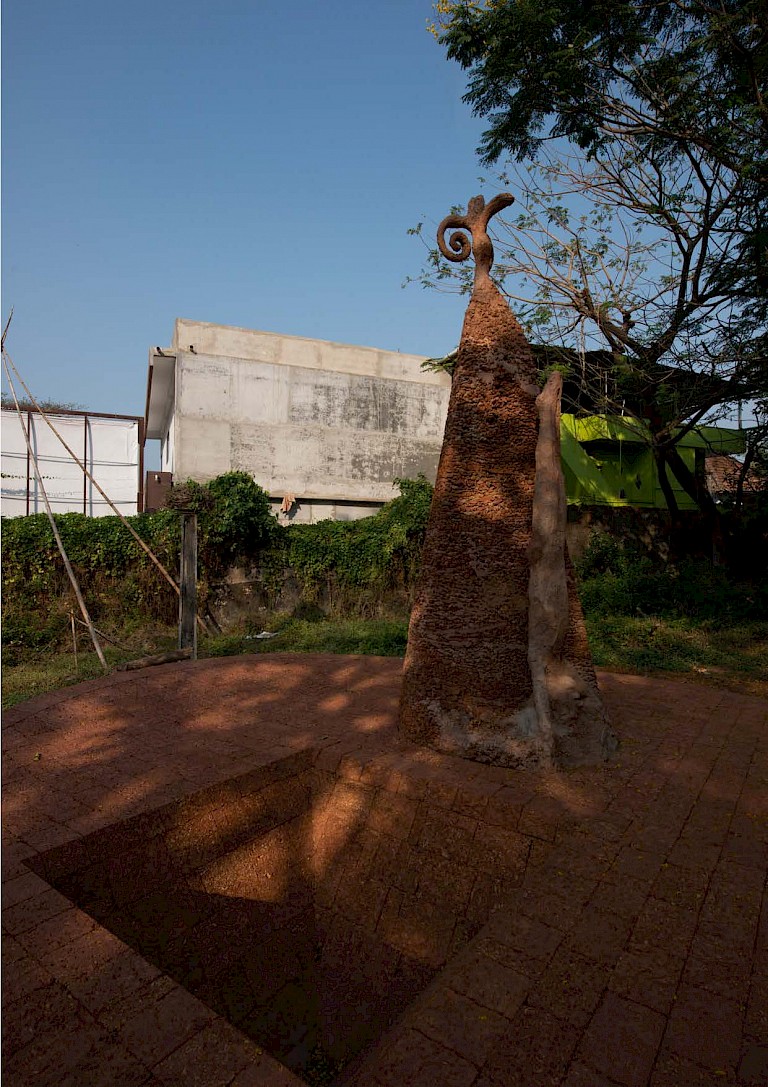 Kolleri's aim with this sculpture was to deliberate upon the passage of time, in context to a place such as Kochi. Over the centuries Kochi has been home or trading outpost to a number of international and local peoples. From the kings of Kerala to Jewish immigrants who set up home and temple just a few kilometres away from the sculpture site, to the Dutch who controlled the ports till the British took over, Kochi has seen numerous communities come and go, and leave behind remnants through food, architecture and habits. Like Kochi, the sculpture seeks to be a reminder of time, as well as the distillation of itself through the natural processes of erosion.

An additional aspect of the sculpture is the use of laterite and other natural materials in its construction. A rock-type found extensively in south and south-west India, laterite is iron-rich and red in colour. Known to be long-lasting under extreme weathering conditions, it was the stone of choice for house building in southern India. Even today states along the southern coast of India are dotted with red laterite buildings. Kolleri's use of the rock is not only a nod to the area's history but also an ecologically conscious decision as the production and use of laterite is less energy consuming and construction that uses laterite could avoid concrete, bricks and mortar to a large extent; thus offering possible ecologically sound solutions to its audience, while simultaneously inculcating a sense of pride in existing laterite structures which are recently losing out to apartment complexes, etc.

The Kochi Biennale is viewed by a very large local audience who, according to organisers and local bloggers, found the piece intriguing and thought provoking. The ecological concerns the piece brought up were considered in many local publications in both Malayalam (the vernacular language spoken in Kerala) and English, thus making it's impact felt.

Originally a shipyard, the Cabral yard was a space taken over by nature due to years of disuse. The Kochi Biennale Foundation commissioned Kolleri, an artist from Kerala itself, to restructure the space into a cultural hub through his practice. Kolleri fulfilled this tall order by creating multiple structures to resemble a small amphitheatre, along with a central sculpture. The sculpture is meant to show the decay of time. The space around it is now in use for workshops etc at the biennale, thus hitting the required mark.