The work was spread across three-day 29 November - 1 December 2012. Each day the audience would meet in a parking lot in Newton, a cultural precinct in the Central Business District of the City of Johannesburg. Each day was carefully structured around contrasting multiple sites across the city of Johannesburg. The routes connecting the sites were carefully chosen to draw attention to the landscape and built environment that everyday user of mini bus taxi’s and Gautrian see. The Gautrian is an exclusive express train that connects the city centre to the airport, which only move stops in wealthier neighbourhoods. Both experiences are vastly different but show the dramatic shift that every day commuters see and experience daily as the commute for home to work.

Day One took the invited audience through Fordsburg and Mayfair, both communities that deeply impacted by forced removals on the 1970’s under the Group Area Act of 1950 implemented by the Apartheid State. Then through Noordgesig, Diepsloot and Protea North, all neighbourhood in Soweto the largest former Township created under the group area act to house a large black labour force close to the city centre. The last stop was Lenasia a settlement for Indian and Muslim families forcible removed for area like Fordsburg and Mayfair. Day Two drove the audience through the Central Business District, Hillbrow and Yoeville, areas of the city that have been adversely affected by Economic flight in Post 1994 paranoia, brought about by the relaxing of the Pass Laws which created the space for people of colour and foreign national to reoccupy parts of the city that had been historically inaccessible. The performance happened in two homes one in Observatory and the other in Melville. These middleclass neighbourhoods straddle the edge of the city and the beginning of suburbia, drawing attention to these often-impenetrable thresholds that are define by class. Day Three took the audience with the Gautrain to Alexander, a former township on the edge of Sandton, the most expensive real estate in Johannesburg. Then the audience were driven back to Central Business District to End Street and Fox Street to an area of Johannesburg that was undergoing an intensive process of Culturally led gentrification.

The days each had a mixed set of performances that carefully located themselves in homes to subvert and challenge the binaries that the routes across the city set up. The performer develop works at two sites. A constant throughout the programme was Murray Kruger, who would wash the windows of the mini bus taxis at each stop. Kruger, a white middle-class male, was performing the task of assumed homeless men at traffic lights who did this to earn a minor wage of the day.

The programme started with a performance by the duo Common Sense — Dutch installation artist Stan Wannet and South Africa’s Leila Anderson, who were found lying on curb, as an alley momentarily broke into makeshift public space, as it disappeared into another row of densely packed zinc and wood structures. Residents of the area had already gathered to make sense of the scene as the invited audience manage their way from their arranged transport. At one end, Leila Anderson lay on stretcher with her face covered with an expressionless wax mask and at the other end Stan Wannet was lying face downs with his head covered in spilt pink tinted wax. The body surrounded by broken boiled eggs with an open medical cooler holding the rest of the eggs. The scene was perplexing for both audiences as one was uncertain if this was a scene of a crime or just a peculiar moment orchestrated to illicit a response or to create a moment for these two audience to interact and collectively make sense of what lay before them.

The last day was collaborative performance German performance artist Johannes Paul Raether and the Boemo babo ntate Bothata singers and dancers, who work as recyclers in the inner city. The recyclers were performing on the roof of their home, an illegally occupied building and an informal recycling depot on Fox street. The performance saw Raether mimicked the movement of the recyclers as they sung traditional Sesotho song of war and dance. Raether dressed is a form of drag was painted blue with blackened teeth. He wore red boots, a matching wig, knee pads and oversized red and blue sport top. This was contrasted against and black jeans and jackets of the recyclers. As the performance progressed their movements synchronised, the singing and dancing now seemed gentler and Raether become part the space as the materiality and colour seem to hold him as he joined the recyclers.

Image Credits: Lungelo Mbulwana courtesy of the Goethe Institute JHB for the In House Project 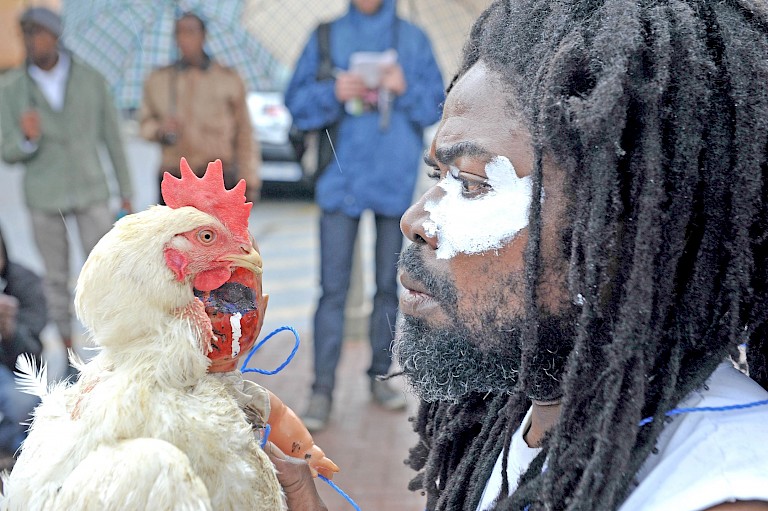 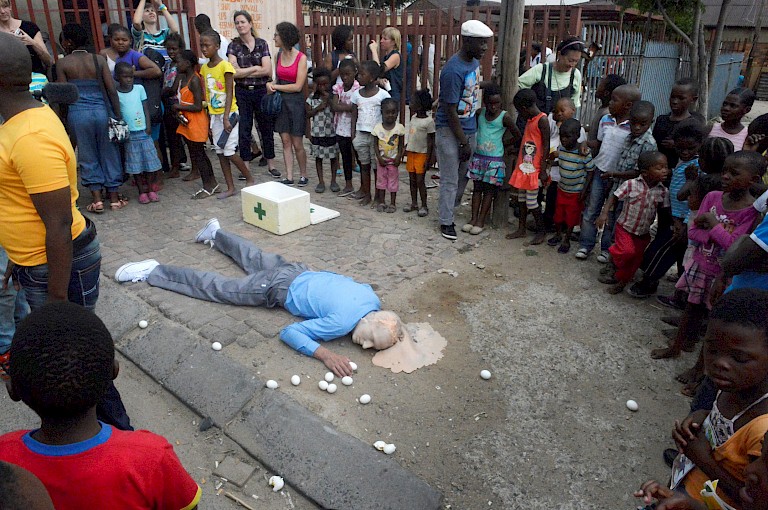 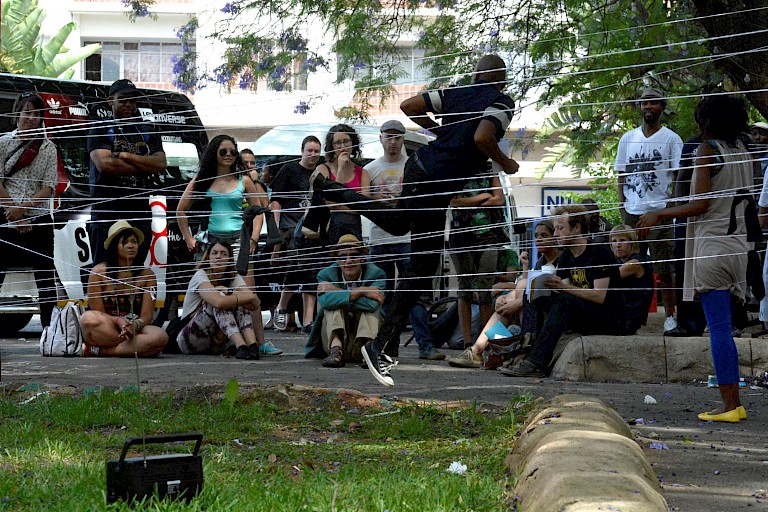