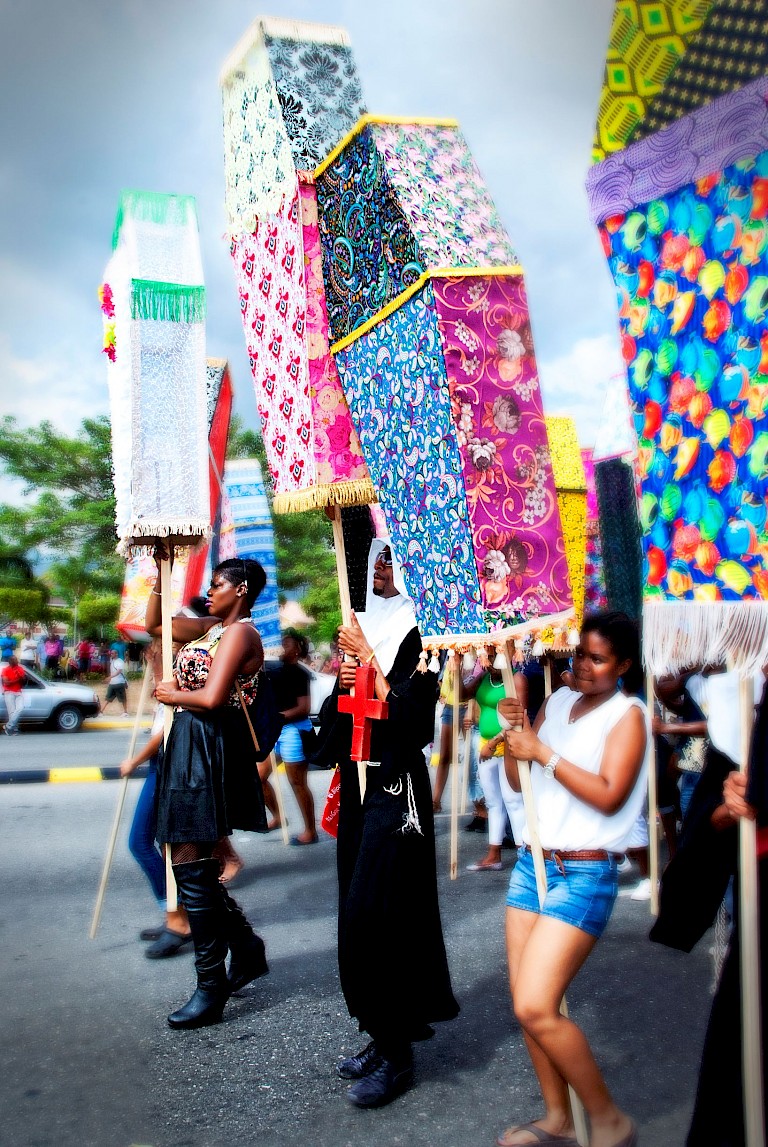 «Invisible Presence: Bling Memories» was delivered within En Mas’, a programme for which curators Claire Tancons and Krista Thompson commissioned nine contemporary artists, all with roots to Caribbean tradition, to each stage a performance at a different location during Carnival season in 2014. The title of the project is a pun on “Mas”, short for masquerade and synonymous with carnival in the English-speaking Caribbean. As the curators put it, «En Mas’ considers a history of performance that does not take place on the stage or in the gallery but rather in the streets, addressing not the few but the many. [...] EN MAS’ takes into account performance practices that do not trace their genealogy to the European avant-gardes of the early twentieth century but rather to the experiences of slavery and colonialism through to the mid-nineteenth century, the independence struggles and civil right movements of the mid-twentieth century and population migrations to and from the former colonial centers for most of the last century».

The performances took place across eight cities in six different countries — Dominican Republic, Trinidad and Tobago, Martinique, Jamaica, the Bahamas, and the US. Later, in 2015, the project was presented as an exhibition «En Mas’: Carnival and Performance Art of the Caribbean» at Contemporary Arts Center in New Orleans, co-produced with Independent Curators International (ICI), New York. Ebony G. Patterson's performance, featuring 50 uniquely embellished coffins, was held in Kingston on plastic flowers. The vivid collage of colors, surface patterns, and textures captured the assemblage aesthetic of Caribbean festival traditions whereby multiple materials and objects are layered into a single costume, their aesthetic of «high-affect» allowing for maximum visual impact. Yet this troupe of revelers was of another order, demanding a different kind of attention from the rest of the carnival parade.

Their performance was not just an act of celebration; it was also a form of protest and commemoration». The work derives from the so-called «bling funerals» popular among Jamaican urban working class — these processions involve abundant decorations, status symbols and overall visual excess aimed at constructing prestige and gaining maximum visibility, which Ebony G. Patterson reads as «one of the most powerful declarations of individuality: You may not have noticed me when I was alive, but you will damn well see me as I leave» . Since the island’s Carnival is considered to be an affair for middle and upper class residents, who can afford the cost of the ticket and costumes, the artist strived to address the social divides by asserting «a moment of presence for those who may not otherwise have agency to do so themselves». Thus, the participatory performance «sought to interrupt the space of the visible with that of the invisible» .

It is important to note that «Invisible Presence: Bling Memories» has links to earlier projects by Patterson that similarly brought together Afro-Jamaican ritual traditions and powerful social commentary. In 2011, in Trinidad, she staged a performance titled «9 of 2019», for which she brought nine decorative coffins to a busy street where murder statistics were being read aloud. Another work, «Of 72», referenced the over seventy people (the actual number is disputed) who died or disappeared after the police and military went into the economically depressed community of Tivoli Gardens in 2010 to arrest Christopher “Dudus” Coke, the reputed don of the West Kingston area.

In addition to giving space and visibility to the absent and marginalized bodies through art, Ebony Patterson is making another significant step: she is talking about death in a way that does not imply any fear of death, and, through reappropriation of traditional Jamaican attributes of death, reveals an affirmative flow of playful vitality. The title of the performance contains the very ideas that feed into this flow: the constant transition between visibility and invisibility, presence and absence, the blinding brightness of «bling» and the illuminating murkiness of memories. The artist recycles the ritual and creates a new one that overwrites existing repressive hierarchies and politics of representation — which makes it interesting to explore in a broader sense the ways public art can be ritualistic, not only working with ceremonies and rites as an ethnographer would, but literally letting them be part of an artistic practice, and the ways an artist may 6 Petrina Dacres, «The Poetics of Death and Visibility: Introducing Ebony G. Patterson’s Invisible Presence: Bling Memories» in En Mas’: (Carnival and Performance Art of the Caribbean; edited by Claire Tancons and Krista Thompson, Independent Curators International (ICI), New York / Contemporary Arts Center, New Orleans (CAC), 2015. — p. 145.) learn from the context they address, in a truly decolonizing manner.

Moreover, certain forms of art in public space can be viewed as a new ritual in their own right. All things considered, «Invisible Presence: Bling Memories» is a work that makes a strong aesthetic statement, while addressing important socio-economic issues of Jamaica. In spite of its short duration, it had high visibility and high public potency, involving local volunteers from different professional spheres and having an important connection with the cultural experiences of the audience. The performance continues to live in new formats, its documentation, alongside the embellished coffins that were used in the parade, being presented at institutional exhibitions. 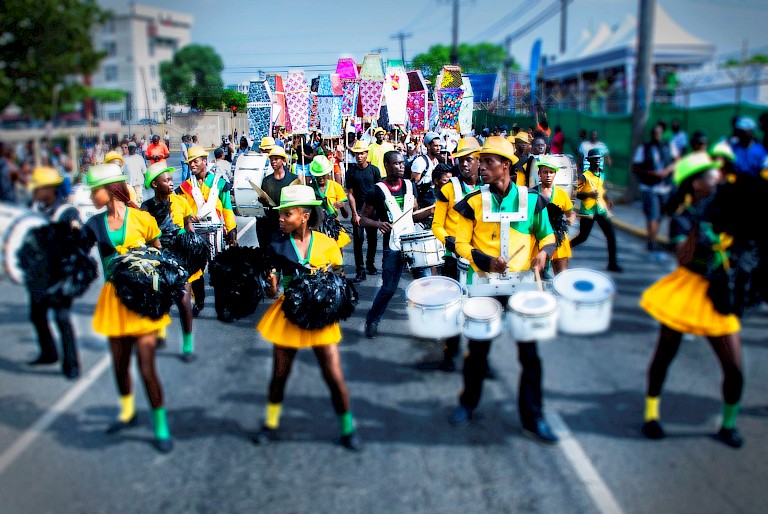 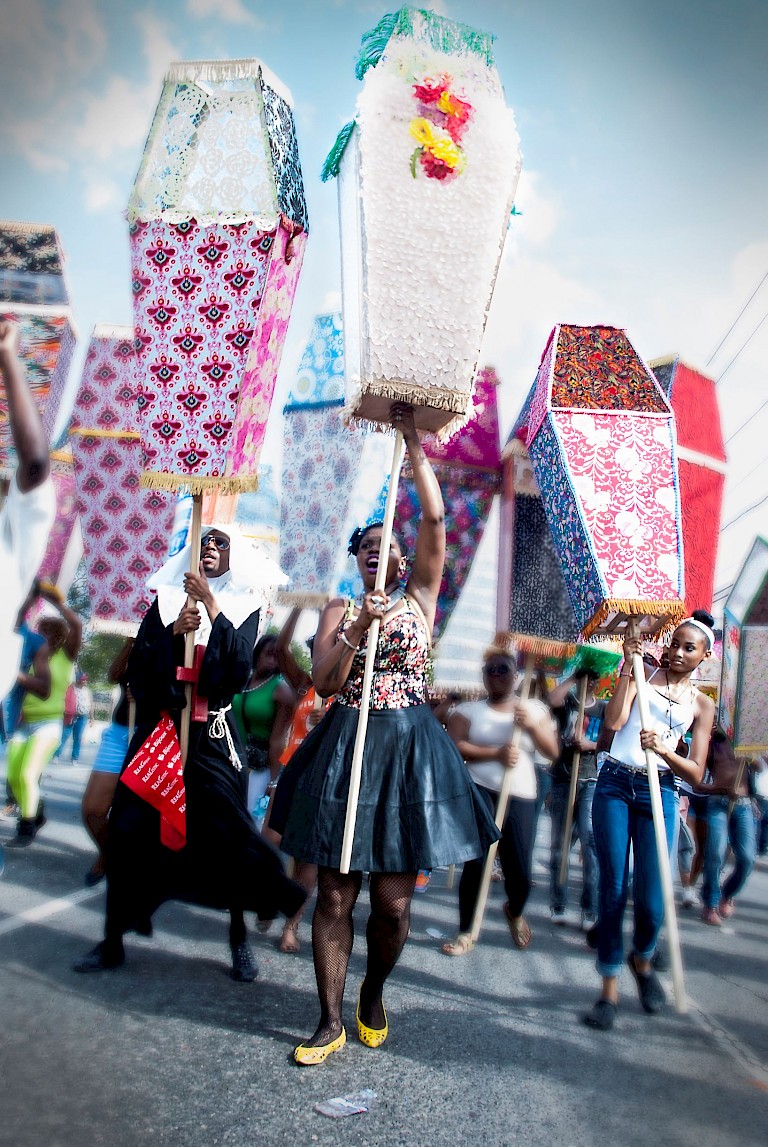 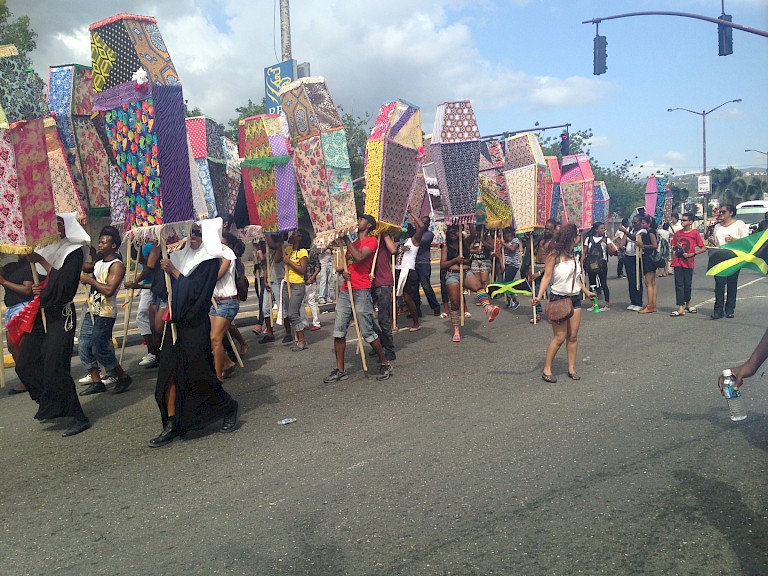 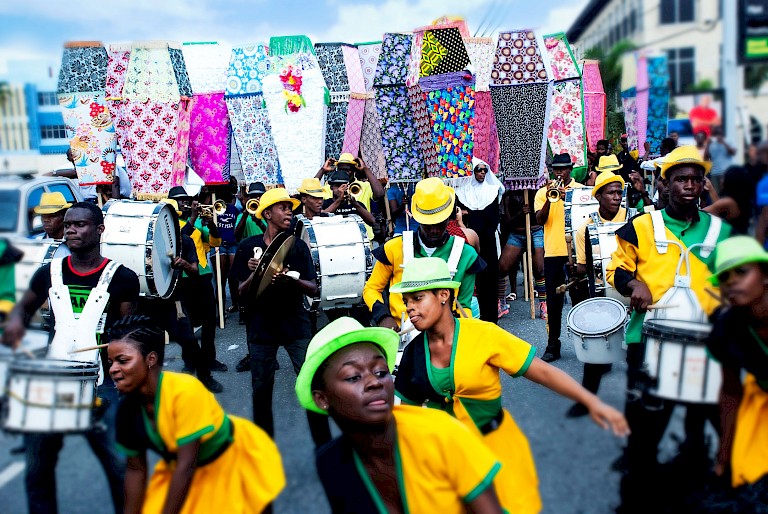 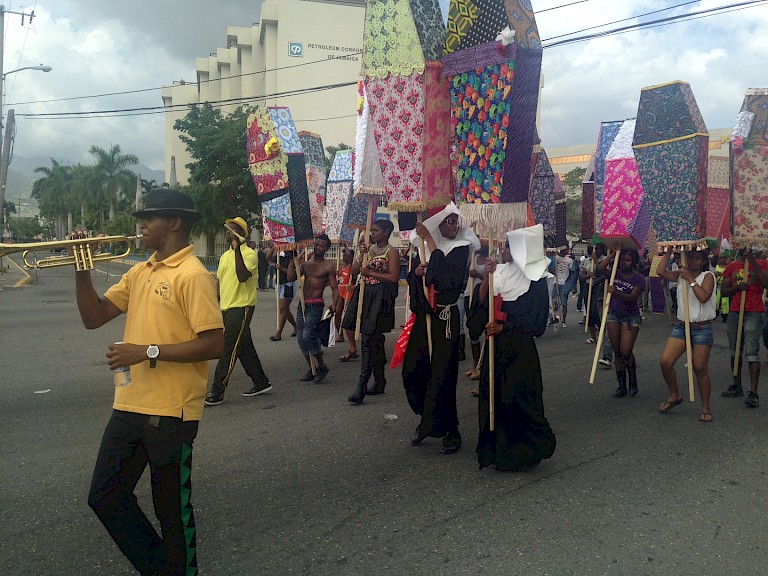 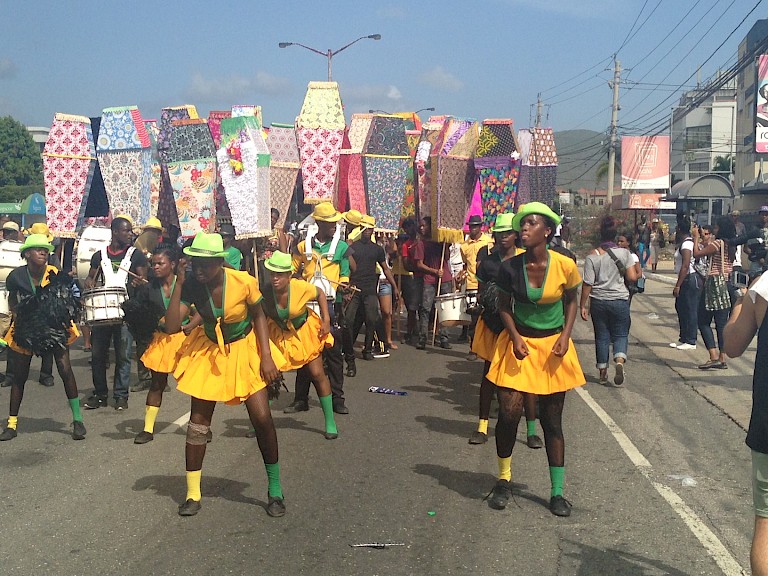 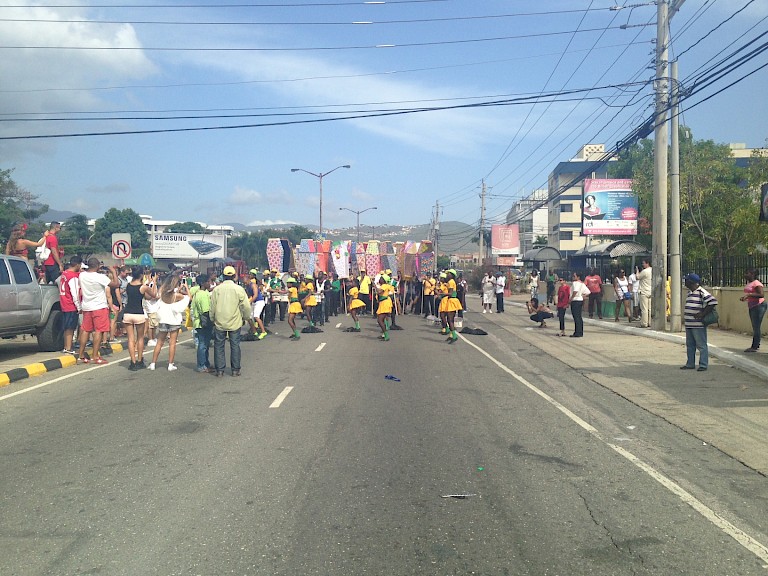