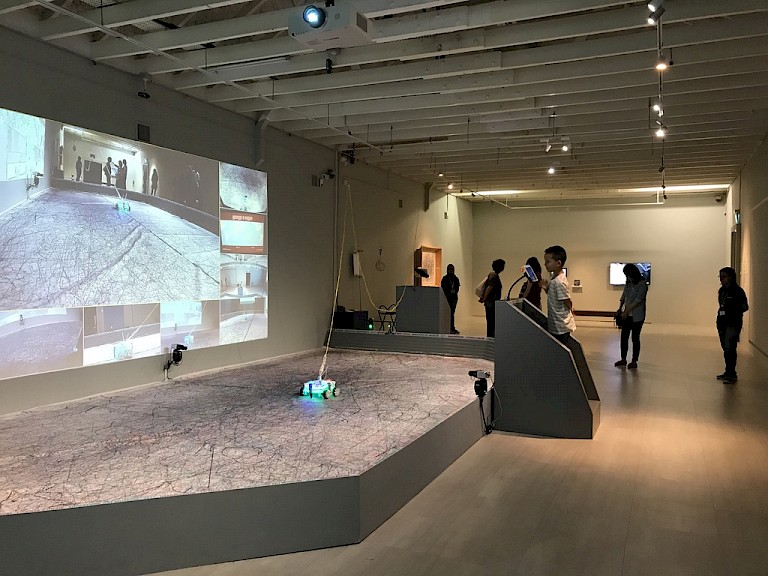 Undergirding UuDam Tran Nguyen’s LICENSE 2 DRAW is distance-controlled technology and our ability today to control anything from anywhere in the world. Consistent in the work’s various iterations is a LED-lit robotic drawing machine that holds and drags four markers across a sprawling canvas, and is equipped with six cross-hair lasers that beam red laser light in the exhibition space. Users—both physical and remote—on the L2D mobile application control the movements of the drawing machine. While those in the gallery see the impacts of their actions unfold in real life, others not physically with the work can see their drawing in real-time by Skype calling the user License 2 Draw. It is through this process enabled by technological connectivity that a new kind of drawing is made by the public from all over the world. LICENSE 2 DRAW thus reflects on how we connect, communicate, interact and negotiate digital and physical space in the age of the Internet, especially as the boundaries between virtual and corporeal become increasingly blurred.

LICENSE 2 DRAW was designed around the idea that we can control anything remotely from anywhere in the world with one simple 'click'. Consistent in the various iterations of LICENSE 2 DRAW is a LED-lit robotic drawing machine that holds and drags four markers across a sprawling canvas. This drawing device controlled by users—both physical and remote—on the L2D mobile application utilise technology and communication networks to shed light on a new model of collaboration that is made possible through the in. Users not physically

in the gallery space can also see the marks they have created in real-time by Skype calling the user License 2 Draw. In each exhibition of LICENSE 2 DRAW, the digital interactive and collaborative drawing is made accessible for 24 hours each day.

Lying at the intersections of art, technology and the participatory,LICENSE 2 DRAWis a work that reflects how the internet have vastly altered the public sphere beyond the physical to include the digital realm, shaping the ways we access information and altering the possibilities of participating, creating and communicating. However, in tandem with the conveniences that the digital age has presented, it is unsurprising that a dark circuitry lies beneath. Utilising crayons, markers, laser beams and a low-tech, high-tech aesthetic, the drawing robot in LICENSE 2 DRAW is innocuously connected with distance-controlled technology in contemporary warfare. Tran conceived of LICENSE 2 DRAW after watching a series of clips that showcased remote weapon systems applied in the wars in Yemen and Afghanistan by the United States in 2010. As the artist has stated, “License 2 Draw started with my uneasiness with the drone war that America was carrying out in several parts of the world. This is a new type of warfare which allows soldiers to command flying drones to kill enemies while the solider is safe at home, thousands of kilometres from the battle field. Upon knowing that, I thought that if one can do such a destructive thing so remotely, can we artists do something similar in a different way, a more creative way?”

Realised in collaboration with professionals with expertise in computer software, hardware and server technology, LICENSE 2 DRAW was first presented at Koganecho Bazaar in 2014. Held annually since 2008, the art festival in Yokohama is organised by the Koganecho Area Management Center together with the Hatsunecho- Koganecho and the Hinodecho Environmental Cleanup Association as an ongoing effort towards community renovation of the Koganecho area. By utilising the city's everyday spaces as sites for exhibitions including studios under the railway bridge, small buildings, existing shops and empty lots, the festival aims to revitalise the Koganecho area, situate Yokohama as an important cultural hub in Asia and explore the connections between community and art. In alignment with the festival's use of revitalising such spaces, LICENSE 2 DRAW was situated in the site of two adjoining small brothels. The expansive space required for the installation was created by removing the wall which separated the two smaller brothers, which allowed the artist much freedom to further adapt the space to the installation.

UuDam Tran Nguyen works across video, performance, photography, sculpture and new media. In his practice he often draws on urban myths and popular legend to explore social concerns as well as the role and impact of human progress on rural and urban spaces in contemporary Vietnam and Southeast Asia. Alongside his artistic practice, he is also co-founder of the experimental art magazine XEM. Nguyen’s works have been presented at exhibitions including TIME BOOMERANG California Edition – From S.E.A. Sea Atolls to the Next Dead Stars, Orange County Museum of Art, Santa Ana, United States (2019); Bodies of Water: 12th Shanghai Biennale, Power Station of Art, China (2019) and Sunshower: Contemporary Art from Southeast Asia 1980s to Now, Mori Art Museum and The National Art Center, Tokyo, Japan (2017). He is also a recipient of the Jury Selection Prize at the 18th Japan Media Arts Festival (2015).

In each iteration of LICENSE 2 DRAW, Nguyen has further developed the robot drawing machine or added new facets to the installation. At Koganecho Bazaar, three sculptural works—One Target, Two Targets, and 3 Targets: I wanna take care of your Zen Garden could also be controlled by the LICENSE 2 DRAW app. Each time a LICENSE 2 DRAW user pressed a button on their smartphones, it would send a signal to a cloud server in Singapore that would then direct the signal to mechanical arms holding crayons or plastic brushes that drew circles on wood, plexiglass or sand. Each sculpture was accompanied by an IP camera that allowed viewers to see their actions from afar. The exhibition at Factory Contemporary Art Center, Ho Chi Minh City in 2016 included the SAIGON EVOLUTION 2 robot that incorporated laser crosshair in the drawing robot. For this exhibition in Vietnam, Nguyen also created the License 2 Draw: Laser Target Shooting where users of the L2D mobile application can shoot laser beams at the surface of a paper target. The laser beams would either burn holes in the paper or by chance light a match and burn the whole sheet. For APT8 kids as part of the 8th Asia

Pacific Triennale of Contemporary Art, Nguyen created the multimedia activity Draw 2 Connect with License 2 Draw, which has been made available on the Gallery’s website. Reminiscent to a video game, users can access a programme online to draw and interact with other players around the world.

Integral to LICENSE 2 DRAW is that remote users would be able to view the developments of their drawings. Speaking in the context of the LICENSE 2 DRAW installation at the Singapore Art Museum, Nguyen shares the use of numerous Bosch CCTV cameras to track each move of the LICENSE 2 DRAW robot. As access is required throughout the day for four months, Bosch Starlight super light-sensitive cameras played a pivotal role in allowing remote audiences to experience the drawing and movement of the robot for a multitude of perspectives and their ability to record fast-moving objects precisely, and even in low lighting conditions. LICENSE 2 DRAW at the Singapore Art Museum marked the second collaboration between the artist and Bosch. The first of which was for LICENSE 2 DRAW in the exhibition Undefined Boundaries at Heritage Space in Hanoi, Vietnam.

Shown in the context of art festivals and exhibitions, Nguyen’s development of LICENSE 2 DRAW has been supported by institutional organisations. Backgrounding the work’s success is a group of software, hardware and server engineers as well as two graphic designers. Collaboration with individuals working across various fields is integral in managing the complex technologies that make it possible for a smartphone to control and access a seven kilogram drawing robot from anywhere in the world, lasers as well as mechanical arms; as well as design the interface for the mobile application which was available for free on Google Play Store and Apple iTunes Store.

variety of issues. The artist took as a starting point the duplicitous aspects of drone technology in remote warfare to instead devise a creative space in LICENSE 2 DRAW. The work creates an opportunity for its global network of users to gather and create something physical in a space. Being able to view the drawing machine in real-time as it executed lines on the canvas or move and alter sculptures demonstrates the internet's ability to instantly connect people. The work transcends borders and boundaries, and during the presentation of LICENSE 2 DRAWat Singapore Art Museum in 2017, it was recorded that at one moment, there were a total of 221 current players on the application across Vietnam and Singapore and a total of more than 3700 users.

In addition to drones and remote-controlled systems, the oblique associations between military and technology developments that background the work are fascinating. The work makes apparent the ways technologies have often been developed by the military and later find their way into civilian life. For example, the digital camera and microwave technology have become commonplace everyday objects that have granted great convenience in everyday life. Similarly, the internet was initially developed for military purposes by the United States to maintain its nearly 800 bases in more than 70 countries. Likewise, the once controversial drones connected with espionage, surveillance and intelligence gathering are now available commercially and often used for a variety of personal and hobby usage.

While iterations of the work were conceived and presented before the Covid-19 pandemic, LICENSE 2 DRAW gains added significance in a time when digital spheres have gained tremendous importance in our lives. As screens and the internet increasingly mediate the ways we live, work and community,LICENSE 2 DRAW makes visible the connections linking a click of a button and its physical impacts, which are often rendered invisible.

Moreover in 2014, Nguyen received the Jury Selection Prize for LICENSE 2 DRAW in the 18th Japan Media Arts Festival out of a total of 1,877 entries in its category demonstrating the artist’s innovative use of technology and media arts.

LICENSE 2 DRAWalso embodies a universal and educational appeal. Its relevance to comprehending the complexity of the internet has led to its inclusion in numerous exhibitions for young audiences and their families to explore contemporary art and ideas. These include a multimedia activity for APT8 Kids as part of the 8th Asia Pacific Triennial of Contemporary Art in Brisbane, Australia (2016) and Imaginarium: To the Ends of the Earth at the Singapore Art Museum (2017). 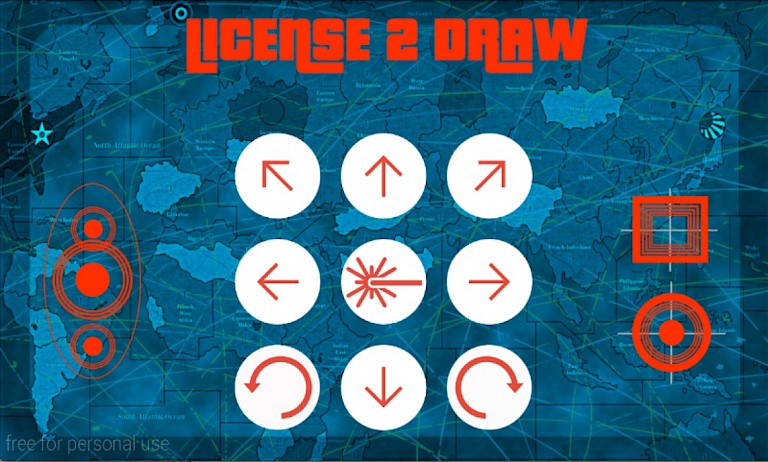