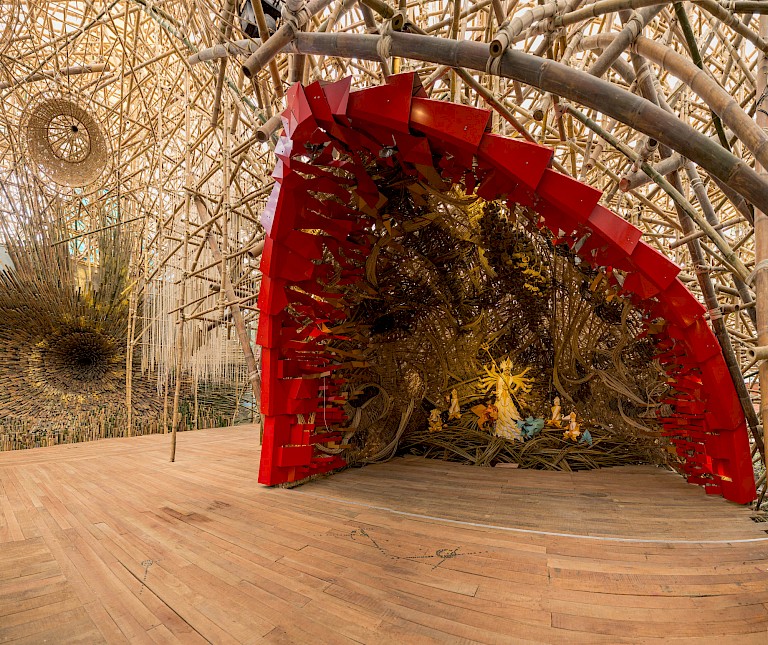 Loy is a Durga Puja Pandal (a tent for housing the deity of the Hindu Goddess Durga during the 2 week long festival celebrations) commissioned by Arjunpur Amra Sabai Club, Kolkata in 2019. It is built on the streets and is open of for all- worshippers and tourists, believers and the non-believers, alike. The installation was a bamboo, cane, cloth and rope structure embedded with an interactive electronic and acoustic system. It was made in collaboration with Ashhar Farooqui, Anpu Varkey, Harry Samson, Hoang Quyet, Shantanu Heisnam, Nadeem Waqif, Pradeep Patra and Khokon Da and his team of bamboo and cane craftsmen. 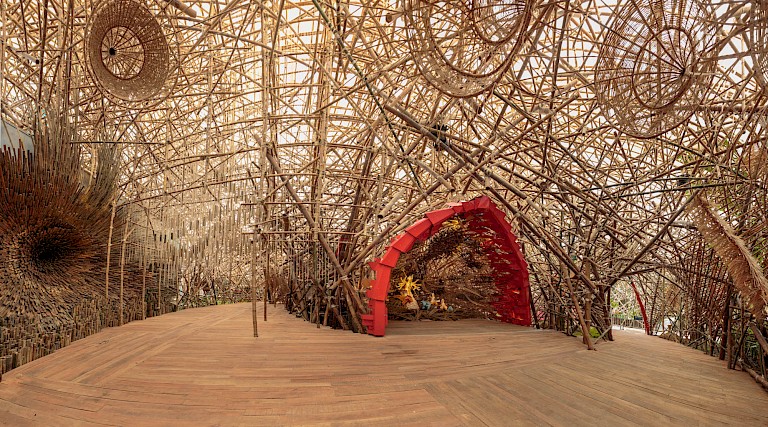 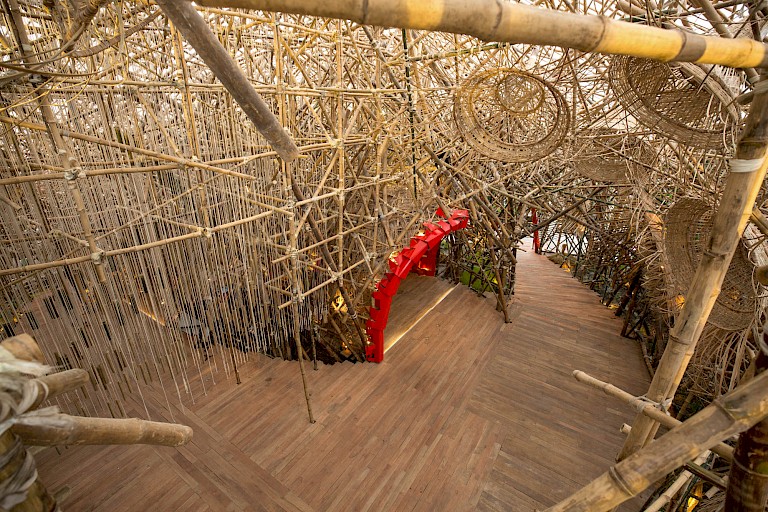 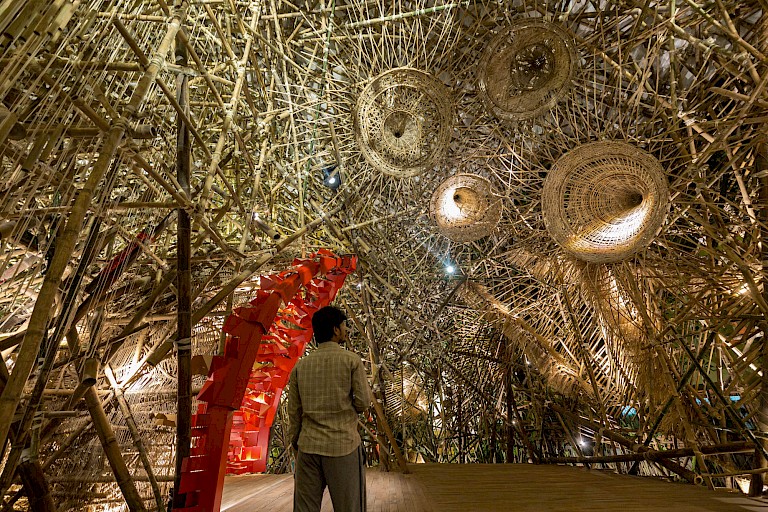 Durga Puja has a history of about 300-400 years but has become prominent during the last century or so. The large Puja was usually done by big landlords, and the entire rural community around, based around that landlord helped to make the pavilion with the centrepiece of a constellation of idols.

But in Kolkata in the last 30 years this has transformed into more and more stylized pavillions. Sometimes going really bizarre where there is no goddess. The theme can even be some socially relevant issue of that time, leading to interesting forms of abstraction in the way the pavilion was made.

This particular neighborhood is somewhat low-income and middle-income in North Kolkata, which is not well known for theme Pujas. There was an amazing and energetic person called Tamal Dutta who was in charge of the Puja committee of this resident association, who had so much appetite for risk. Initially, Asim asked him what he wanted for this project, and he said, “Primarily, I just want people to come and not want to go away and I have to throw them out”, that was his main goal. So it's about creating a spectacle and attracting people in that sense. But sometimes the spectacle itself becomes the aim, which can be counterproductive. This resident association was very interested in sustainability as a theme, and because that is something Asim has been working with for many years, it was easy for them to find common ground.

Asim invited an architect, Shantanu Heisnam, to be his right hand man on the project, and they did open-ended research, looking at what traditionally is done with Puja, meeting different Puja designers, looking at different craft forms like boat building, and cane and bamboo craft. Asim was quite keen to use bamboo. Although bamboo has been used extensively in the Durga Puja pavilion, but more often than not that bamboo is hidden and covered with decoration and fabric. Asim wanted to use the material in its raw form.

In his studio in Delhi, Shantanu and Asim developed different kinds of methods trying to understand volumes, densities, what kind of form they wanted to achieve. Trying to find materials to scale and work with that. At the same time, Asim also started working with an electronics engineer and a sound designer. He has been embedding interactive systems in immersive spaces in other projects as well, and usually his audioscapes are more frequency base and noise. But for the Puja, because it's such a public and popular festival, Asim felt that they need to be more musical.

With the help of the sound designer and the engineer, they were trying to see how electronic components can make the sound musical. Initially working with very basic hand soldered stuff on general PCBs, but then moving to more and more well-defined iterations of the PCB.

At one point, Asim also got into planting. Most of the craftsmen were taking a break and going home to plant paddy and other crops while this construction was going on. So Asim asked them to get some seeds back. They started planting rice and vegetables. Then they got a reference of the Nav Patrika Puja, which is a part of the Durga Puja where nine leaves are part of the ritual. They tried to incorporate these plants, like lotus and banana into the pavilion itself. And then because they had lotus, they had to have pond, and then there were mosquitoes, so they put fish. So it was quite complex sort of system. They also tried growing some mushrooms.

Asim did not want to make the idol (of Goddess Durga) himself, because he didn't have much experience with human and animal forms. So he collaborated with a self-taught origami artist from Vietnam called Hoang Quyet, who came two times over the project to actually research and then design and make these idols. All the paper was sourced from local handmade paper manufacturer in Kolkata. Asim also asked a mural artist, Anpu Varkey to incorporate some imagery from the Legends of the Durga Puja into the architecture forms.

At one level Asim was trying to take techniques from small craft objects, but change them into very large scale architecture forms. Loy is an amalgamation of the efforts and lived experiences of Asim, Shantanu, artists, bamboo and cane craftsmen, the members of the local residents’ association and the visitors of the Pandal. It was a collaboration between the fields of art, architecture, craft, horticulture and technology.