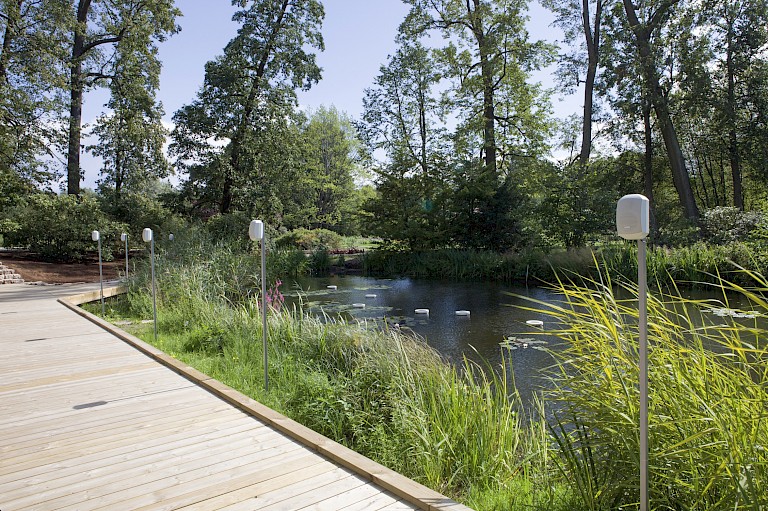 Pond Battery video visualises the electrical energy generated by MFC (Microbial Fuel Cell) in outdoor conditions during seven month time period. “The work is a part of the Biotricity series, an ongoing art and science research project, exploring dynamics of local ecosystems for envisioning the renewable future networks. Electricity generation process was interpreted into live sound and image structures, providing an aesthetic perspective on the interaction between nature and technology, ecological systems and electronic networks, human and micro-worlds.

Pond Battery contributed to the global debate in public art with the overcoming of the separation of an indoor and outdoor public space, since bacteria live and fluctuate in geological strata, in a public square as like as in our body. The projects contributed to the widest understanding of the differences between cultural and natural time. The variations produced by biodiversity that Pond Battery detected, sonified and visualized throughout Europe can be considered as an important step towards the widest consciousness about the intelligence of nature. Finally, the long-term impact of this project lies also in the contribution it gives to the current debate about art as scientific research. 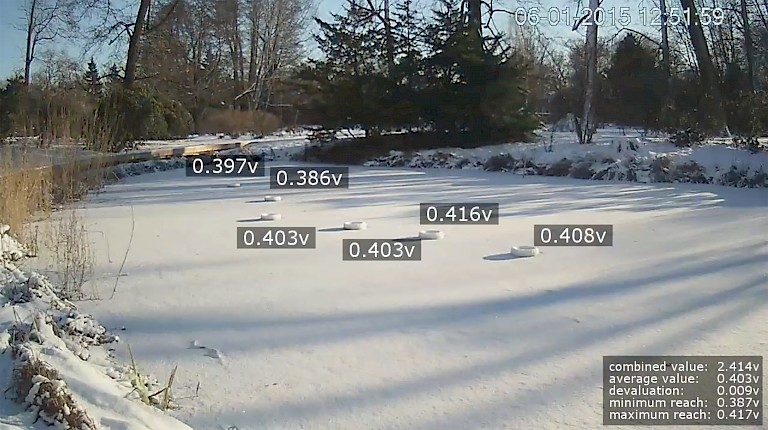 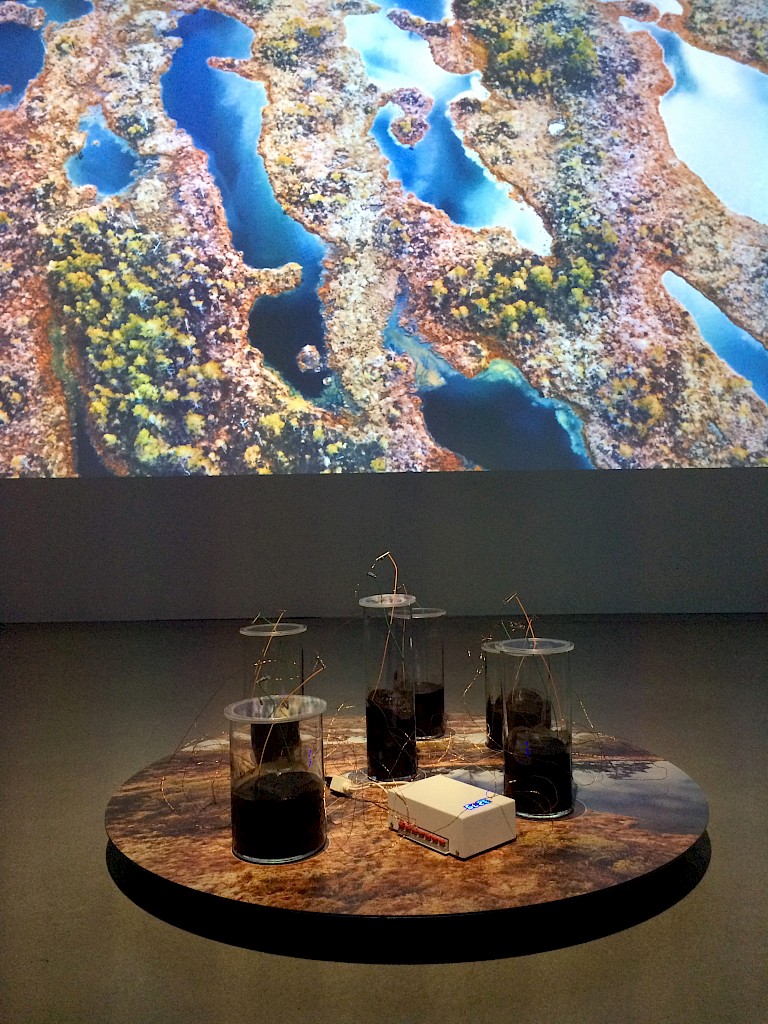 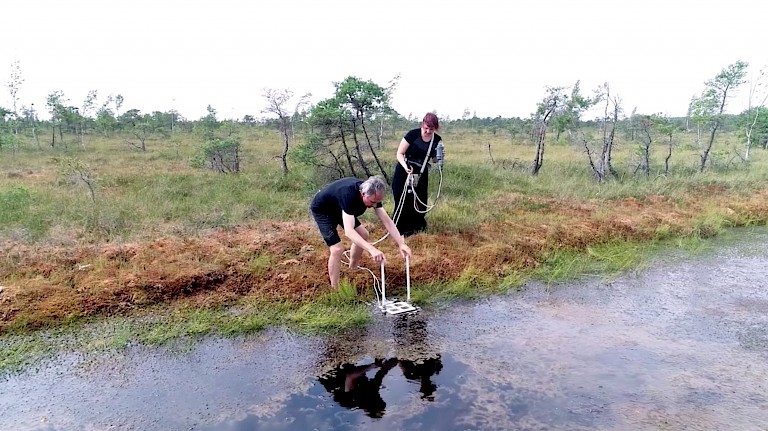 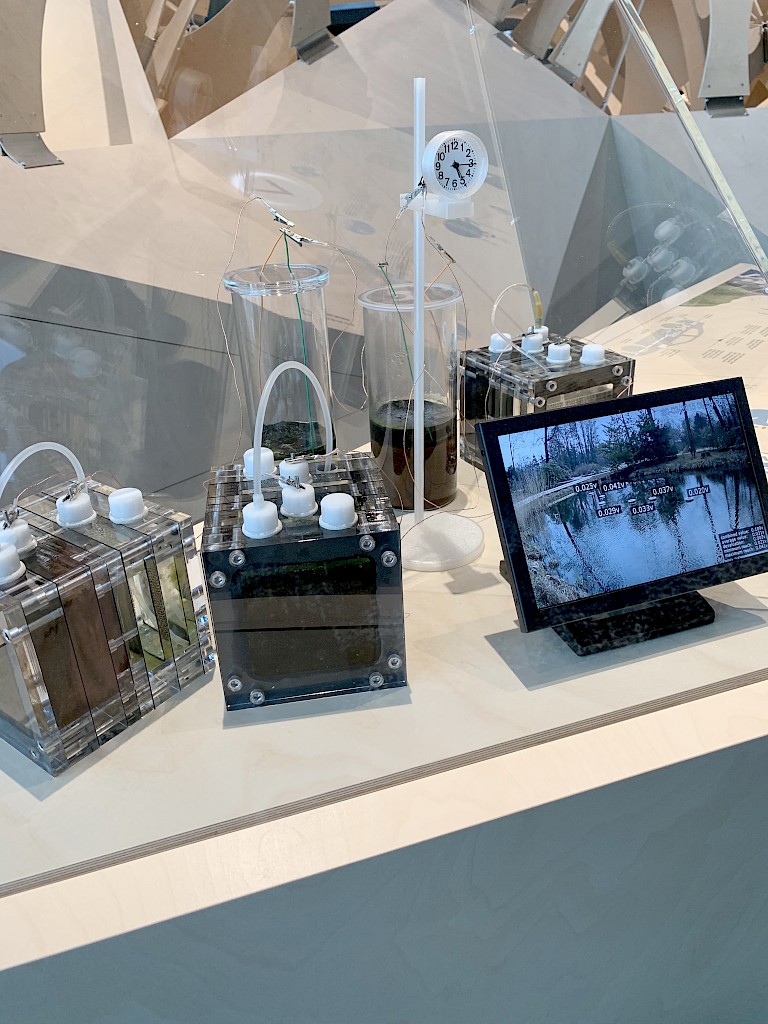 Since its foundation in the XIX century, Riga has played a significant role in the cultural, scientific, industrial and educational development of the Baltic region, being a big harbour city and exchange place for Western and Eastern civilizations. According to UNESCO, until World War I, the Riga Polytechnic was the only higher architecture educational institution in the Baltic States.

In line with the city’s tradition of innovation, in the 1990s artists and researchers Rasa Šmite and Raitis Šmits started working on the relationship between art and new technologies. At the time, Documenta 8 in Kassel exhibited also acoustic art, and the sign by Barbara Kruger warned on the risk of the extinction of the human species into artistic play. In 1996, together with artist and researcher Jaanis Garancs, they founded the Electronic arts and media centre E-lab (today the Center for New Media Culture RIXC). At RIXC artists organize the annual International new media culture festivals Art and Communication and publish Acoustic Space, a peer-reviewed international journal for transdisciplinary research on art, science, technology and society published by RIXC in collaboration with Art Research Laboratory of Liepaja University, whose first issue published in 1998 introduced projects and experiments about internet radio in acoustic cyberspace.

In 2013, in the frame of the exhibition entitled Project Genesis - Synthetic Biology 4 organized by Ars Electronica, the largest international cultural, educational and scientific institute active in new media art, Rasa Šmite and Raitis Šmits, in collaboration with artist Voldemars Johansons, presented the Biotricity series (2012). Pond Battery. A Poetics of Green Energy, is one of the outstanding outcomes of the Biotricity series.

Pond Battery is, in its turn, a project composed by different actions, mediums and spaces, evolving in further forms and outcomes: the installation of little objects-sensors on the surface of the botanical garden’s pond in Riga, a time lapse video of 10 minutes which “visualises the electrical energy generated by MFC (Microbial Fuel Cell) in outdoor conditions during seven month time period from September 2014 to March 2015; and a time lapse video, complemented by a sound composition which interpret recorded internet camera images and data from the fuel cell monitoring during the seven month long observation period, as artists describe.

Produced in collaboration with artists, scientific researchers, expert of sonification and data visualization, and with The Solid State Physics Institute of Latvian University, the following versions of Pond Battery resulted by the installation of the sensors in other European countries such as Lithuania, Denmark, Slovenia, Sweden, Belgium, Germany and Spain, composing what we might call “a critical energy cartography”, recalling, in a way, the Riga’s important role of place for exchange and trade with central and Eastern Europe between the XIII and the XV century as a major centre of the ancient Hanseatic League.

The long-term impact of this project lies also in the contribution it gives to the current debate about art as scientific research. Indeed, considering an art practice as research means fundamentally “to demand the artist-researcher to be able to demonstrate a set of results that can be generalized and therefore separable from his practical experience, which, accompanying the work in an abstract form, will demonstrate their originality, will place it in the appropriate context and will make it useful to the scientific community” (Athanassopoulos, 2016) 12 . In these terms, Pond Battery is an emblematic project, since it succeeded on different levels: it improved the aesthetics of unpredictability which depends on the constant variations of the microbial fluctuations and the technologies made up to detect and translate them for human senses; it created an interspecies language to detect a form of “critical energy”; it created a technology which can be engineered to empower the potential of the energy derived from the bacteria fluctuation and to use it to purify dirty water while remaining hundred per cent natural. In these terms, the Pond Battery research process can be read as the creation of places for transferring knowledge about nature’s intelligence and resistance, to improve collective awareness about its potential for achieving a sustainable human life, but also to overcome the idea of human supremacy on other livings.

On a disciplinary level, the project widely contributes to the current debate about the relationship between art and science and art as research, precisely about how public art can be placed in this debate and what role it could have in the exploration of this relationship. For instance, about what do we mean for “us” today, to understand what are the human and non-human components of this “us” and, consequently, of future collective subjectivities; what kind of “togetherness” public art can activate or create in the next future. In the same way, as an art-scientific research project, Pond Battery, cannot be an accomplished artwork but a temporary whole of accomplished steps in endless as research path; nor it can be interpreted as “open” according to the well-known theory by Umberto Eco, who anticipated the issues of the plurality of the artwork, because its forms, languages and outcomes evolve every time depending on the natural time, space and the climate it explores in microbial fluctuation.