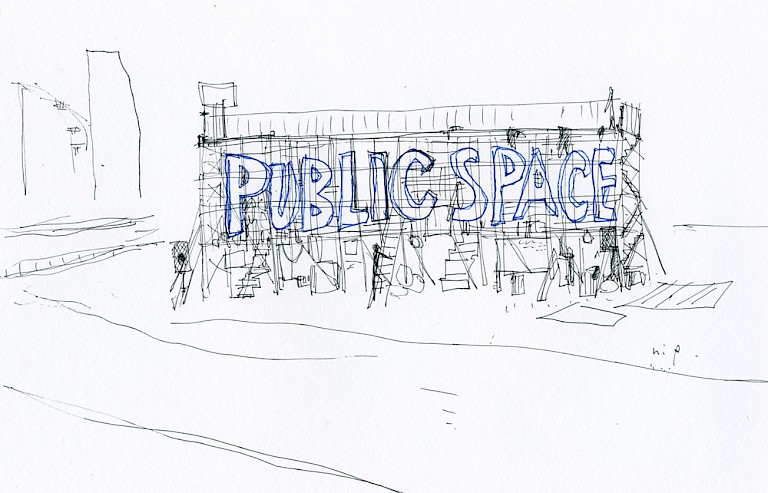 《PUBLIC SPACE》is an artwork created by ‘Nadegata Instant Party (NIP)’, which is an art unit consisted of three people, Toru Nakazaki who is also an individual artist, Daisuke Yamashiro, and an art manager, Tomoko Noda. NIP has not only exhibited in art museums, but has created participatory artworks in district areas. Throughout all their works they adjust to each district area’s situation and create a pretext with truth and false mixed inside it, creating a momentary collective.
Furthermore there is a predominant feature where they record the process of the work and reconstructing it into a documentation artwork. It is as if the “artworks”, “district” and “recordings” are restructuring the various topics in contemporary art with their original playfulness, so called, “Nadegata way”, thus creating their own unique style.

In《PUBLIC SPACE》, NIP has constructed a huge billboard saying “PUBLIC SPACE” at a riverbank of a river flowing through Kitakyusyu city. Behind the billboard is a space available for a limited time where anyone can use the space anyhow they wish to. There is a table for people to exchange their belongings, or a wall where anyone can use as a message board, or Japanese Pickles chairs, which is a chair when people sit on it, makes Japanese pickles. Moreover, a variety of things were placed in order to let people spend their time freely in a space that feels comfortable and relief. About for a month various events like music festivals took place and activities changed. NIP with the local people has overwritten a riverbank, which is originally a public space, into a “temporary public space”.

Nadegata’s way of demonstration, which questions public nature. The nominated artwork 《PUBLIC SPACE》shows not only its uniqueness to a specific district area, but questions “public nature” in Japan. Comparing to other Asian countries, modern Japanese society has a unique aspect in public spaces in cities. In the writer’s opinion, Japanese “bitoku (virtue)” from foreign perspective actually give Japanese people a kind of suffocating feeling to be what the foreigners expect it to be. For example, the manners in public transportation systems or public spaces, which Japanese people value may seem somewhat respective from a foreign point of view. It is respective in a way, however at the same time it is a formality that is overly expected making it an extreme regulation, and sometimes tend to make Japanese people obey it due to their obedience. The virtue of obeying has turned into a self-suppressed public space activity. In other words, a “public” space thus becomes a place with rules and regulations, no longer being ours. This is the previously mentioned currently spreading “public nature” and the uniqueness that Japanese people have towards public spaces.

《PUBLIC SPACE》, the billboard was constructed at a riverbank which is originally public space. However, has or has not the riverbank been a public space for the locals? In a sense, NIP has created a “public space that is meant to be”. This work is a Nadegata’s way of demonstration of adverse claim towards Japanese “public” by using a huge billboard with a visual aspect of popular culture and containing a style of “public art”.

Kitakyusyu city is a city located in the north part of Kyusyu Island in Japan. Here six groups of artist used public spaces to exhibit their artworks in an exhibition called “Art all around the city 2012 ART FOR SHARE”. With the base of the Committee for consideration of creation of specified nonprofit corporations Kitakkyusyu (NPO Souwokangaerukai Kitakyusyu) and corporation by many other local companies, and funds from cultural foundations this exhibition was brought about. Through the artworks and sharing of processes by participating, they aimed to make the citizens “the maker of art”. It is not just an ordinary exhibition of public artworks, but a kind of artwork that involves the whole city, which allows the artist and citizens to build up an artwork. 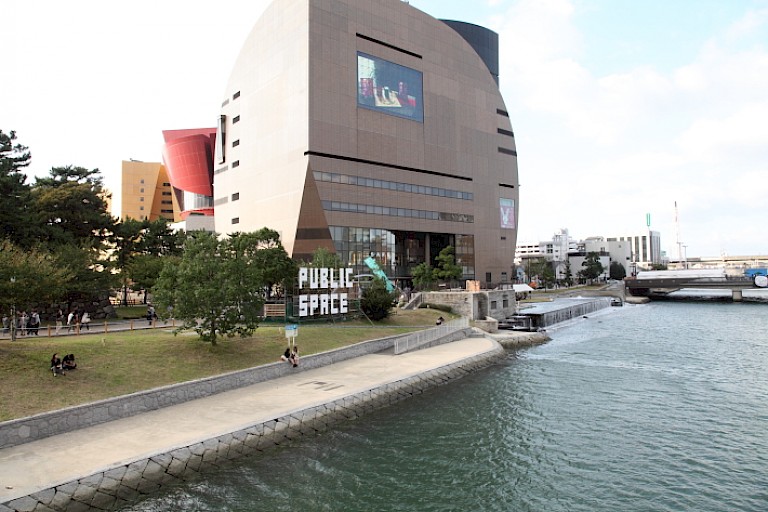 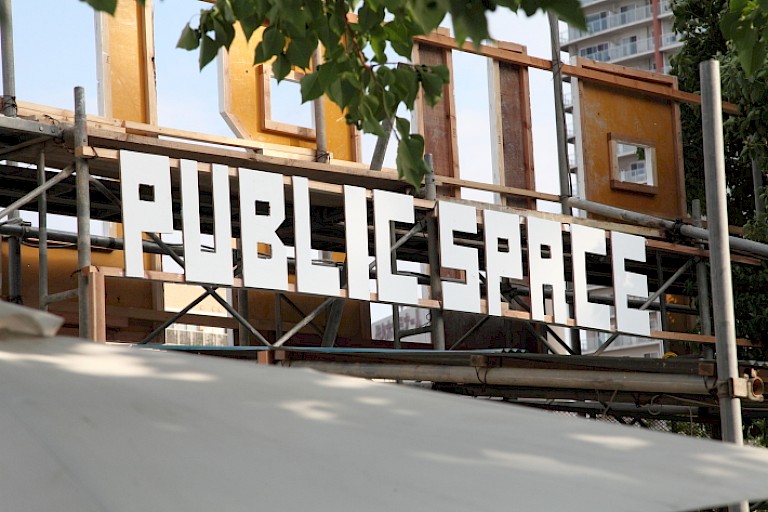 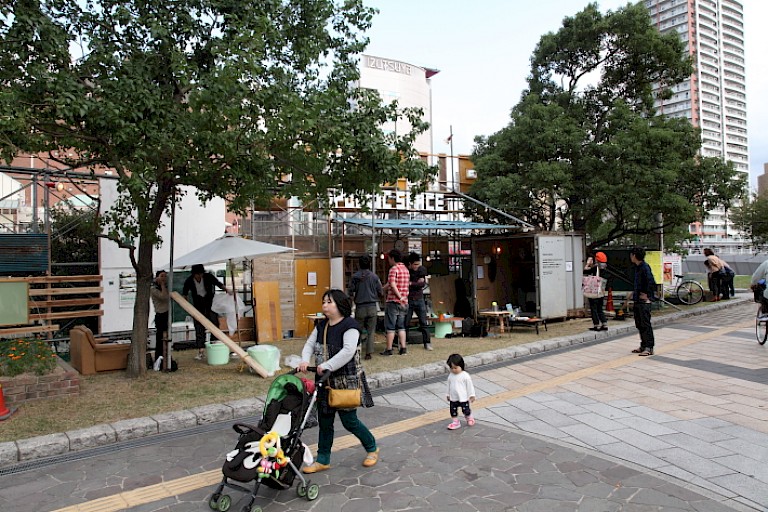 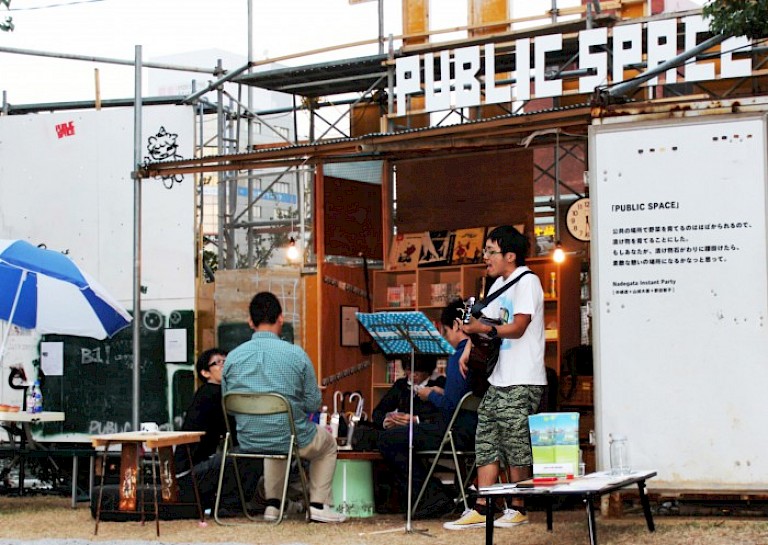