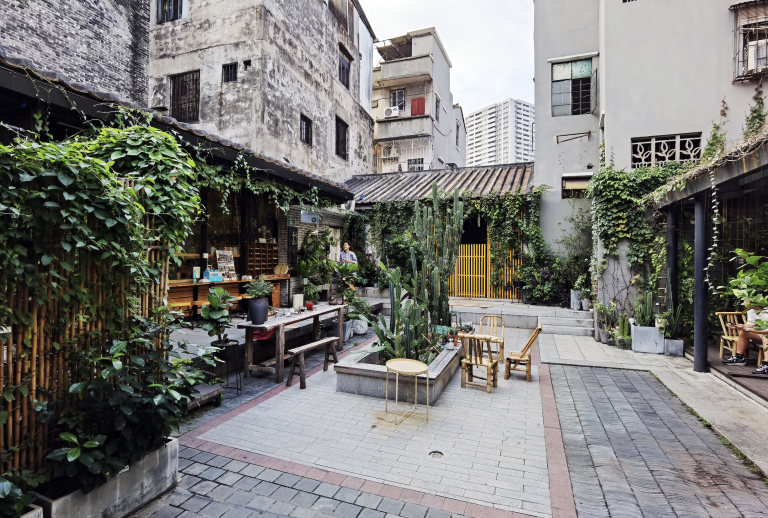 The "micro-transformation" of Puntoon Village is an urban renewal project supported by the government’s fund. Under the premise of preserving the historical and cultural heritage resources, it advocates to develop an accurate design control process for the traditional buildings and landscapes design in the historical urban environment. The project is based on the historical protection as the premise of space environment renewal, restoring the traditional rural settlements, promoting the integration between the urban and the rural lives. It is based on the recovery of the local people's community, promoted the overall upgrading of the old facilities, finally it is a participatory planning with the aim of recalling the traditional urban daily folk life.

This project tries to base on the implementation of the real construction process, explores and restores the intangible cultural heritage activities. Since 2016 the participatory planning and design with the community activities have been carried out to actively coordinate the interests of all parties involved in the process of micro-reconstruction. The project also assists the local residents to restore the local folk culture activities, so that the residents can regain their confidence in the local culture.

From 2007 to 2013, due to the expansion of Liwan Lake Park and the construction of "Xiguan Square", Puntoon village started to expropriate and demolish the area, and then came to a halt for various reasons. Some of the expropriated houses have been bulldozed, others have been abandoned and have fallen into disrepair. What has not been expropriated is increasingly being rented out cheaply or used as warehouses in nearby wholesale markets, leaving the young and the old to stay behind, and the village is becoming less populated.

In June 2016, Puntoon village was included in the first batch of micro-renovation projects in Guangzhou. The renovation project covers an area of about 32,128 square meters, and the renovation involves 165 houses that have been expropriated. As the first urban renewal project with the purpose of "preservation" in Guangzhou, the increasingly dilapidated Puntoon village has a turning point. The Liwan District Old City Rennovation Project Center is the construction unit, and the Liwan District Construction Project Management Center is entrusted to undertake the construction. Guangzhou Urban Elephant Architectural Design Consulting Co., Ltd. and Guangzhou Urban Renewal Planning and Research Institute as a consortium undertake the architectural and landscape design work of micro-reconstruction.Including the construction of various infrastructure and supporting service facilities, renovation and activation of public buildings, combined with facade renovation and street landscape design, to improve the overall appearance of Puntoon village.

In the early stage of the project design, Guangzhou Urban Elephant Architectural Design Consulting Co., Ltd. and the Community Construction and Development Center of Fanwuqi launched the public participation planning and design in 2016, and began to build the public participation mechanism, consciously promoting the construction project to the public art behavior with public interest appeal discussion.So that the project has a certain value and significance of experimental and social participation.The first phase of micro-transformation was started on February 12, 2017 and completed in 2018. The second phase of micro-transformation was started on April 23, 2018. Although the project has been fully completed in 2019, public participation is still continuing to assist local residents to restore local folk culture activities.Incubate spontaneous civil organizations with the foundation of local contract, so that residents can regain their confidence in local culture.

Peng Li graduated from Delft University in 2007 with a master's degree of architecture. He has many years of practical experience in architectural design in China and abroad. In 2013 , he joined in the School of Architecture &Applied Arts, Guangzhou academy of Fine Arts(GAFA) as a professional teacher, as well as the director of Urban&Architecture Studio.

Based on the background of the GAFA, he gradually observes the city as both an artist and an architect, treating the transformation and renewal of urban space in experimental artistic thinking and attitude, exploring the topics on the social organization renewal in urban spatial renewal.

At the same time, as a professional architect, Peng Li actively cooperates with Guangzhou Urban Elephant Architectural Design Consulting Co.Ltd, and has achieved a lot of research and practice works on the revitalization and utilization of architectural heritage, urban space transformation, public space reconstruction in the transformation process, social organization innovation and other aspects in the Pearl River Delta region.

Contributions of the project

1、To infuse modern life into traditional settlements: the project is a balance between urbanization and preservation of a traditional settlement. On the preservation of the historical and cultural resources, through the modernization of the infrastructure and public environment , the living condition of original residents should be greatly improved.

2、Restoration of township covenant social organization through “public participation”: this project is a kind of activation of social organization. Faced with the decline of social structure and the chaos of spatial structure, based on the traditional clan relationship, through the public participation, the independent management organization and cultural identity of villagers are gradually restored, making Puntoon village a modern complex urban residential area with the characteristics of traditional township covenant organization .

The value and influence in the field of art

After Joseph Beuys, the value of contemporary public art is no longer the traditional form of artistic expression, but through any form of artistic creation, including objects，events and behaviors. A art should be defined to rethink and rebuild a belief which is a relationship between people, and between people and things. This relationship includes the discussion and definition of important issues such as historical and cultural values, public space, and modernity.

Based on actual construction projects, this project focuses on many social issues, such as property rights change, traditional lifestyle change, public interest intervention, historical features and memory loss, etc, behind the spatial transformation in the process of urbanization. Being both a architect and a artist, combined with the dual means of building landscape environment and public participation action to reconstruct the public space, which becomes the artistic value and experiment of this project.

Its inspiration and impact on the public

At the level of government management: the innovation of this project combines public participation in spatial renewal with construction, and there are many innovative points in the mechanism of project design and implementation. At the 9th Plenary Session of the 10th Session in 2021, Guangzhou government mainly mentioned the Puntoon Village Project and affirmed its innovation and implementation effect in Guangzhou urban renewal.

At the social level, the micro-transformation of Puntoon Village has been completed after more than three years since it was launched in 2016. During this period, the project was fortunate to get support and attention from different related reports nearly 30 times. This project also has published 6 articles and won 3 provincial and municipal professional awards.

Puntoon Village is located by Lychee Bay in Xiguan, Guangzhou. The Lychee Bay has evolved from the royal gardens and orchards in the Han and Tang dynasties, to the famous countryside, private gardens and mansions of merchants and celebrities in Ming and Qing dynasties, and to the Liwan Lake Park after the establishment of PRC in 1949 and finally today’s urban open space. While passing on the beauty of Lingnan gardens, the Puntoon Village and its surrounding area have seen a growing tendency of public nature. Puntoon Village is the only local settlement in the historic district that retains the complete layout, pattern and typical plain features from Qing Dynasty, which has been the home to both onshore Tanka and clans of various surnames.

Because of continuous urbanization, Puntoon Area gradually transformed from traditional agricultural and fishing settlements into low-rent housing and warehouses dependent on commercial economy, which broke the social relationship established upon clans and shattered the community’s sense of security and recognition, because of the aging aborigines, new immigrants and flowing short tenants. Therefore, to rebuild the sense of identity, transform the programs, modernize the living standard and improve spatial publicness became the most challenging tasks and goals for transforming Puntoon Village and every other urban villages into modern residential communities. There is always a paradox in this process, which is the conflict between restoring the traditional landscape of the village and meeting the requirements of the modern life.

Therefore, this project is in the premise of historical and cultural heritage resources, for a specific environment and the problem using specific "minimally invasive" transformation strategy, from the micro level of accurately solve the problem, gradually improve the quality of the overall living environment and space of the village, and through times of participatory planning to assist local residents to restore local folk culture activities.

The interdisciplinary collaboration in the project

This project in the process of construction, set up jointly platform or the negotiation and coordination under the government's initiative committee, as well as the public media, the clients, construction units, the local villagers, by means of participatory planning and design. It is set up the mechanism of dialogue and coordination, also introduced including anthropology, geography, management experts and scholars participate in the discussion.

1、The micro-renovation of in Puntoon Village is based on the spatial renewal of urban villages under the historic preservation: the project maintains the spatial pattern and texture of settlements in villages since Ming and qing dynasties, reconstructs the regional public space system, and preserves and recreates the features and spatial quality of traditional villages.

2、The project is a social organization renewal with multi-collaboration and public participaiton: the project has embarked on a development direction different from the traditional planning logic. This project is based on multi-cooperation of various resources and coordinate with the local government and civil forces. This is a new idea that overturns the old urban and rural renewal mode and forces the transformation and renewal of space to develop in the direction of multi-cooperation.

3、This is a new idea to subvert the past urban-rural renewal model by establishing an open source platform organization with the participation of multiple professional forces and cross-border collaboration.Under the circumstances of urban renewal in the historic centre of the category of conservation and the activation in conventional commercial planning and design program, the efforts by planning, landscape, architecture, historical culture conservation, participation, community building, space, activation, inheritance and spatial knowledge popularization education, policy, translation, innovation of system and decision-making process, a variety of technologies and means of communication. Reconstructing the relationship between space and users, including residents and community groups, seeking the balance and new possibilities of protection, development, renewal and utilization, forcing the transformation and renewal of space to develop towards a direction of multi-party consultation and cooperation. 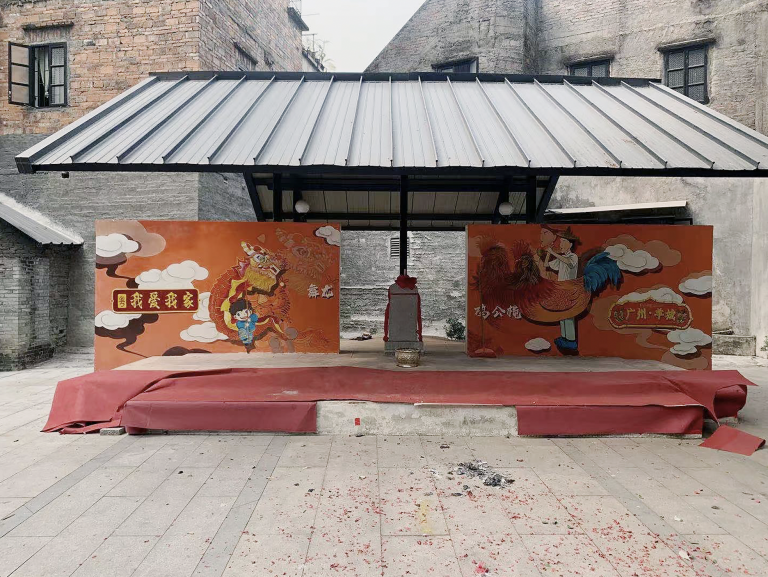