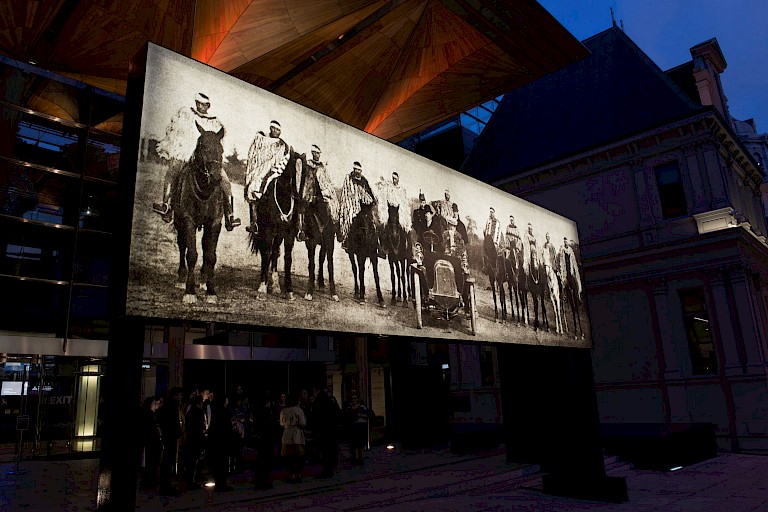 Raise the anchor, unfurl the sails, set course to the centre of an ever setting sun!

Nathan Pohio is a New Zealand artist of Māori heritage with iwi/ tribal affiliations to Waitaha, Kati Mamoe and Kai Tahu (also known as Ngāi Tahu and as such understood as the principal Māori iwi of the southern region of New Zealand). As an artist Pohio calls upon Kai Tahutanga (the inherited common identity of his tribe, guiding decisions and underpinning what they do) in the face of colonial objectives. His moving-image works draw on a variety of photographic and cinematic practices. Since first exhibiting in the late 1990s, Pohio has continuously worked to represent the indigenous voice within the field of Expanded Cinema, a field first defined in 1970 by Gene Youngblood. Youngblood argues that a new, expanded cinema is required for a new consciousness. Pohio perceives indigenous voices present within this notion as he notes that distinctive developments within the language of cinema occur over time and internationally.

Raise the anchor, unfurl the sails, set course to the centre of an ever setting sun! (2015) is an art work first commissioned for SCAPE 8 New Intimacies in 2015. SCAPE Public Art is a major commissioner of new art in the public realm by New Zealand and international artists in Christchurch, NZ. The art work was subsequently shown in two other locations - in Auckland, NZ, as part of the Walters Prize; and in Kassel, Germany, as part of documenta 14_.

Nathan Pohio presented Raise the anchor, unfurl the sails, set course to the centre of an ever setting sun! on a monumental scale as an illuminated free-standing billboard. The art work reproduces a striking image - a photograph by C.J. Jennings documenting a historical event in 1905 which saw indigenous leaders meet representatives of the British crown. Ngāi Tahu leaders - ancestors of the artist - magnificently attired in full ceremonial dress and on horseback, flank the Governor of New Zealand, Lord Plunket, his wife, Lady Plunket, and others in their motor car. They are on their way to the Tuahiwi Pā (Māori village or defensive settlement) at Kaiapoi to bring the Ngāi Tahu land claim to vice-regal attention. On discovering the photograph Pohio was struck by the undeniable mana_ of the Ngāi Tahu leaders, and by how the image speaks of the Māori manaakitanga, or hospitality. Although Ngāi Tahu were in court with the Crown over land grievances at the time, Ngāi Tahu dignitaries had ridden out to welcome Lord and Lady Plunket who were manuhiri (visitors) to their lands and escort them to the marae (meeting grounds and focal point of the community), rather than waiting for them to arrive. To those in the car - the representatives of the Crown, and therefore of Empire and the vicious battle over Māori lands the English had in many cases had taken by force - Ngāi Tahu display their mana and uphold their cultural traditions including manaakitanga - the duty to host- to the people in the car. But there’s more at stake than just good manners or correct etiquette, there’s land at stake. As Louise Garret writes of the art work “Importantly, for Māori, the relationship between the land, the natural resources it sustains, and the people is not only symbiotic but familial: the land is regarded as a divine ancestor, a conviction that was recently recognised in settlements in which a river and a mountain in the North Island of New Zealand were granted legal status as human beings.” What followed this photograph was an opportunity for Ngāi Tahu to bring their land claim to the attention of the Crown. This is a historic moment, and a debate which is still defining New Zealand politics.

As an art work, Raise the anchor… is an exceptionally strong image encapsulating many essential values of Māori culture. Among these are Kaitiakitanga (stewardship), Manaakitanga (caring for others), Whanaungatanga (relationships), Tohungatanga (expertise), Tikanga (appropriate action), and Rangatiratanga (leadership). Whanaungatanga (relationships and sense of connection) is powerfully demonstrated in the importance of site for the art work in each of the three showings. In Christchurch Pohio presented the work on the riverbank, between a city block owned by Ngāi Tahu and the regenerating CBD controlled by the Crown, intentionally setting up a dialogue of historic, cultural, and political dimensions. He sited the art work on a direct diagonal line between The Bridge of Remembrance, a civic sculpture of Henry Nicholas (the first soldier from the Canterbury Regiment to be awarded a Victoria Cross and therefore symbolic of the crown), and a historic urupa (Māori burial ground).

To re-site the work in Auckland it was essential for Pohio to find connection to the site. As Ngāi Tahu, Pohio felt a deep responsibility for his kaitiakitanga (guardianship) of the image, and the issue of how to bring his ancestors to Auckland - into someone else’s land - was problematic. The artist reconciled this with the notion that the men from Kaiapoi could tautoko (support) a Gottfried Lindauer portrait of another Kaiapoi chief in Auckland Art Gallery’s collection. For Pohio it was deeply significant that “these representations of men of mana and our rangatira (leaders) all of Kaiapoi are gathered for a time, to share the same site and be present together for the first time”. Standing at the entrance, Raise the anchor… formed a portal of sorts under which visitors to the gallery entered. As a gateway, again the artwork embodied the values and undercurrents present in the art work - as a ritual of inauguration, of welcoming, of transition from one place to another.

To represent the art work in Kassel the artist faced the same dilemma: “What is the whanaungtanga with Kassel? How do you bring your ancestors into another hemisphere, country, town, place, site?” he asked. Pohio found it at Grimmwelt Museum in an exhibition by the Grimm Brothers. Amongst more expected items and drawings connected to their children’s stories was a small drawing of a New Zealand chief copied by Jacob Grimm. It was a young rangitira (leader) drawn by Sydney Parkinson on Captain Cook’s first voyage to New Zealand. “My God! There’s your whanaungatanga to Kassel. You come to the grounds of the Grimmwelt and you face the ancestors back towards Aotearoa New Zealand” Pohio related.

Raise the anchor, unfurl the sails, set course to the centre of an ever setting sun! was one of four finalists for the Walters Prize 2016, New Zealand’s premier art prize, and described in the jury statement as “one of the most resonant and sharp works to come out of the highlycharged political and cultural situation of the Christchurch rebuild, following the devastating earthquakes in 2010 and 2011.” A quiet and powerful conceptual intervention that reasserts the cultural landscape of Otautahi-Christchurch, Raise the anchor… is infused with the drawling grandeur of popular western film history. The photograph has been cropped so it’s the same format as the early 20th century cinematic screen, and its similarity to the poster for the iconic western, The Magnificent Seven, is clear, even though it predates it by more than five decades. There’s the familiar sense of thrill and adventure that the Western promises, but also perhaps a chance of that other favourite cinematic trope - the ‘a do-over’. Raise the anchor….. speaks to untold or forgotten stories of Christchurch's history, making these stories monumentally visible in a city that, before the earthquakes, delighted in its colonial past and reputation as the most English of cities outside England. At a time when so much of the city is being rebuilt and new identities established, the work confronts and contests the histories that are embedded in the land and offers new hope for a city that more correctly represents its people and cultural pasts. 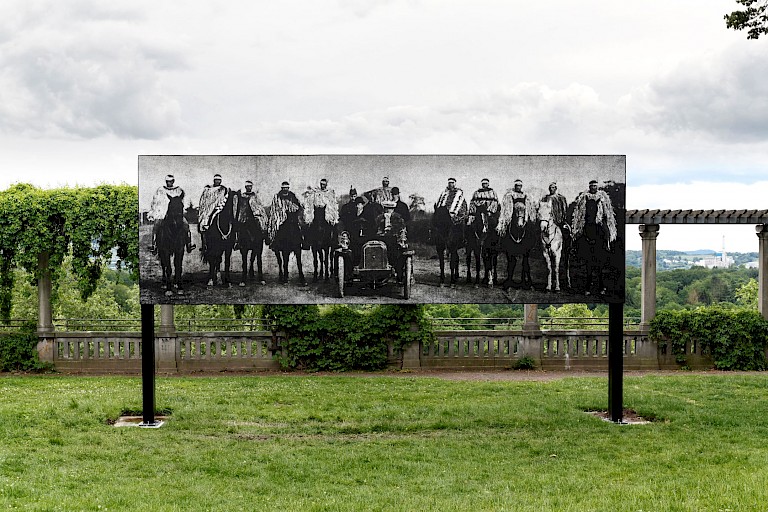 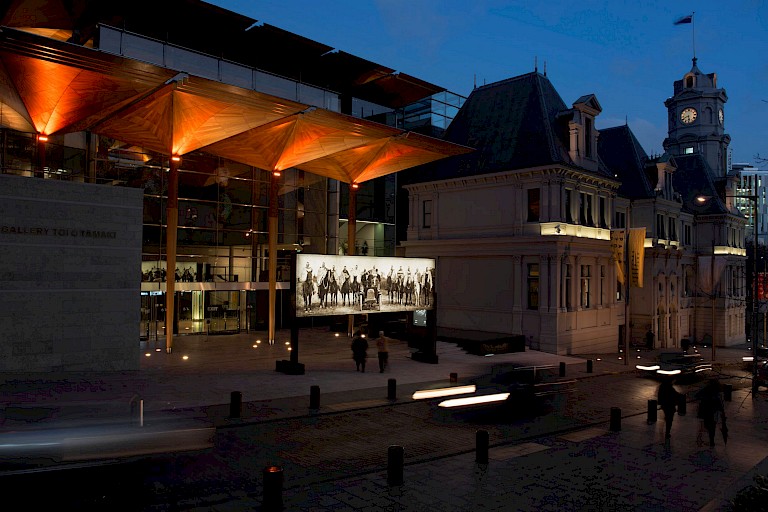 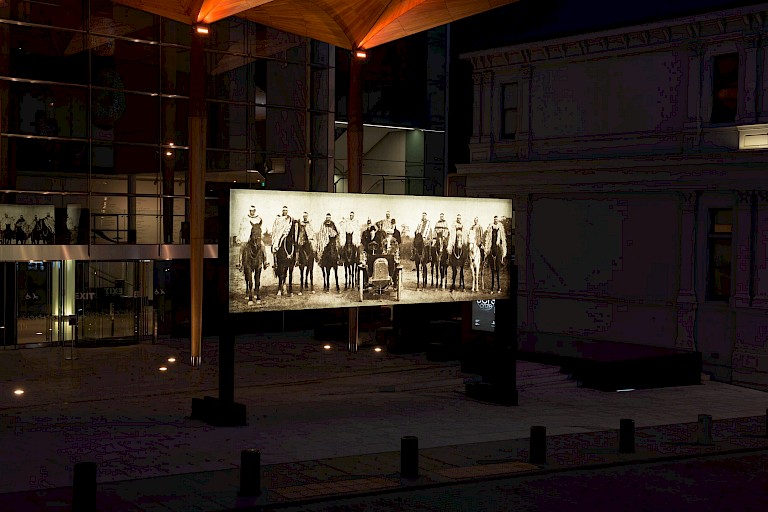 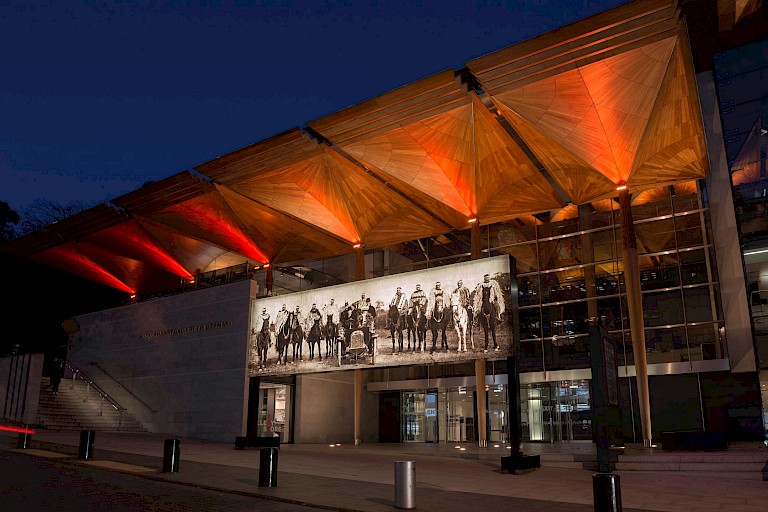 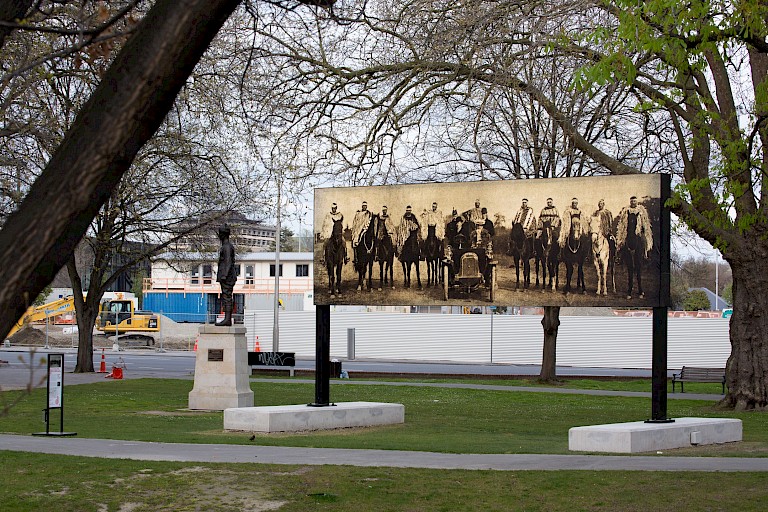 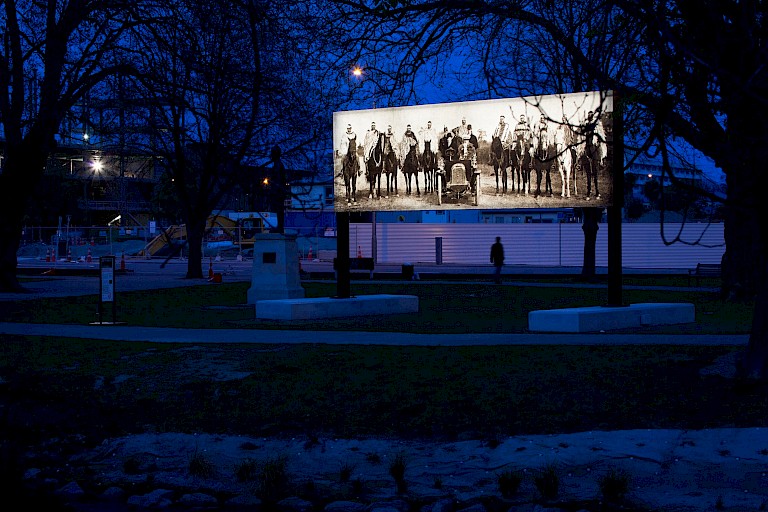 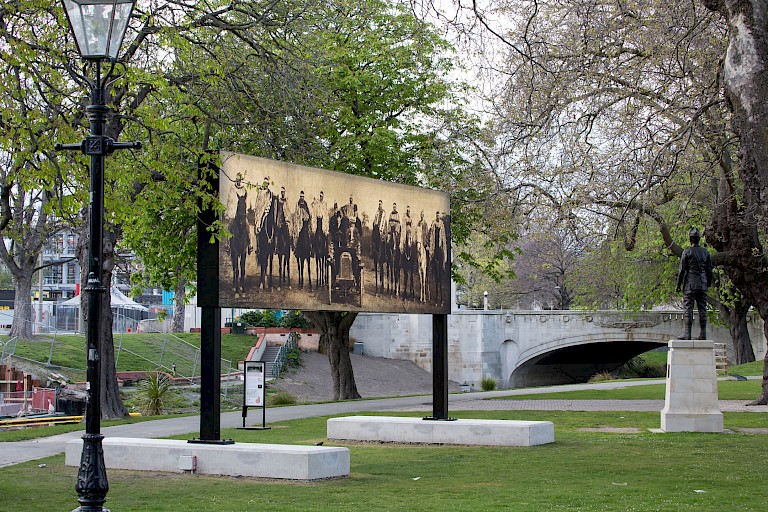 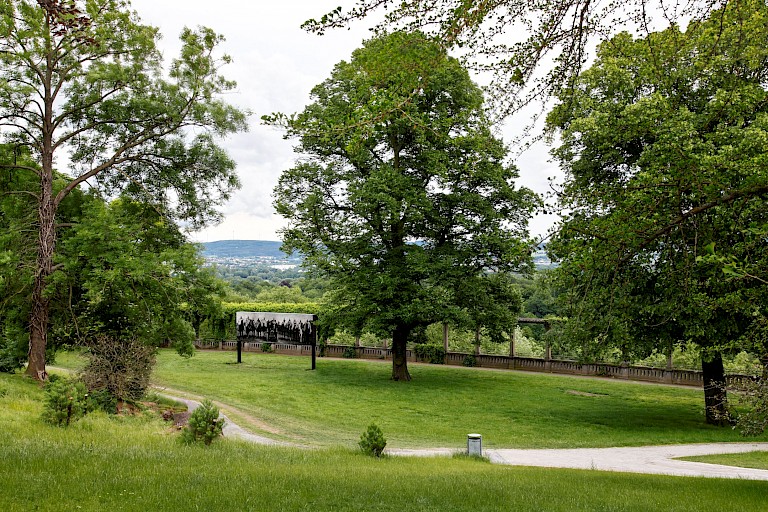