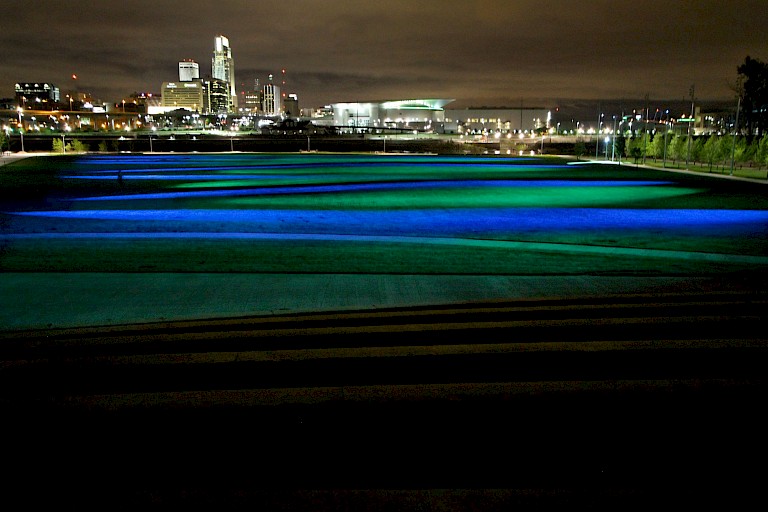 Early site visits provided inspiration for the project design. Walking across the pedestrian bridge that connects the cities of Omaha and Council Bluffs, Corson noticed the natural movement of ice flows breaking and turning in the river’s current. In contrast, the expansive Great Lawn reminded Corson of the geometry and scale of formal European Gardens. These two elements informed the development of designs and patterns of shifting lights that spread across the main 680 by 475 foot area (roughly 207 by 145 meters) of the Great Lawn, and at moments reach all the way across the river to Omaha.

Beyond the beauty and attraction of the lighting itself, a core strategy for attracting visitors to the park was the incorporation of interactive components within the lighting sequences. From evening until dawn, Rays cycles through half-hour intervals, each incorporating two randomly selected games between sensing sequences. When sensing, Rays uses radar detectors to project spinning patterns in areas of the park where it senses movement. When in game mode, Rays selects from eight game options that range from chasing games to collaborative efforts, each lasting three to six minutes. Easter Eggs invites players to move through a series of gestures to prompt short visual “prizes.” Flash Mob asks participates to organize, and if more than 55% of people on the lawn rush into a huddle and then run out again, lights swirl wildly. Stealing Dorothy Hamill’s Spotlight, named after the famous figure skater, shines a spotlight on one person while other players try to trick the program to steal the spotlight away. By incorporating interactive components into the design, Corson sought to invite park visitors to actively play with and alter the space through their participation.

In addition to human-scale interactive elements, Rays was designed to accommodate change in natural cycles. A major flood event originally delayed the project’s installation by two years and part of the site’s function is to serve as a flood plain. Rays thus serves as a vibrant piece that can fill the space while also being mounted out of reach of floodwaters. Additionally, the work was designed to change colors with the seasons to complement the color variations of the Great Lawn, from green grass in spring and summer, to a brown field in autumn, and snow cover in winter.

Since the park’s opening, the waterfront has continued to evolve. The Great Lawn has become a regular gathering space for festivals and events and, nearby, office buildings, apartments, and businesses are under construction. Such large urban changeovers bring with them a variety of debates, from gentrification to questions of access. In Council Bluffs, the riverfront’s renovation is still unfolding and, as years go by, it will be worthwhile to see how the region develops through and with public art as a driver.

In the meantime, Rays has already served as a key steppingstone in the effort to encourage usage of the waterfront. While notable for drawing in new visitors, Rays’ playful invitations and intricate sequences also add color and light to neighborhood routines. Reflecting on the experience of the work’s installation, Corson remarked on the regular usage of the park throughout nighttime hours, from kids and adults playing in the evening, to parents with awakened children in strollers at 3 a.m., to joggers starting at 4:30 a.m. Commenting on the project’s ability to engage such varied audiences, Corson noted, “I think that because it’s a visceral experience and it’s easily accessible, everyone has their own take on it. It is open-ended enough that people can pull patterns or imagery from it that may or may not correspond to where my initial inspirations came from” (interview with the artist). 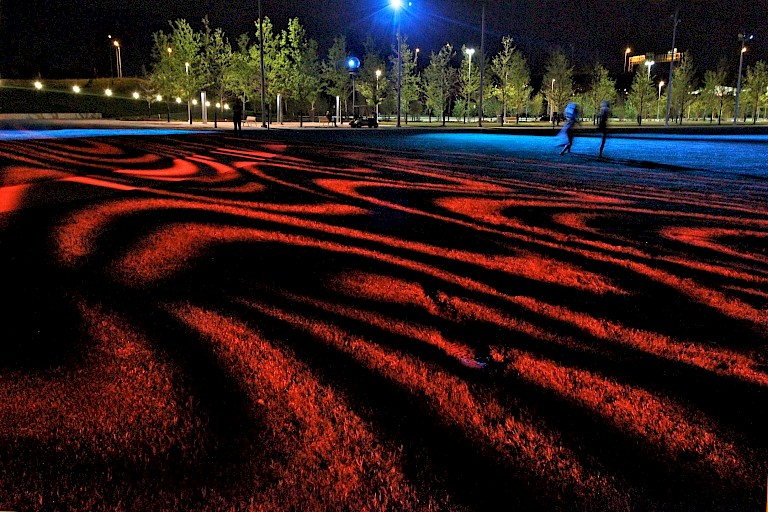 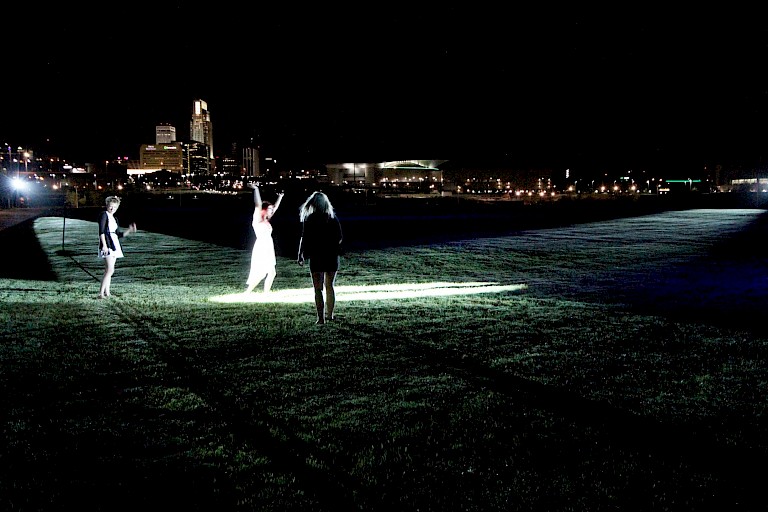 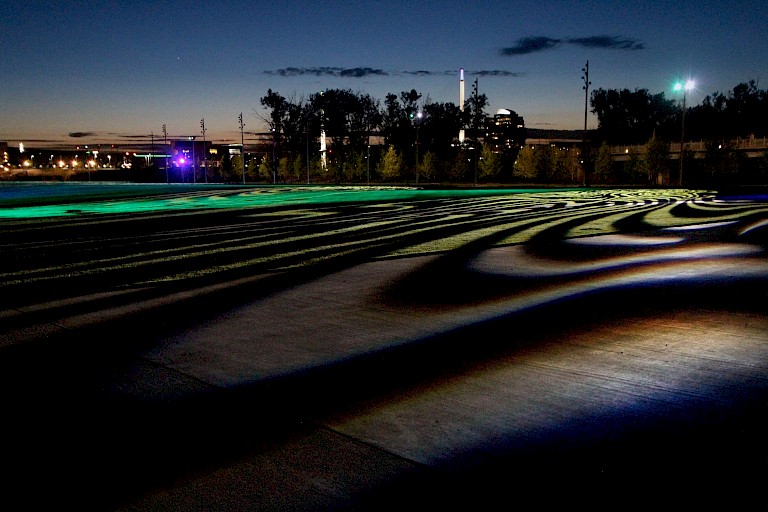 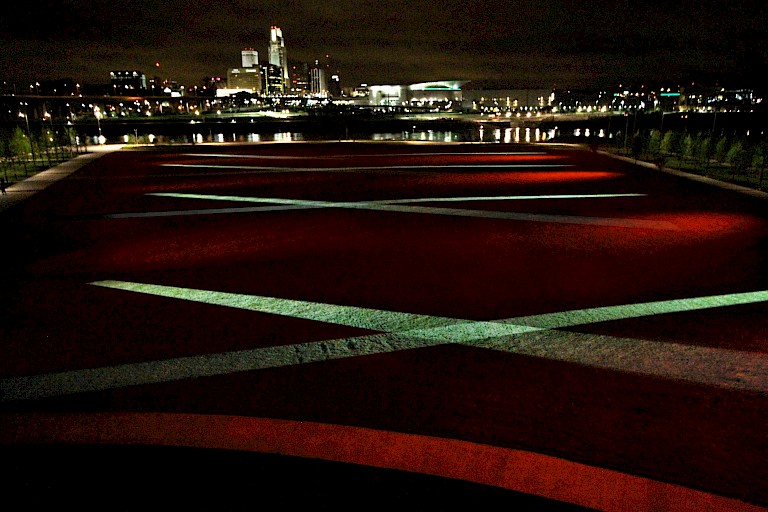 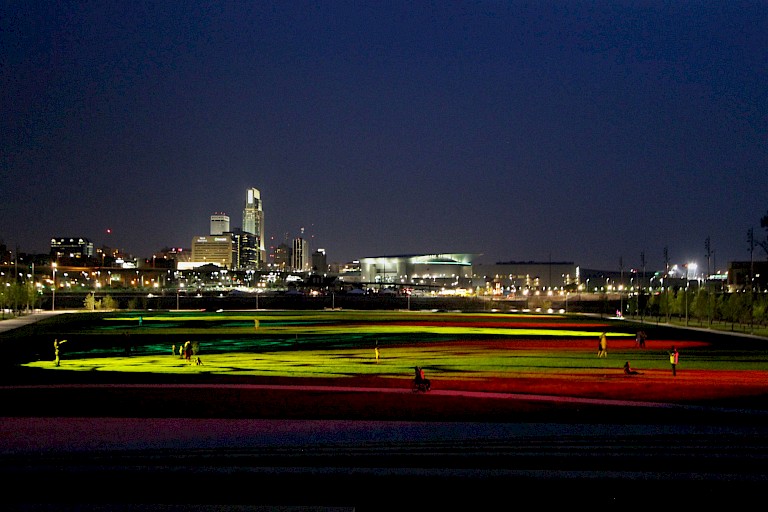 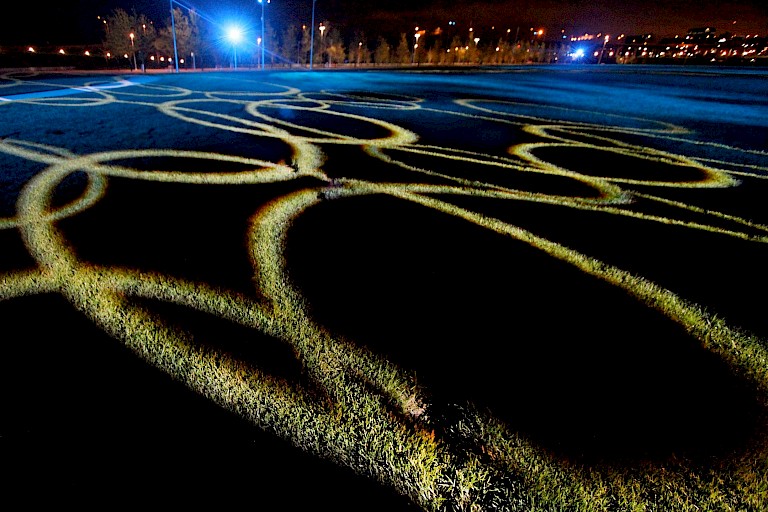