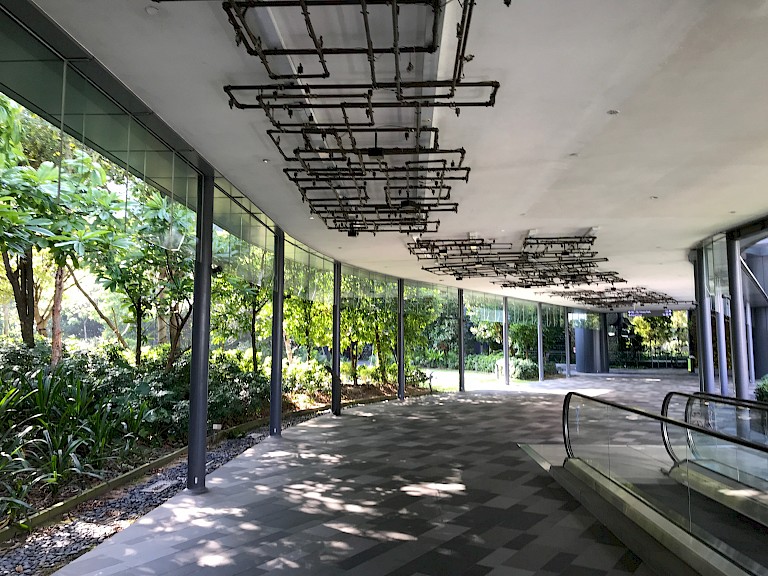 The installation Sonic Pathway engages sound as a medium for representing urban conditions in flux. The work comprises an orchestration of sound made by more than 500 pieces of solenoids—electromagnets that generate a controlled magnetic field—hitting on copper pipes. Accompanied by ambient sounds of birds and nature recorded and remixed by the artist, the resulting composition corresponds to the acoustic of the pathway, travelling from one end to the other. The aural architecture comes to life and responds to individuals traversing the walkway from one end to the other. Challenging us to rethink how we listen to our environment, a sense of anonymity reverberates through the space as a borderless territory designed for sonic experiences. Bodies and movements along the pathway become both the transmitter and transmitted, facilitating dialogues between space and the corporeal.

Nestled along a covered walkway connecting eateries to offices at Mapletree Business City II (MBC II), Zul Mahmod's Sonic Pathway engages the sonic as a medium for representing urban conditions in flux. The work of various facets challenges us to rethink how we listen to our environment, especially in a fast-developing city like Singapore that constantly bears witness to cycles of change and construction. One facet of the work is the orchestration of sound made by more than 500 pieces of solenoids—electromagnets that generate a controlled magnetic field—hitting on copper pipes. Accompanying the rhythmic sounds produced is an ambient piece comprising birds and nature recorded onsite and remixed by the artist. The aural architecture further comes to life and responds to individuals crossing the walkway from one end to the other. Thus, each experience of Sonic Pathway is unique as it varies on the number of people occupying the space. Occupying an outdoor transitionary space, encounters with the work also depend on sounds in its immediate surroundings. Bodies and movements along the passageway become both the transmitter and transmitted, facilitating dialogues between the space and other inhabiting entities. In 2018, Zul also further activated the work in a live sound performance comprising a multi-layered composition that displayed the varying approaches to the medium of sound in the artist's practice.

In addition to sound Sonic Pathway also comprises sculptural qualities. Trained as a sculptor, Zul's sound installations often incorporate everyday items that display his sensitivities to form and materiality. One recurring medium often used in his works are copper pipes selected due to their connotations as conduits for connection. For Sonic Pathway, Zul also chose to work with copper pipes due to the materiality of the material, which oxidises and develops a unique texture over

Situated in Southwest Singapore, along the intersections of Pasir Panjang and Alexandra Roads, MBC II is part of the larger Mapletree Business City (MBC) development. Spanning 13.5 hectares, MBC revitalised a precinct of low-yielding and under-utilised warehouses and buildings. Typical of an integrated commercial development, MBC combines office, business, retail and public spaces seamlessly connected to transport nodes, amenities and services. Currently regarded as one of the largest integrated developments in Singapore, MBC is home to large technology companies such as Google Asia-Pacific Headquarters and Samsung Electronics as well as the pharmaceutical company Pfizer.

Sonic Pathway is one of four commissioned public artworks located within a lush garden landscape in MBC II. The artwork created is the result of a unique collaboration between Mapletree Investments Pte Ltd and NTU Centre for Contemporary Art Singapore. Themed around Culture City. Culture Space. the artworks aim to enrich the experiences of its tenants and visitors by enhancing both physical and built environments. 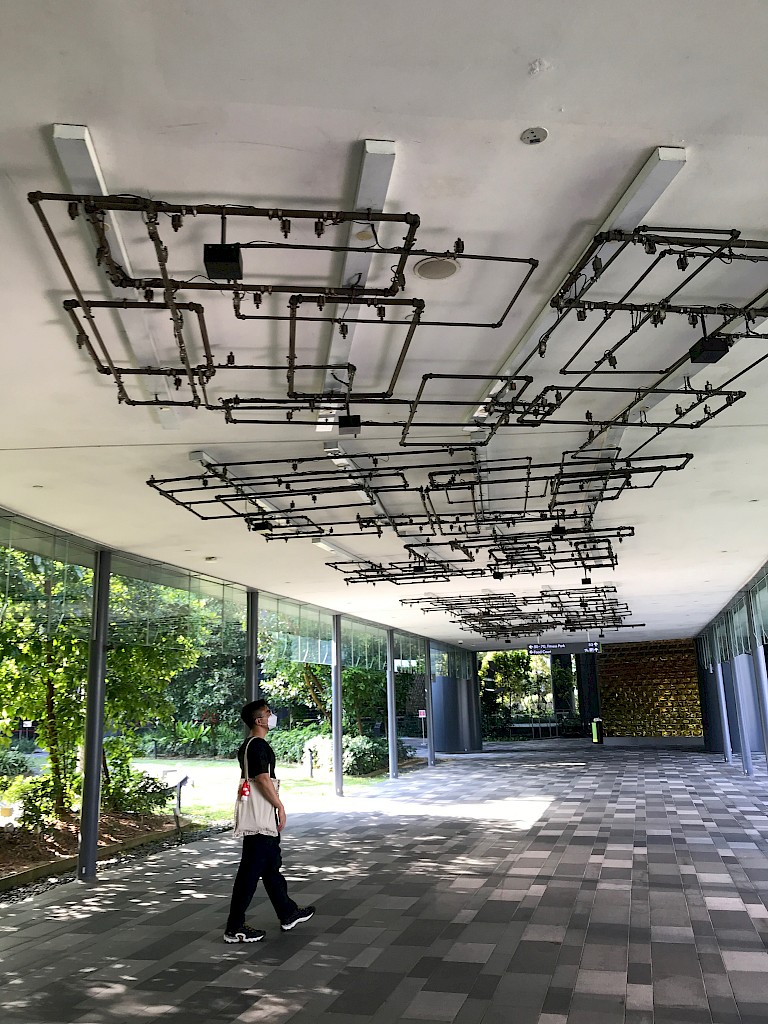 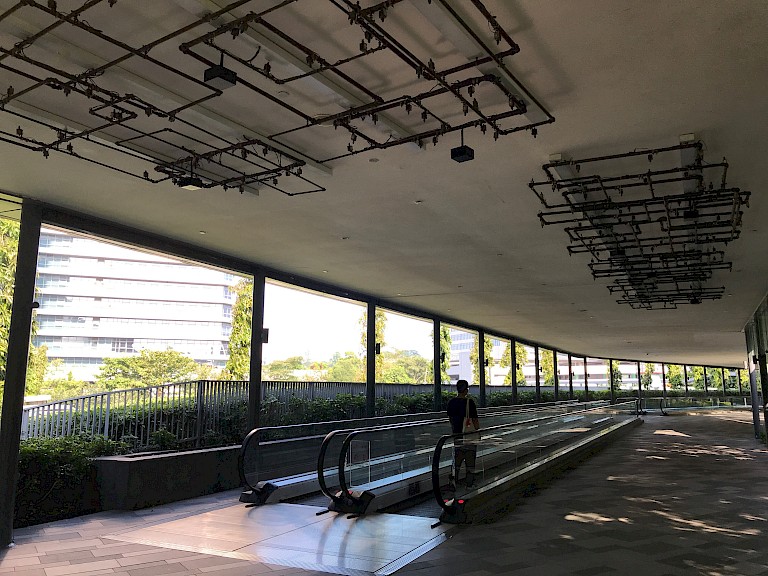 Zul Mahmod is a sound-media artist. Formerly trained in sculpture, Zul has expanded his practice to include sculpted sound installations and live sound performances to activate a sensory experience beyond the visual. Everyday objects are often utilised and reconfigured in his works to investigate the audible attributes of physical space in relation to the emotional responses of its inhabitants. Zul is regarded as one of Singapore’s leading sound artists and has been at the forefront of a generation of sound-media artists through his interdisciplinary and experimental approaches.

Zul was one of the participating artists at the Singapore Pavilion, 52nd Venice Biennale (2007). His works have been presented at exhibitions such as SUNSHOWER: Contemporary Art from Southeast Asia 1980s to Now, Mori Art Museum, Tokyo, Japan (2017);An Atlas of Mirror, Singapore Biennale 2016 and Esplanade – Theatres on the Bay, Singapore (2016). He represented Singapore with a Sound Art Performance at the Ogaki Biennale in 2006. He also frequently collaborates with artists and practitioners from a variety of disciplines in the performing arts.

In the selection methodology of the artworks for Culture City. Culture Space., artists and their proposed projects were first recommended by NTU CCA Singapore’s curators and later assessed by the commissioner, Mapletree. The evaluation criteria included intent and concept of the artwork, aesthetics and feasibility. As highlighted by Mapletree CEO Edmund Cheng, artworks were “chosen based on the desired aesthetic for the asset. They also complement the architecture and environment as well as the experience Mapletree aims to deliver to its tenants and visitors.” In the commissioning process of Sonic Pathway NTU CCA Singapore’s curators and Mapletree were closely involved in bringing Zul’s proposal to realisation.

In conceptualisingCulture City. Culture Scape.,all the artworks take into account their unique set of surroundings and create new environments to be experienced and interacted with. Integrated into a commercial and office development project, at the heart of Culture City. Culture Scape. enriching the urban imaginary and creating a space where “work and play” coexist. WhileSonic Pathwayis located in a pathway where people do not gather or have concentrated moments of activity, its interactivity offers a space and moment of introspection for active listening.

Inspired by the idea of expanded sculptural environments, the four permanent artworks explored the interplay between landscape, architecture, and broader social, environmental, historical and economic conditions that have shaped our current realities. For example, MBC is within stone's throw from the Port of Singapore. Extending upon its rich maritime connections, flows of goods and capital continue to be integral tenets of the country's economic success, which has undoubtedly resulted in the continuously changing landscape of the city-state. As Sonic Pathway purports the constant state of flux and ever-expanding urban spaces has changed our sonic landscapes and also affected nature and other creatures that we share spaces and intertwined interconnections with.

Alongside the permanent artworks, an integral component of City Culture. City Scape. is a Public Art Education Programme. Aimed to engage with various audiences and communities, programmes and organised events include guided tours, artist talks, workshops, seminars and conferences.

While sound as a material and dynamic branch of contemporary art practices is gaining prominence, with rapid developments and strategies of presentation, the realisation of interactive sound art in the public sphere is not as commonplace. Unlike being displayed in the relatively controlled atmosphere of a gallery or museum, sound art in the public space demands an acute environmental awareness. The artwork embedded in its sonic context should not overwhelm the existing

soundscape. In the instance ofSonic Pathway, the artwork received a controversial response after the launch of Culture City. Culture Scape. Tenants with offices close to Sonic Pathway complained that the sounds emitted were distracting and even disturbing. While Sonic Pathway was originally activated for a longer duration throughout the day, it has since been reduced to accommodate the needs and demands of its community, constituents and users. And as the artist surmises in an interview with NTU CCA curator Khim Ong, “I think it is good that some people do not like it. We can please everyone. At least we understand where they are coming from. It can be a learning curve. It is about listening to what they have to say. I can use their feedback, maybe for future works.”

In her essay “An elucidation of public sound art through non-sonorous tradition,” Maria Andueza Olmedo references philosopher and sociologist Henri Lefebvre’s Theory of Moments (1947) and distinguishes between the public artwork as “monument” and “moment”. While the former encompasses a state that is static, immobile and isolated, the latter refers to an experience that is always in movement, always changing, always in context. Sonic Pathway is exemplary of a work of the second category, continually in flux; responding to movements and bodies traversing the space, and perceived differently based on the current environmental sonorous conditions. In Singapore, where the majority of public artworks are sculptural and falling within the public’s conception of what artworks in the public sphere should be, Sonic Pathway can be viewed as an ambitious, unconventional and experimental artwork. By privileging the sound instead of visual, the artwork provides a multisensory experience for passers-by.

Sonic Pathway and the three other artworks as part of Culture City. Culture Scape. is also reflective of public art as a tool for placemaking. The commissioned artworks are reflective of Singapore's multicultural identity and rich history while looking at its present and future. Melding space, artworks and people together, Culture City. Culture Scape. imbues the built environments at MBC II with its own unique identity and enlivens the spaces where we work and inhabit. Programming has also been an integral part ofCulture City. Culture Scape. Programmes include guided tours, education resource guides for teachers and student, a discursive picnic as part of Archifest 2017: Building Agency, a launch event with an after-work live performance by Zul Malmod, workshops for teachers and educations as well as the public art education summit Art, Urban Change, and the Public Sphere.