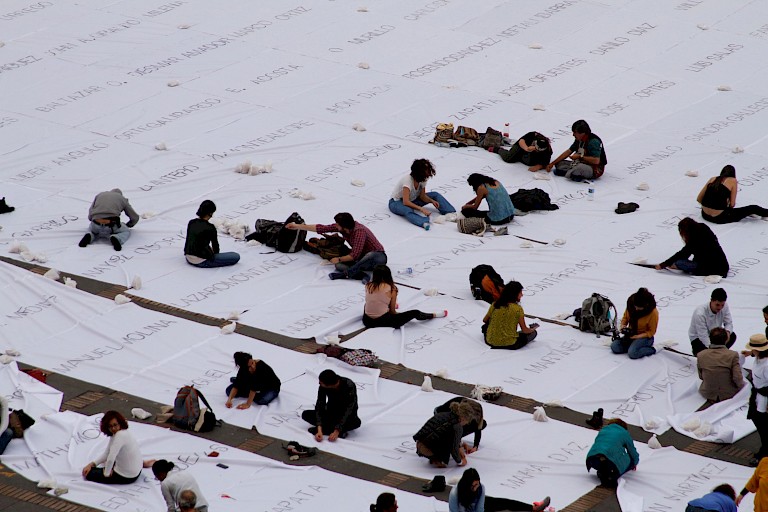 On the evening of 2 October 2016, the people of Colombia were faced with one of the most uncertain situations in their country’s history. After four years of negotiations between the government and the largest insurgent group in South America, the Revolutionary Armed Forces of Colombia (FARC), a small majority of the population — motivated by a long campaign led by the former President Álvaro Uribe — voted to reject a peace agreement that would have ended nearly 60 years of armed conflict and civil war. Peace was only denied to the people of Colombia by a margin of only half a percentage point. Public reaction was that of horror, many felt it was a devastating missed opportunity for peace. Fearing an imminent return to violence and understanding the dangers still remaining in such a volatile situation, tens of thousands of citizens began mobilising. In the days that followed two important initiatives responded to the vote and eventually came together: ‘Plantón por La Paz’ (campground for peace), a citizen-organised protest camp occupied La Plaza Bolívar (Bolívar Square) in the country’s capital Bogotá, and a public art installation by Doris Salcedo titled Sumando Ausencias (2016).

Doris Salcedo's urgent response to the vote was the latest work in a long artistic practice which has addressed and advocated for the people of Colombia caught up in generations of civil war. Her subject matter has been consistent for decades — memory, forgetting, pain, trauma, and loss. Salcedo’s sculpture and installation practice focuses on the experience of grief and mourning, and the connection between violence, anonymity and public space. She most often works with specific reference to her country of birth and home, Colombia. Since 1998 Salcedo has interviewed people whose family members have been ‘disappeared’ during Colombia’s conflict and illegal drug trade, creating art works that reference not only their brutal deaths but also the absence that is left behind. Salcedo gives her art works poignant titles, heavy with metaphorical meaning.

According to the Colombian website ‘Arcadia’ a rumour began at the Universidad Nacional (National University) in Bogotá shortly after the vote to reject a peace agreement was announced regarding Salcedo’s desire to create an artwork in response to the vote. Shortly after, an email was sent to the entire campus: “Doris Salcedo invites us to draw the names of victims of the decades-long conflict on seven kilometers of cloth and then put them together with needle and thread.” In response, thousands of volunteers from around the city gathered early on the morning of 6th of October 2016 in La Plaza Bolívar. Created in collaboration with citizens and in collaboration with the Museo de la Universidad Nacional, Sumando Ausencias (Adding Absences) took the form of a banner or ‘shroud’ across La Plaza Bolívar. La Plaza Bolivar has been the focal point for many of the city’s tragedies and triumphs. The Palace of Justice, twice rebuilt due to violence and attacks, stands there alongside the Cathedral and the National Capitol, which houses the government of Colombia. At this historical landmark, Salcedo worked with citizen volunteers to create Sumando Ausencias. Using7,000 metres of fabric the protest camp inhabitants and other volunteers used ash to write some 2,300 names on white cloth. Gathered from the government’s Registry of Victims, these names represented only a fraction, roughly 7%, of the victims of Colombia’s civil war. Sumando Ausencias was an urgent and enormous artwork, created in just one week with the help of over one thousand volunteers. Once the names were complete on the morning of 11th October, Salcedo and the volunteers began to assemble the piece. Each sheet of cloth symbolising a death shroud was carried and laid down carefully by volunteers in a gesture of respect for the absent victims, then stitched together by hand over a period of 12 hours. Once complete, Sumando Ausencias covered the entire Plaza.

In Salcedo’s own words, “Sumando Ausencias is a work of art in which the victims of the armed conflict are put in the center of Colombia’s political life by an ephemeral community formed during the making of the project: These were generous weavers who were able to gather in one single image the pain of thousands of families. The work is an act of mourning.” Reflecting on the use of ash to write the names of the ‘disappeared’ and fallen she added “the names are poorly written, almost erased, because we are already forgetting these violent deaths”. Laid over La Plaza Bolívar, ground already shaken by political violence, Sumando Ausencias offered a powerful visual image of the ongoing anger and grief felt by individuals and families. Instigated by the artist but created by the people of Bogatá, the art work encapsulated their emotion while making space for memory, and recognition of lives lost and peace denied.In this act of artistic empathy, Sumando Ausencias offers an intensely hand-worked devotional installation to evoke both the presence and the absence of human life. “The manual labor inherent in her work is one way Doris allows herself to bear legitimate witness to awful stories of pain and suffering,” Madeleine Grynsztejn, of the Museum of Contemporary Art Chicago, has commented of Salcedo’s practice.

Created from everyday materials and the labour of people whose voices need to be heard and whose country was thrown into crisis by the vote, Sumando Ausencias confronts and emphasises structures of power and exploitation. Sumando Ausencias acts as a political and mental archaeology, acting to make visible collective trauma and offer symbolic and unifying elements for moving forward as a country. The art work does not suggest change or a solution, but allows the history and trauma to be acknowledged and honoured. In creating a collective experience through the making of the art work and by using humble, everyday materials and common skills, Salcedo explores craft as a tool for the construction of collective memory. “Our past is something that we can build ourselves by the act of narrating it. To look back at it in the present allows for forgotten memories to resurface” the artist has said. Sumando Ausencias highlights the way memory functions in our contemporary society, where each new tragedy erases the previous one, but not the grief. Although monumental in scale and visually powerful, Sumando Ausencias is an intimate art work. Like many of Salcedo’s public installations, this work was for victims and their families — not the city, commissioning bodies, or even the art world. Instead, Sumando Ausencias confronts the usual structures that surround famous artists and art works with the ugly truth of death, civil war, and exploited communities. Sumando Ausencias is a public statement of mourning, but also of the desire for peace and the consequences of war. 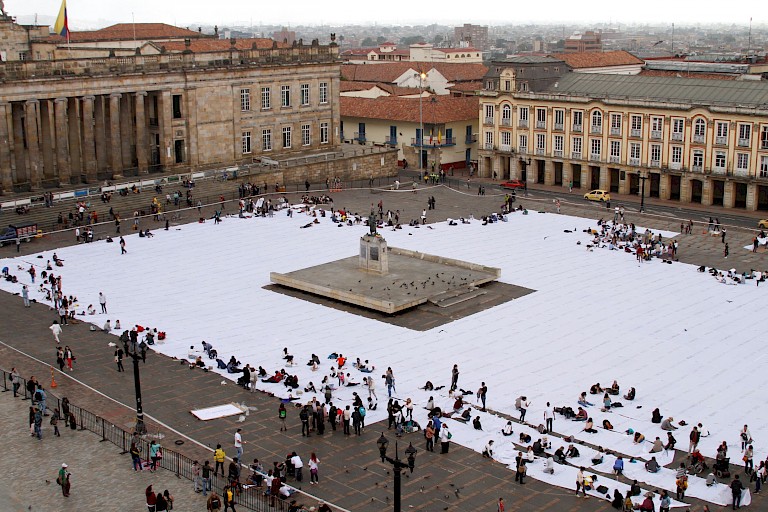 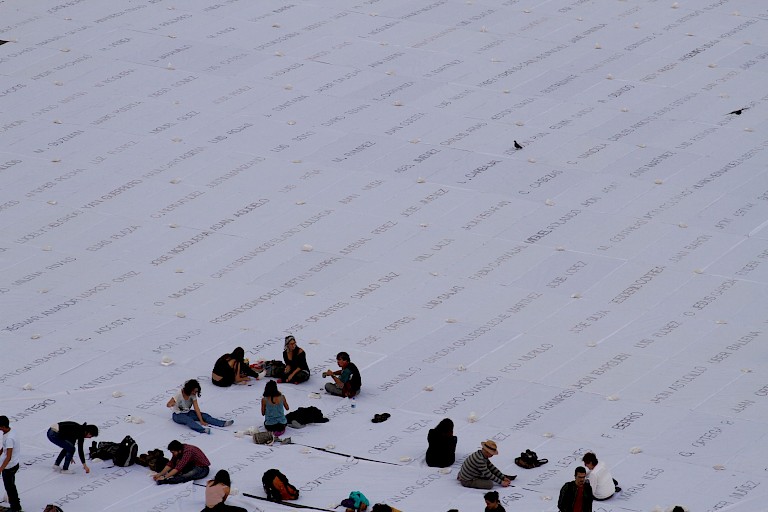 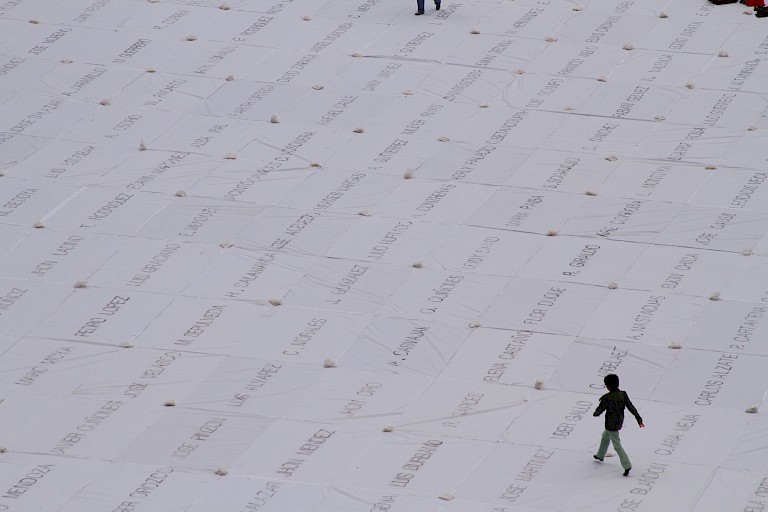 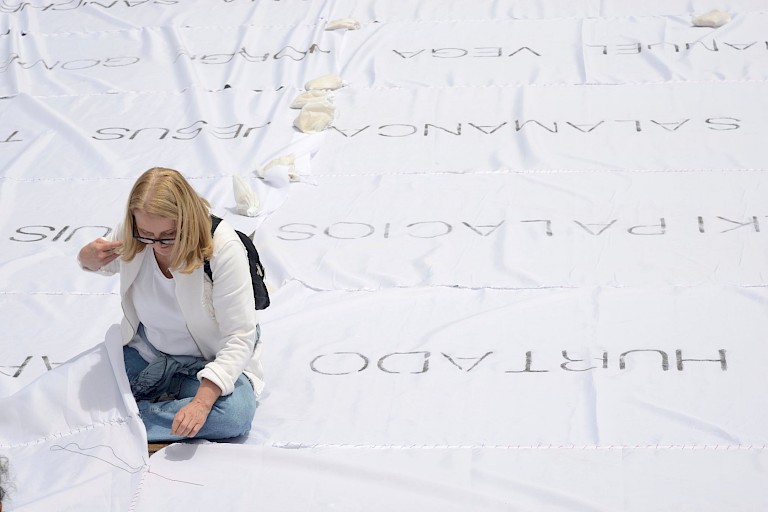 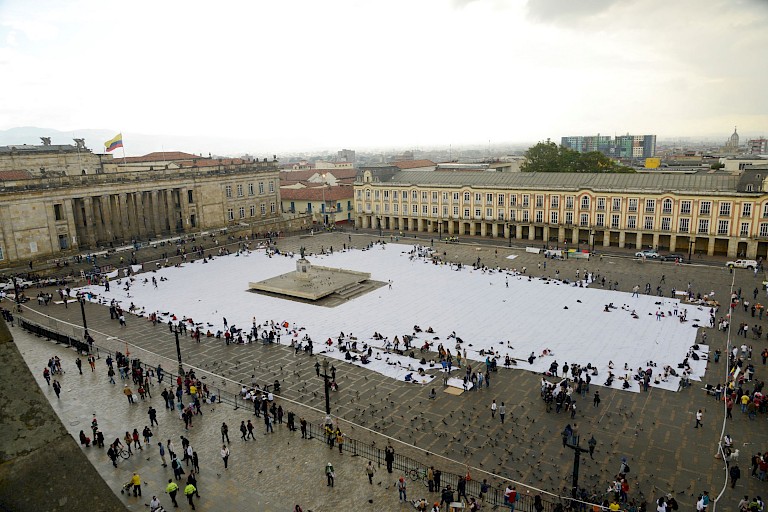 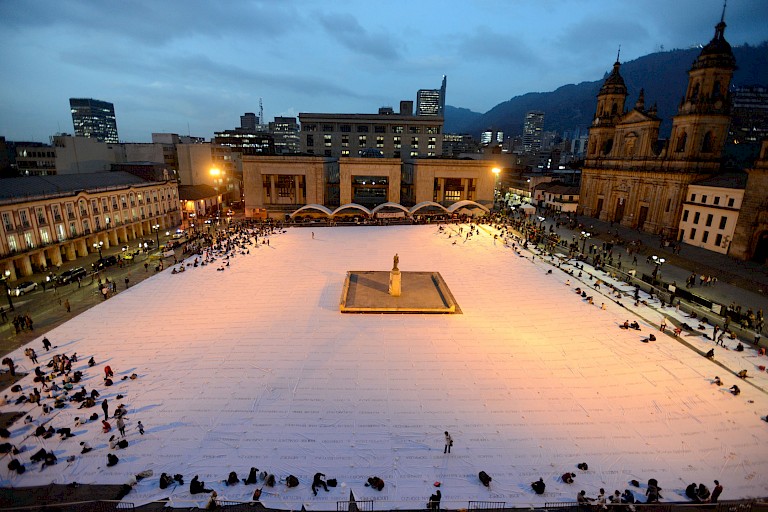