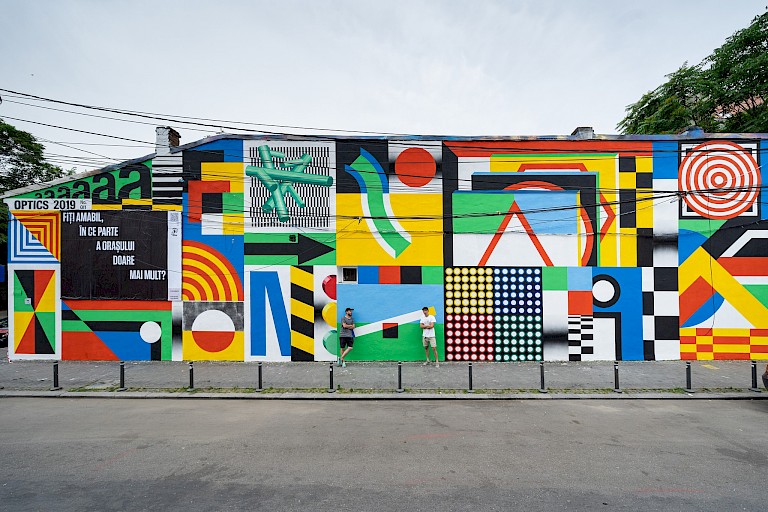 The city is the message

In 2019, Lost.Optics and Pren - under their crew name OPTICS GROUP - ignited the corner of Pictor Arthur Verona street in Bucharest, Romania, with an ode to the city. Commissioned by Street Delivery - the oldest and most important urban festival in Romania - and curated by art agent Elvira Lupșa, the mural worked as a reminder of the importance of urban interventions by artists. Its neat execution, in acrylic paint and spray, contrasts with the eclectic cityscape of Bucharest, which is a melange of art deco gems and contemporary architecture. The text on the black billboard is a verse by poet Claudiu Komartin -“Excuse me, which part of the city hurts the most?”. The two artists combined with finesse striking shapes and colors with soft three-dimensional gradients and hints to the city’s vocabulary (a slide, a traffic light, a direction sign etc.). This ensemble recites a visual poem responding to the festival’s 2019 theme: Poetry is in the Streets! 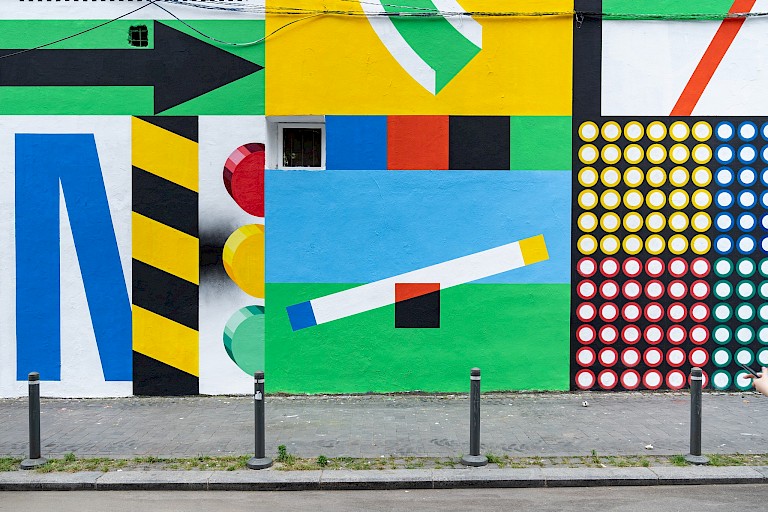 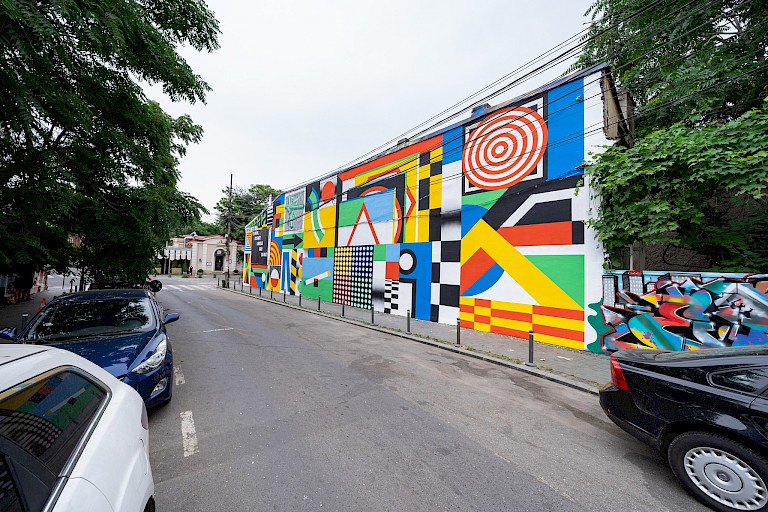 The mural The city is the message was created in 2019 during Street Delivery Festival, the oldest and most important urban festival in Romania, by Lost.Optics and Pren (under their crew name Optics Group), and curated by art agent Elvira Lupșa.

The Street Delivery Festival was initiated in 2005, by the Order of Architects in Bucharest together with the Bucharest City Hall, and it aimed at an urban and community revitalization of the cultural route of Pictor Arthur Verona Street. Starting with the spring of 2006, the project continues as a result of the collaboration between the Cărturești Foundation and the Order of Architects in Romania, joined by all those in love with the city and its valences, a social phenomenon and a manifesto in favor of reappropriating public space, a platform that connects people, creative groups, artists, architects, craftsmen and representatives of the active branch of civil society. 25 historical monuments are proposed for conservation and revitalization along the pedestrian route, only 12 being listed.

The Street Delivery Festival closes the access to the cars on Pictor Arthur Verona Street every year for three days, so people can enjoy the street. Every year, the organizers bring to the streets an issue of major interest in the life of the city, which to expose and debate: pollution, traffic, heritage buildings, digitization, lack of green spaces, possible gardens. After 13 years, in 2019, for the 14th edition of the festival, they “thought of taking a break from criticism and looking at the city with gentler eyes. Maybe-maybe we fall in love with him again. Because the city, like poetry, is fully understood when you meet it face to face, not bumper to bumper. When you create it, not when you look for its mistakes and inconsistencies.” So they decided not to comment on the city, but to compose it. With this in mind, the theme of Street Delivery 2019 appeared - Poetry is in the street!, which is closer also to the heart of a bookstore (Cărturești).

Lost.Optics and Pren were selected to build a fresco dedicated to poetry hidden among the streets of the city. The work, The city is the message, which was live on Verona Street for a year, is composed around the idea of a dynamic urban space, with multiple meanings, a city that speaks subtly to us, through its forms and compositions. The concept is found in the elements in the mural, taken in chromatic extremes, formally distorted, but specific to the metropolitan universe: a slide, a traffic sign, architectural details, lights indicators, letters, "nodes and signs". In their monumental collage, the city is not just a setting, but also an actor of our daily lives, one that deserves to be admired and thus revalued.

In the early ‘90s, the art of graffiti popped up in Romania as a way to protest the actions of the communist regime. Even though less than 1 year had passed since the reign of Ceausescu ended abruptly, the claws of the system didn’t fade away that fast. The Department of State Security, which was the secret police of the Socialist Republic of Romania, didn’t dissolve until 1991. The rebel youth of Bucharest started using graffiti as a mean to send messages to the local authorities, which were abusing their positions of power and to encourage people to link together. One of the first graffiti slogans used in Romania was “Jos Coșmarul”, which roughly translates to “Take down the Nightmare”, and was a reference to the ex-communist leader Nicolae Ceaușescu.

Over the years, graffiti was used as a form of protest against the corruption of Romania’s political class, targeting political leaders such as Ion Iliescu and condemning their selfish actions, or invoking legendary rulers such as Vlad the Impaler, who was well-known as “a man of unheard cruelty and justice”.

There are several other campaigns that were widely promoted through the use of graffiti and street art, such as “Basarabia Pământ Românesc”, (Basarabia Romanian Land), which was meant to support the union of Romania with the Republic of Moldova, or the ecological campaign “Salvați Roșia Montană”, (Save Roșia Montană), which was the first successful civic movement against a governmental action, and demanded the ceasing of all gold mining activities in the Roșia Montană area, because they posed great contamination risks on the environment.

Today, even if there are still artists who like to create controversy and highlight the problems in the Romanian society through bold statements made in public, there are others who use graffiti/murals to beautify the gray streets of Romania and turn them into true works of art. The mural The city is the message, created during the 14th edition of Street Delivery Festival, is one of these examples, which promotes, also, the interaction in public spaces, one of the creative methods of public art through collective efficacy.

As its known, public space is an important ingredient in every community: it provides opportunities for people to meet and be exposed to a variety of other people. Meeting often take place by chance, but they also can come through active organizing. The art of promoting constructive interaction among people in public space has been nearly forgotten in many communities. From planners, architects to public administrators, all have focused more in creating aesthetic places, on providing storage for the cars, in security or in maximizing their ability to observe and control people in public spaces, than on creating places that encourage social interaction. But this is not the case of the Order of Architects in Romania, which initiated Street Delivery in 2005, through which it aimed at an urban and community revitalization of the cultural route of Pictor Arthur Verona Street. Starting with the spring of 2006, the project continues as a result of the collaboration between the Cărturești Foundation and the Order of Architects in Romania, joined by all those in love with the city and its valences, a social phenomenon and a manifesto in favor of reappropriating public space, a platform that connects people, creative groups, artists, architects, craftsmen, representatives of the active branch of civil society. Every year new partners, public and privats, were involved in the organization, animated by originality, the remarkable visibility of messages and the strong relationship of ideas that are created on the street in the 3 days when traffic closes to cars and leaves room for architecture, culture and socialization in the public space. Beyond diversity, creativity and curiosity remain the efforts of a profession to stubbornly demonstrate that the city can be inhabited, built and exploited and otherwise, for the benefit of its community - a model to follow and reproduce.