The Library of Unread Books

The Library of Unread Books is an iterant library initiated by artist Heman Chong and producer and librarian Renée Staal. It is a members-only reference library made up of donated books that are unread by their previous owners. The cost of a lifetime membership to the library is the donation of one unread book. By receiving and revealing that which people choose not to read, The Library of Unread Books is a collective gesture that addresses the distribution, access and surplus of knowledge. The Library continues to grow through accepting unread donations, and in each iteration, it becomes a space for individuals and communities to donate, read and visit. Over 10 years, beginning from 2016,The Library of Unread Bookswill pop up in different institutions internationally before settling down as part of a collection in a museum. Currently, the Library has more than 2,000 books of various genres, subjects, languages.

The Library of Unread Books is a ten-year global project spearheaded by artist Heman Chong and producer and librarian Renée Staal. As the project's name suggests, it comprises donated books unread by their previous owners. First presented during Heman Chong’s artist residency at NTU Centre for Contemporary Art Singapore in 2016, The Library of Unread Books has since travelled to institutions and art spaces internationally, such as the Museum of Contemporary Art and Design (MCAD) in the Philippines and Casco Art Institue: Working for the Commons, Utrecht, the Netherlands, amongst others. As described by Chong, the impetus to start the project was when Staal and I "realised that many of our friends are in

the habit of buying lots of books and for one reason or another, not reading them immediately and in many instances, never ever going to read them. We like to tap into this resource of unread books as a way of opening up possibilities for someone else to read their books for them.” Theprojectisalsoverymuchinlinewithsomeof Chong’s previous projects that examine the production and distribution of knowledge which have resulted in the creation of social spaces for exchange. Such past projects include LEM1 taking the form of a second-hand science fiction and fantasy bookshop where visitors can browse and purchase books for 1 GBP each. The other is Because, the Night a non-profit, second-hand bookshop where 50 books are culled from a series of informal conversations with friends and strangers on Facebook. 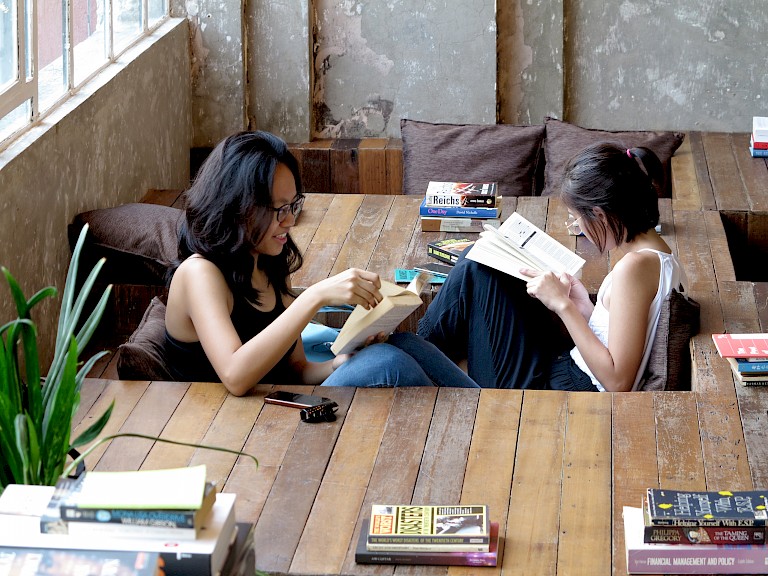 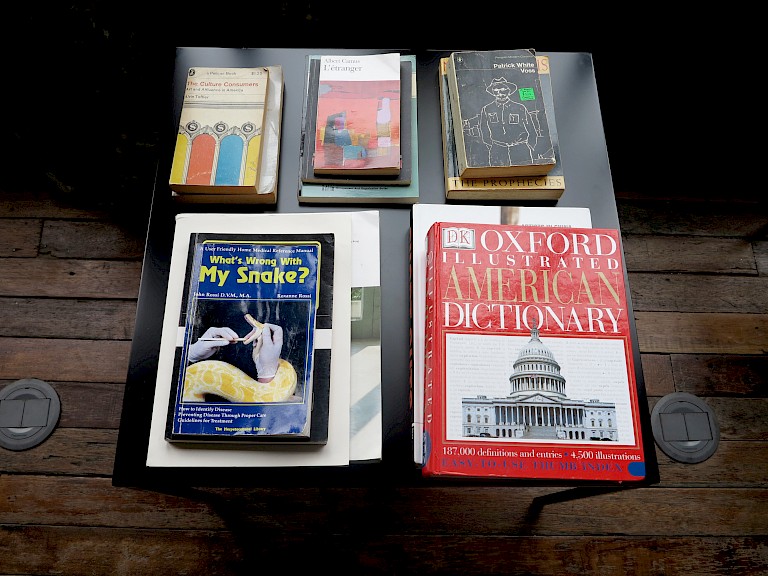 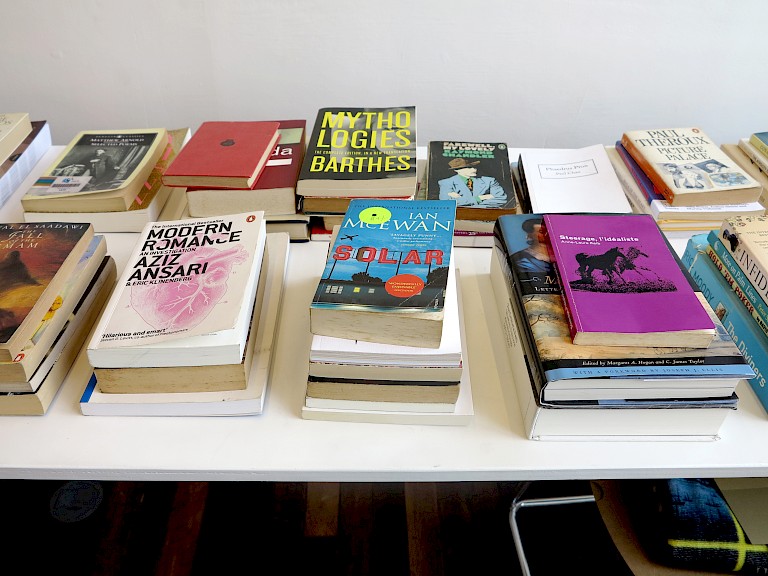 Consistent with the practice of Heman Chong that lies at the intersections of image, performance, situations and writings, The Library of Unread Books similarly is located at the interstices of conceptual art and a public programme. The project's journey began in Singapore during Chong's artist residency at NTU Centre for Contemporary Art Singapore (NTU CCA Singapore) in 2016. Since then, it has travelled to various institutions and artist-run spaces in Singapore, Asia and Europe these include Casco Art Institute: Working for the Commons, Utrecht, Netherlands (2017-18); Kunstverein Milano, Milan, Italy (2018); Jameel Arts Centre, Dubai, United Arab Emirates (2019-2020).

Transforming the residency studio into an artist-run space, The Library of Unread Books was open to visitors every Friday over six months from noon to midnight. Ran independently by Chong and Renée Staal, the donated books became accessible to anyone who visited the Library to create a commons. In addition to occupying the studio, the Library—then consisting of 300 books gathered across approximately half a year—was thereafter included in the NTU CCA Singapore exhibition The Making of An Institution before it travelled to the Museum of Contemporary Art and Design (MCAD) in Manila. Sent in balikbayan boxes—corrugated boxes often used by overseas Filipinos to send items back home—The Library of Unread Books was fittingly the inaugural project of MCAD Commons. An off-site space of the Museum, MCAD Commons is a site that facilitates the exchange of ideas, processes and explores the methodologies of contemporary art-making. The Library also inaugurated the programming of CASCO, Utrecht, under its new identity, CASCO Art Institute: Working for the Commons.

During its overseas sojourns,The Library of Unread Books has received support from its host institutions to produce access points to the project. The curatorial hospitality extends beyond providing resources for material and physical support and includes the processes of facilitating and receiving donated unread books and issuing membership to the Library. In each iteration of

the project, the host institutions also reach out to their networks, often through social media or traditional news channels, inviting individuals to donate their unread books either in person or sent in through post. It is through these informal connections that the Library continues to amass books in various languages, genres and subject matter. Over the next few years, the Library will continue to grow and expand before settling down. Presently, one edition of theLibrary—out of nine—has been acquired by the Singapore Art Museum (SAM). Chong is also in dialogue with other museums—or “hosts” as he calls them—to acquire other editions of The Library of Unread Books. As Chong explains, “what SAM is collecting is the instructions to run a library—how to set it up, how to collect the books... The Library Of Unread Books is not exclusively a physical library. It is an idea... Anyone and everyone can start their own library of unread books. That is our final goal, which is to see this idea germinate."

In view of state and economic models that privilege privatisation and ownership, the notion of the “commons” has increasingly gained relevance. The central concept of the commons is that cultural and natural resources are made accessible to all members of society and not owned privately. The commons is undergirded by collaboration, open participation, knowledge-sharing, power hierarchies and decentralisation. With over 2,000 titles, The Library of Unread Books, which continues to develop and grow, consists of books that were once privately owned and unread by their previous owners. Unlike institutional libraries, Chong and Staal's Library does not follow classification systems allowing for unintended and accidental discoveries. By bringing together books forgotten or shelved away by their past owners, the Library renders the once private resource public and brings them back into a common resource and knowledge pool. Aside from materials being made accessible to individuals who visit the Library, public reading groups and opportunities for sharing and

exchanging knowledge have also been organised by featuring selections from its eclectic collection. For example, reading groups were organised in English and Arabic at Jameel Arts Centre. Moreover, at Casco Art Institute: Working for the Commons an interchangeable and flexible space titled the Possibility Room served as a hosting space for various activities and gatherings arrange alongside The Library of Unread Books.

As such, by opening books up to the public and forming connections between strangers, theLibraryis also an expression of generosity.

Umberto Eco famously called for an “antilibrary” made up of unread books. The novelist and scholar claimed that unread books are far more valuable than read ones and that a library should contain as much of what one does not know as finance might allow. Upon visiting and spending time with The Library of Unread Books at MCAD Commons a visitor shares, “Why are we always drawn to the unknown? There is an element of surprise in every unread book, and it seems to me that the unread ones are much more important than those we have already read. I think one of the best feelings that I get once I have finished reading up on a book is that anticipation that builds up in me as I wonder, ‘what should I be reading next?’” The Library of Unread Books highlights the potential of the unread book, of text that has been left unencountered by its previous owner and shifting the perimeters of unwanted knowledge.