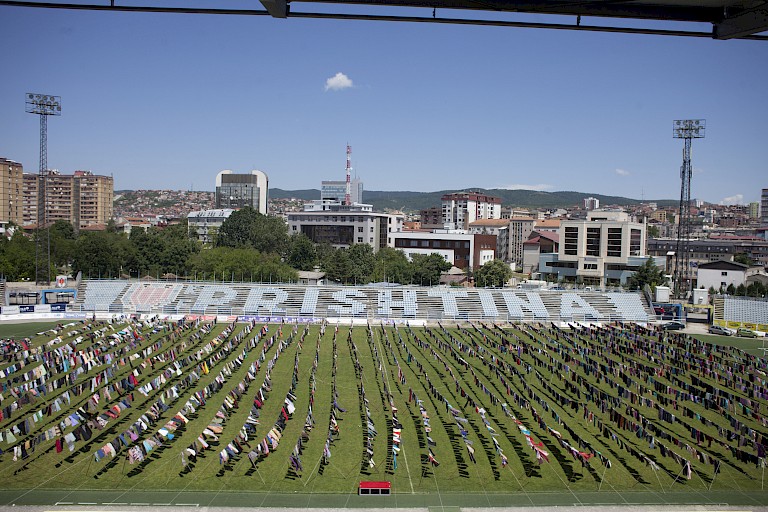 In 2013, coming across a TV interview about the survivors of sexual violence in Kosovo during the war, the artist “watched a woman, hiding behind a curtain, in the hope of remaining anonymous, sharing her traumatic experience”, talking about her story of sexual brutality which didn’t stop with the end of the war because “she was then stigmatized by the society in which she grew up in and loved”, being viewed “as a woman without honour”.

Thinking of You consists of around five thousand skirts and dresses donated by victims of the abuses, hung on washing lines across the National Stadium in Pristhine, the space par excellence of the men’s world, to free their voices and let them come out, facing the curtain. One of the dresses composing the installation was the one worn by the woman who was raped during the war. In the stadium field, women “were letting go of their fear, their emotion, and they were seeing how the community and the society were supporting them” .In the traditional social imaginary clothes hanging outside are women's business, but the artist managed to involve men and people of all generations in the making of the installation. By doing so, they participated to overturn that meaning: the social stigma and abuses are their business as well. 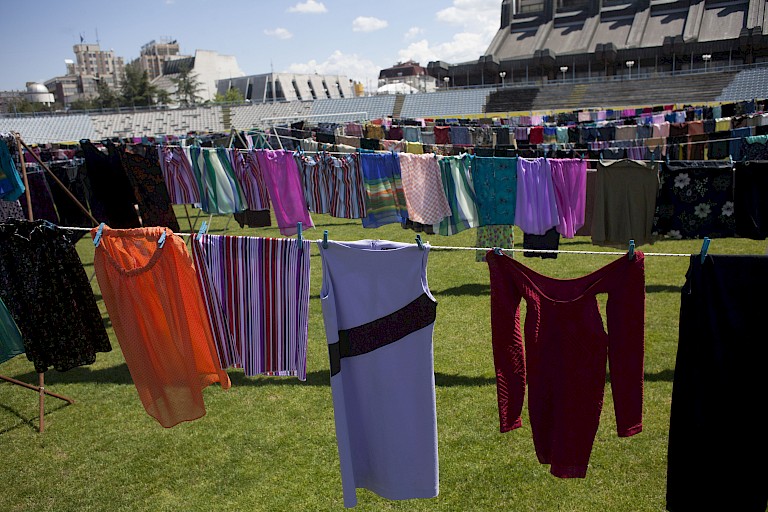 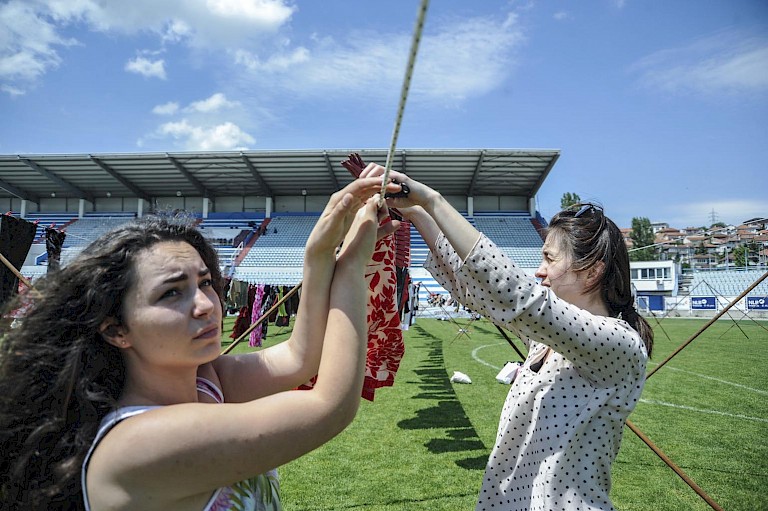 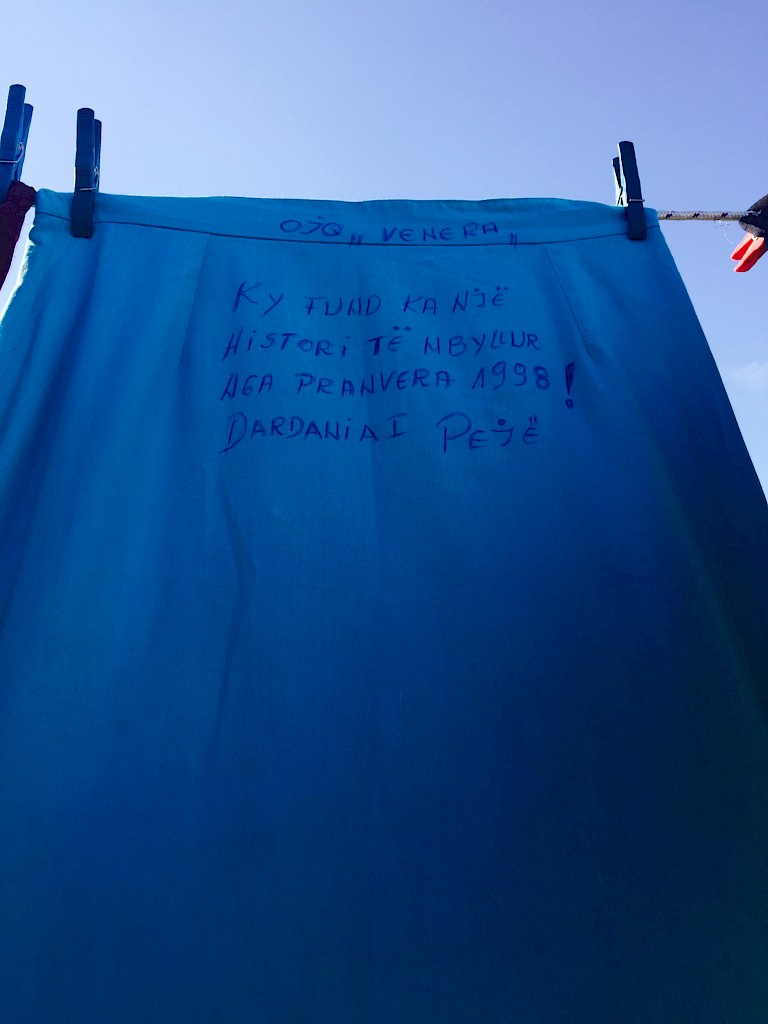 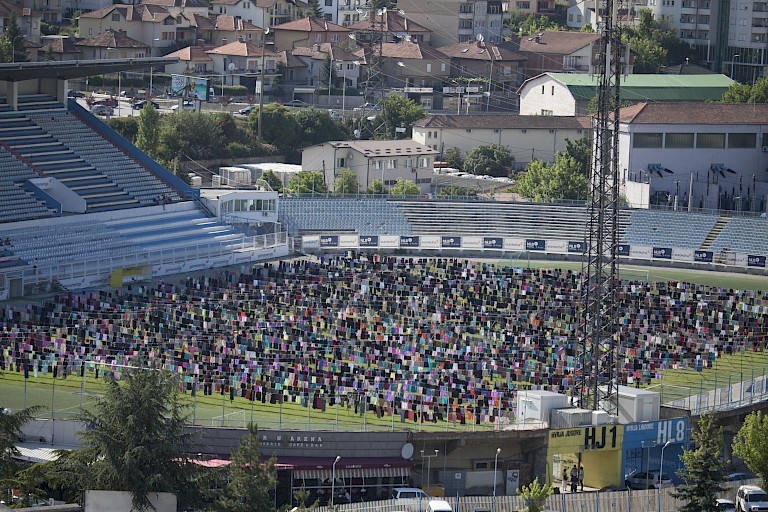 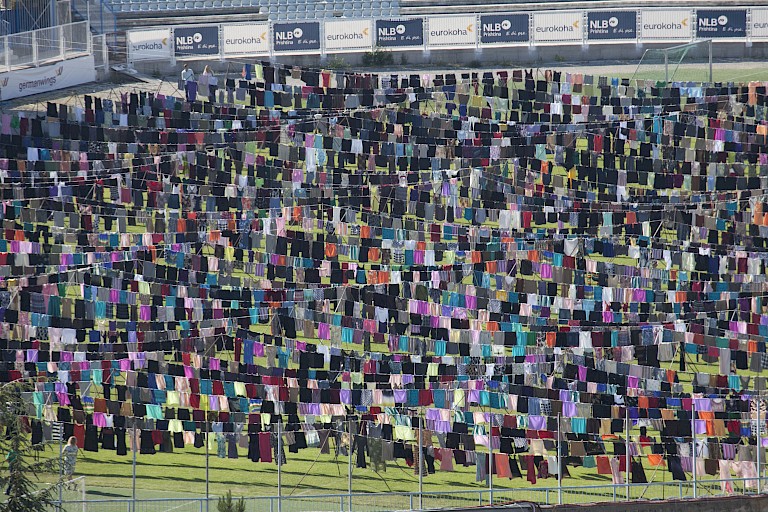 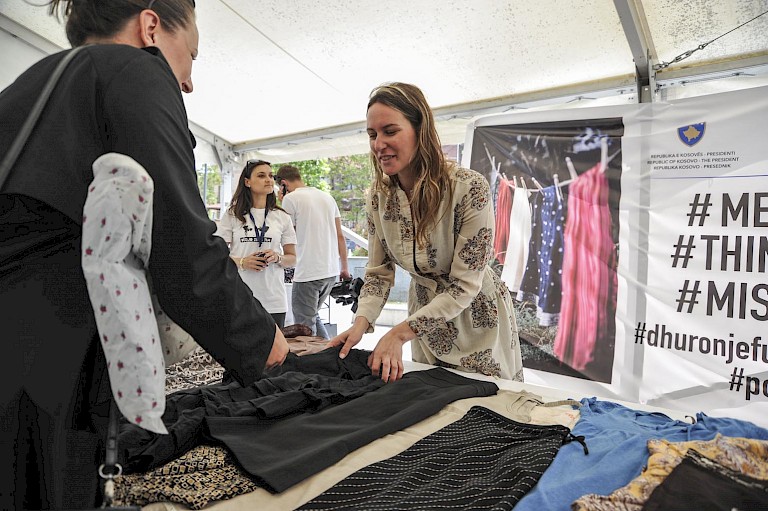 According to United Nations, in 2014, in Kosovo, around 80 per cent of all victims of reported domestic abuse cases were women, while 90 per cent of perpetrators were men, and that, according to the 42% of women and the 22% of men, “husbands are justified to hit or bit wives under certains circumstances” . Born and raised in Kosovo, Alketa Xhafa Mripa moved to London in 1997 to study Fine Art at Central Saint Martins. She arrived in London as a student, but she became a refugee when the 1998-1999 Kosovo war broke out.

The Kosovo War, started in February 1998 and lasted until 11 June 1999, was fought by the forces of the Republic of Serbia, which controlled Kosovo before the war, and the Kosovo Liberation Army (KLA), the Kosovo Albanian rebel group. The conflict ended when NATO intervened with air strikes in March 1999 withdrawing Yugoslav and Serb forces from Kosovo, to make way for the presence of the NATO-led international Kosovo Force (KFOR), which left when Kosovo's Security Force (2009) became self-sufficient, although its intervention didn’t succeed in re-establishing a multiethnic society, nether in solving the problem of redefinition of the borders, which is still ongoing. After the war, around 200,000 Serbs, Romani, and other non-Albanians fled Kosovo and many of the remaining civilians - between 10,000 and 20,000 people, local organisations estimate - were victims of abuse and rape, which were used as “weapon of war”, as denounced by Human Rights Watch . A milestone was reached in 2014, when Atifete Jahjaga, then President of the Republic of Kosovo from 2011 to 2016 - a lawyer specialized in Crime Science and the first woman elected president of the country - made the cause of victims of sexual violence and discrimination her very own, using her position to involve the government, parliament and associations in a coordinated effort to tackle the issue, help victims with a monthly income, and setting up the National Council for Victims of Sexual Violence. In 2012, she hosted the International Women’s Summit "Partnership for Change — Empowering Women", attended by 200 leaders from Kosovo, the Wider Europe, North America, Africa and the Middle East.

Since then, the artist worked with vulnerable communities of women to fight the reductionist behaviour of oppressive societies. More recently, she also initiated Justice Through Arts, a London-based association to engage people through arts in raising awareness and promote human rights issues and community values . Using different languages and media such as films and installations, paintings and photography, Alketa Xhafa Mripa has displayed her multi-faceted work in exhibitions across Europe and Kosovo. In 2015, she gained wider, global recognition with the installation Thinking of You.

Prehistorian and researcher Marylène Pato-Mathis situates this moment no less than the pre-Neolithic revolution, that is to say, before the affirmation of predominance of Man on nature, of Man as a producer (killing animals also to have a surplus), and of war culture, which changed also the social system and gender hierarchy establishing the subordination of women that today’s new waves of global movements such as #MeToo are, once again, trying to emancipate . Although there is no archaeological data that confirm the systematic existence of these scenes, Pato-Mathis explains, since prehistoric mural art we have been educated to see “the sexist stereotypes of the woman painted in the background, comparing the man, as surrounded by children and old people, in front of the grotto” as weak and dependent by man, who, on the opposite, is “armed, on the terrace of frightening beasts, he is strong, courageous, protective, standing”, while prehistory is a discipline born in the patriarchal society of the XIX century, of which our thinking is still permeated (Pato-Mathis, 2021) .

On a long-term level, the project shook the collective consciousness about the urgency to fight sexism as part of a wider collective movement that finally makes the struggles merge on a global level, as the only way for a cultural, social and political effective achievement, as the base of global art artivism today. Amazingly, the artwork and the artist’s tireless engagement against gender-based violence as a global pandemic, which Covid19 has eventually aggravated at a global level, finally contributed to the establishment of the International Day for the Elimination of Sexual Violence in Conflict. It has been established to “raise awareness of the need to put an end to conflict-related sexual violence, to honour the victims and survivors of sexual violence around the world and to pay tribute to all those who have courageously devoted their lives to and lost their lives in standing up for the eradication of these crimes”, recognizing that “Member States bear the primary responsibility to respect and ensure the human rights of all persons within their territory and subject to their jurisdiction as provided for by international law”.

In the installation, dresses and skirts are respectfully set one after the other, as players of a single team, occupying the entire field, leaving only the doors at opposite poles as free, since in the battle against social stigma there is no team, there is no game, and there is no match: everyone wins or loses.