Union of Hovels: the Survivor Syndrome

On the 18th of May 2018, on the anniversary of the deportation of the Crimean Tatars, the Hudrada curatorial collective gathered at Kiev’s historic St Michael’s Square to build the shell of a ruined hut from a Roma settlement which had formerly stood in the city. This work became a symbol for the shared fates of different ethnic and social groups who found themselves subjected to repressive actions in Ukraine. It was also a public protest against pogroms of Roma settlements. This work by Hudrada was dedicated to anarchitectural forms and to societies who create shanty huts in urban spaces, but above all it was a declaration against xenophobia and acts of aggression triggered by it. The construction was built according to the template of a ruined hovel that had been torn down in 2017 during the destruction of a temporary Roma settlement in Kiev’s Dnipro district. 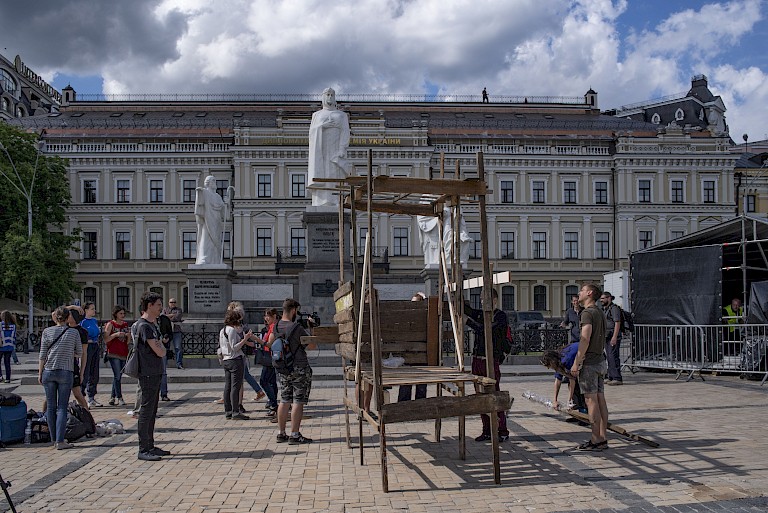 The Union of Hovels is a long-term project that started with a congress on the Lido Island during the 55th Venice Biennale in 2013. The gathering was dedicated to the idea of anarchitecture, which, to quote the curatorial statement, is “architecture without an architect, where the conventional vertical organization doesn’t work, and one person is simultaneously the “client,” designer and builder. This architecture is maximally effective, uses all available materials and capabilities, changes continually and reconstructs itself.”

Later, in 2017, Hudrada’s member Yevgenia Belorusets documented a Roma settlement in Kiev’s Dnipro district, an hour before it got demolished by far-right activists. As xenophobic trends in Ukraine’s capital continued to grow, the artists decided to make a public statement about it, using one of the Roma buildings as a symbol of protection for threatened ethnic minorities. Architect Diana Kosmina used one of the images from Belorusets’ documentation to design a precarious construction that was to be installed in one of Kiev’s central squares.

St Michael’s Square is located in between St. Michael's Golden-Domed Monastery, the Ministry for Foreign Affairs, and a luxury hotel. Right next to it is Sofiyivska Square with the ancient Saint Sophia Cathedral. In addition to being an eclectic and lively location, St Michael’s Square was an important place during the Euromaidan protests of 2013–2014, when St. Michael's Monastery opened its doors and hosted protesters escaping from the security forces. Placing a Roma hut-inspired installation there mobilized the complex contexts of this place, reminding that in different circumstances anyone can become a victim of brutality and injustice. As the artists state, “the shanty hut embodies the vulnerability and fragility of communities who arrive and disappear spontaneously. At the same time it can become a disquieting object when set against the logic of the majesty of monumental symbols of power.”

The installation of the hut was itself a public event, joined by the members of Hudrada collective and their supporters. However, the installation process was disrupted by representatives of radical right-wing organizations who attempted to summon the police and claim that the project was illegal. The artists, however, succeeded in completing the installation and engaging with a number of major media outlets that covered the story (including Radio Free Europe/Radio Liberty). As a result, the Survivor Syndrome became one of the precedents for further peaceful demonstrations defending non-violent public space in Kiev.

The artists explain their choice of a title for the project in the following way: “Survivor’s Syndrome is a term which emerged in the 1960s as a means of describing the condition of both victims and executioners (as well as their children) who had lived through large scale persecutions and mass murders during the 20th century. The defining element of this syndrome is that its sufferers experience sharp feelings of guilt connected to no more than the fact that they are alive and in existence.” The mission of the project is to highlight the importance of peaceful cohabitation of various ethnic groups and the role of experimental architecture in this process.

The Survivor Syndrome, while being a transitory, precarious project, manages to produce a powerful message and create momentum. First and foremost, it is an artwork that meaningfully engages with the public space and serves as a litmus test for its current diseases. It points to the underrepresented members of the society without exploiting their particular image, status, or identity. It does not aim at any direct and immediate improvement of their status but works on a broader scale and in a more sophisticated, symbolic way.