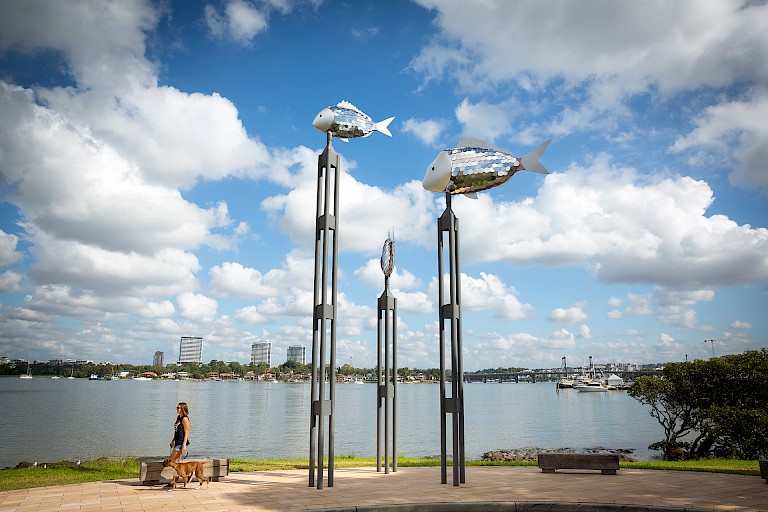 One element of a greater riverside reinvention project, the Wallumai Wind Sculpture, contributes to bringing Aboriginal voices and history back to the area. The City of Ryde appointed a public art team lead by artists and public art consultants Susan Milne and Greg Stonehouse working with Aboriginal artist Chris Tobin to capture a vision for a river-walk project paying tribute to the city’s indigenous heritage. Aboriginal for “snapper,” the Wallumai Wind Sculpture celebrates the importance of the fish for local indigenous groups. Located along the Parramatta River, the work refers to the rich natural environment once enjoyed by Aboriginal people and early Europeans before the river was exploited.

Three wallumai sit high off the ground atop metal structures on the riverbank. Taking the iconic and easily identifiable shape of a snapper, the fish have smooth heads and glistening bodies constructed from a formation of sequined scales. The sculptural wind vanes turn with the breeze and their shimmering scales reflect their surroundings and the shifting weather conditions. Placed together as a school of fish at different heights and dimensions, they offer continuously changing views of the water, land, and sky. Sometimes the fish appear to swim in the river, at others they turn inland with the breeze, connecting land and water and their comingling of histories. 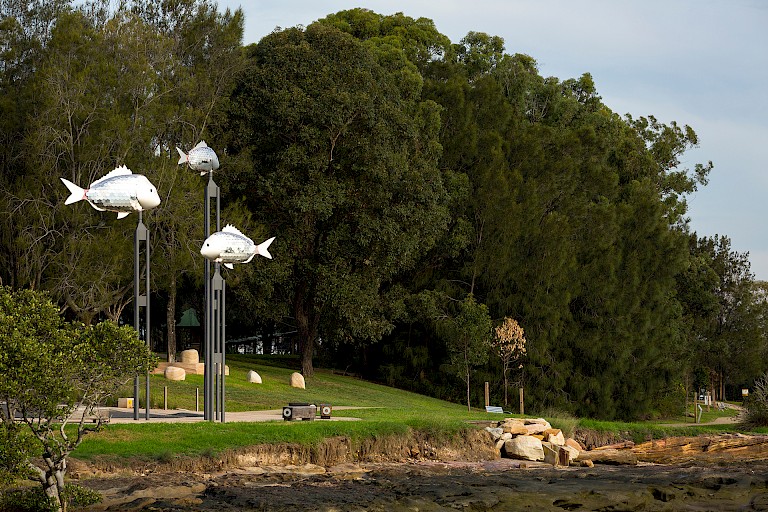 The use of the wallumai is derived from the Wallumedegal clan that inhabited this area. The artists drew from the Aboriginal engravings and drawings that simplify the characteristics of the snapper while still retaining its characteristic skeletal structure. The work represents the traditional totem of the area’s original inhabitants, the Wallumedegal people. It is likely that the clan’s name derives from the word “Wallumai” and “matta,” a word denoting a place. Those living on the southern side of the river, in what is now the Ryde area, were therefore the snapper fish clan. The river and its aquatic life not only sustained the Wallumedegal physically. It was intrinsic to their culture, identity, and way of life, and this is reflected in their adoption of the snapper as their cultural totem. As an artwork, Wallumai Wind Sculpture becomes a symbol of the local identity of Aboriginal people, their fishing practices and the rich marine life migrating and feeding here.

Aboriginal identity and consent is integral to this work and the larger context within which it sits. A public art team led by Milne and Stonehouse working with Tobin presented and discussed concepts with local Aboriginal groups before Ryde Council adopted the plan. The first realization of the plan was the Wallumai Wind Sculpture. This sculpture commences the overall aim of the Riverwalk to create a high quality public space along the foreshore through the installation of permanent contemporary art works that reflect the history, stories, and values of local Aboriginal communities. This is intended to create greater community awareness of Indigenous people, their custodianship of the land, and presence in the Ryde community.