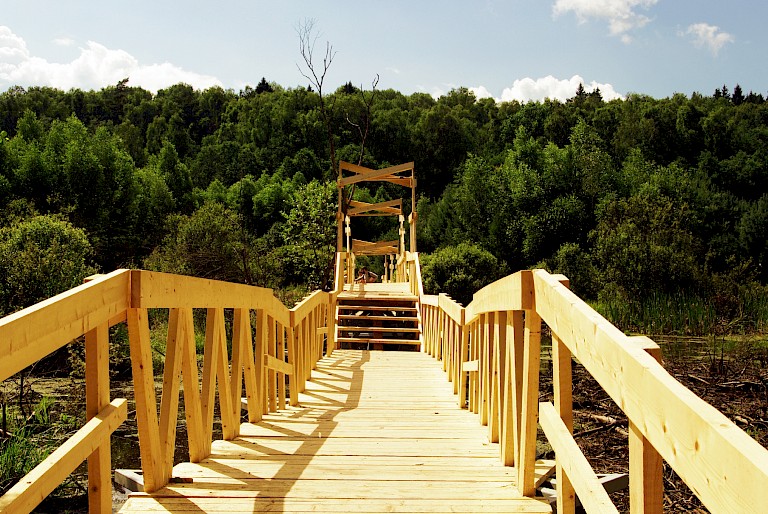 The Knitted Bridge is an environmental architectural project created in order to connect Zvizhi village and Nikola-Lenivets Landscape Park, crossing the swamp that formed after beavers had built a dam on a small river in the vicinity. The bridge was designed specifically to safely connect the two banks above the backwater without interfering with the local fauna — and in such a way that the various elements of the construction would have a sufficient degree of mobility to adapt to the ever-changing unsteady relief of the swamp and seasonal fluctuations of the supports. The Bridge is a living object introduced into the environment and gradually becoming a part of it, changing and living with it perpetually. 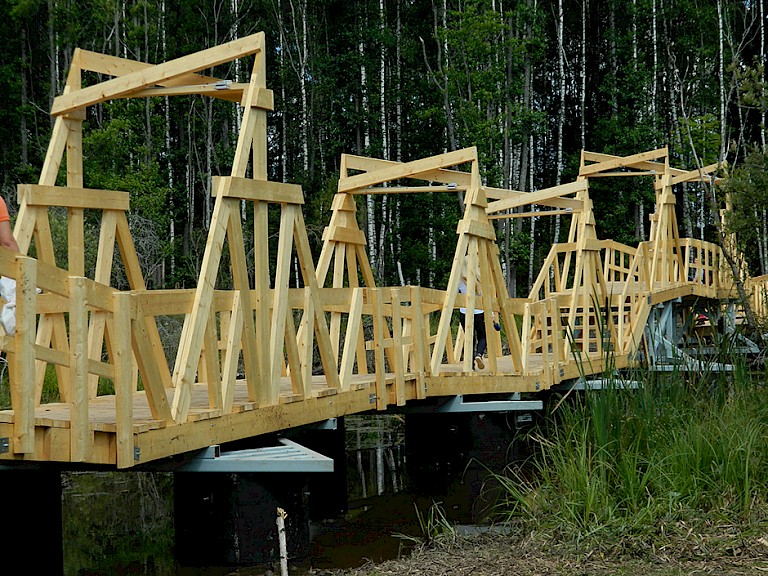 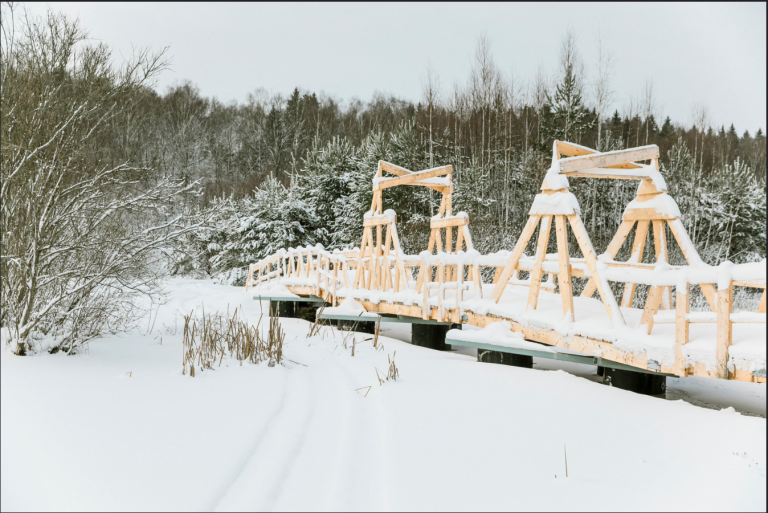 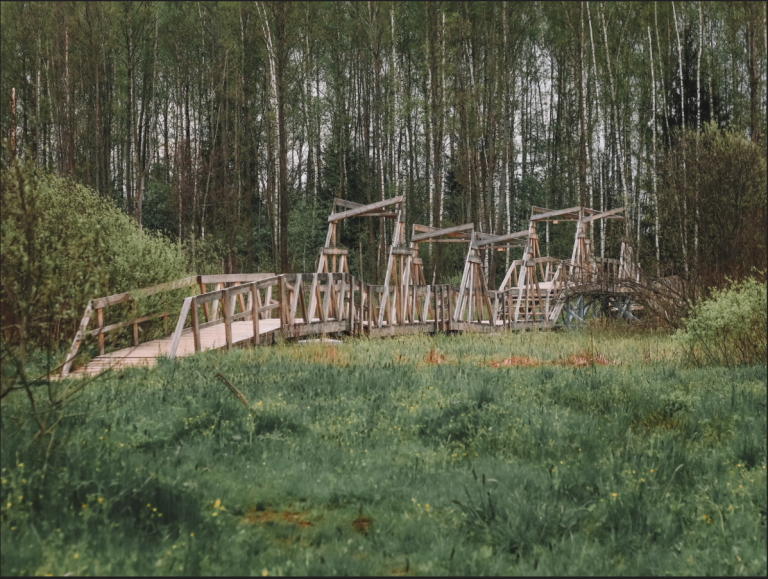 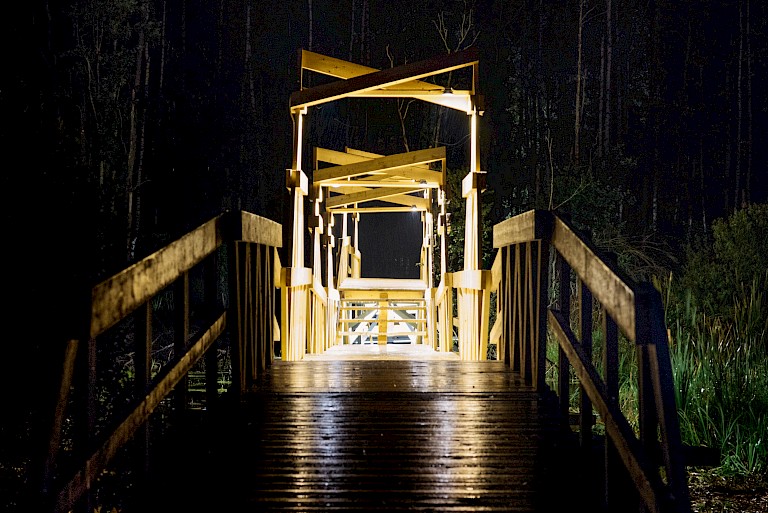 The Knitted Bridge was created as a commission for Archstoyanie, a famous land art festival in Nikola-Lenivets, Russia. This wooden bridge built over the backwater connected the two main venues of the festival, Zvizhi village and Nikola-Lenivets Landscape Park. The path between the two locations passes through a lowland, along which a small stream flows. The beavers living in the vicinity built a dam there, and the stream spread out, creating a swamp and making the place impossible to cross.

The team of the Wowhaus bureau, under the supervision of Oleg Shapiro, developed an "elastic" hinge structure that allowed the construction to adapt to seasonal changes. The idea was to create a wooden bridge over a swampy place that would provide people with easy access across the territory and at the same time let them get close to the local fauna and flora, watching it from the height of the bridge or going down to the bank of the stream. The bridge acts as a unifying structure. On the one hand, it is a functional object and part of the route of visitors to the landscape park, on the other hand, it is a meditative setting. The flexible structure of the bridge allows it to adapt to the landscape and become a part of it, dissolving into the landscape.

The Knitted Bridge project was developed by a team of eight young architects under the direction of Olga Rokal and the Wowhaus bureau's founder Oleg Shapiro. According to Olga Rokal, "The Bridge is both a way to connect the two banks of the swamp and a symbol of the union between the natural and the artificial: people and beavers, metal and clay, ornamental shrubs and native mosses and reeds. Additional smaller wooden bridges can be built on and attached to each other almost endlessly, forming both ways to move from one bank to the other and platforms for observing nature. Over time, both the outlines of the backwater and the shape of the bridge will keep changing slightly."

In parallel with the construction of the bridge, the architects also manufactured a so-called "geo-grid." Residents and volunteers spent over a month joining together long strips of roofing sheet scraps. The resulting net was placed on the bank of the stream, on both sides of the bridge. The part of the structure where people would walk was covered with gravel, the rest of the cells were filled with sand and earth. Further on, the cells were filled with specially selected local plants: mosses, sage, feather grass, and sedges. Later on, the spots along the bridge were equipped with small recreation areas so that people could safely walk down to the stream and admire nature.

According to Oleg Shapiro, “The Knitted Bridge is not only a functional construction but rather a meditative object and a multi-layered statement. The bridge is mobile, just like the nature around it. Just like a life cycle, it is subject to constant change. It is also the path connecting the two banks: one way interrupt it in the middle and walk down to the water to spend some time alone, watching the beavers and the river. And being there, one feels comfortable and safe, as if in a refuge. With this construction, we connect wildlife and humans."

The Knitted Bridge has great value as an ecologically-conscious, sustainable architectural project that also remains playful and engaging. Being planned for long-term functioning, it takes the idea of organic change and transformation to a practical realm, showing how these aspects can be beneficial for the construction, for the public using it on a daily basis, and for the natural environment that hosts it. The idea of building bridges, however simple it may appear, is one of the most relevant throughout the vicissitudes of human history. The Knitted Bridge serves as a powerful metaphor for what such bridges should be: resilient, location-sensitive, open to modification, and thus practical and long-lasting.